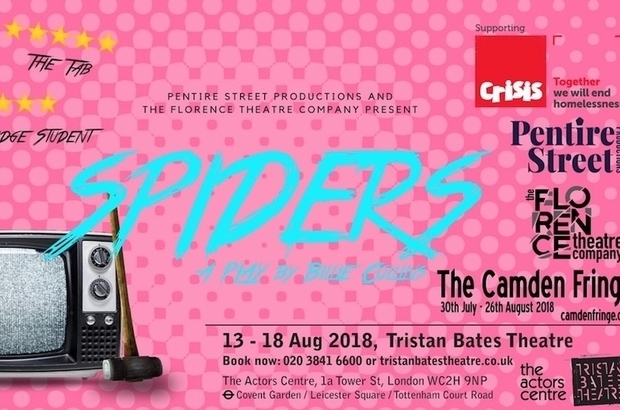 Spiders, a new play by student writer Billie Collins, examines homelessness through the incident of a rough sleeper refusing to accept another’s help. Harry (Sam Parkinson) has been homeless for years, squatting in an abandoned house, but Mia (Caroline Elms) has only recently run away from her ‘okay’ family and wishes to help Harry get out of poverty by applying to college or reaching out to his estranged sister. Despite its strong characters and dealing with an under-discussed issue, the final message of the play is ambiguous, interpretable in various ways, and this uncertainty is its main weakness.

Most striking is the dynamic between the characters. In their shared experience of homelessness, the two have come to spend every minute together – they go from laughing and playing silly games together to fighting and storming out on one another in mere moments. Harry’s anxiety comes across in Parkinson’s body language, cradling his arms and making himself smaller. This behaviour is triggered whenever leaving the ‘flat’ is mentioned – having lived rough for so many years, he cannot comfortably imagine a different life for himself. Despite being smaller in stature and younger than him, Elms’ Mia holds herself with more confidence and self-assuredness – we can infer that her ease stems from knowing she could go home.

The intensity of the relationship is exacerbated by the set design. The dark studio, lit only by a flickering electric light, heightens the tension. In this dim and claustrophobic space Mia and Harry are hiding from the world. It’s clear why Mia would want to help Harry leave this rubbish-strewn dingy apartment, yet the design also creates an idea of homeliness; with ‘HARRY’ graffitied on the wall and his television where he loves watching documentaries, we understand his desire to stay. The gulf between their experiences is captured in their contrasting attitudes to the space, and is the key behind Mia’s failure to understand why Harry would not want to improve his life.

Such differences between the characters’ upbringings and outlooks are most starkly exposed by a subplot morality problem.. Harry mugs a man after he refuses to give him ‘a tenner’ and then steals £500. His argument is that the Mercedes-driving victim could clearly afford it, yet Mia is scandalised – Harry enters wearing a blood splattered shirt, revealing his more violent side to both the audience and Mia. Given the short one-hour duration of this play, this subplot is unfortunately lost to more major events, but we see that despite their friendship, Harry and Mia have some fundamentally different beliefs.

Mia’s character is occasionally contradictory and the reason for her getaway changes several times, leaving us unsure of her true motives: she may have run away purely to help Harry, or she may have been bored by her ordinary life, or stressed by her parents’ separation and her brother’s illness. Mia wishes to live more like spiders, obeying basic animalistic needs and experiencing a real life, which she is unable to find in high school. However, this ordinary life is what she desperately tries to get for Harry by starting his college application, for example.

The play ends up slightly confused by Collins juggling too many ideas: perhaps she is drawing attention to Mia’s ungratefulness in leaving what was a decent life compared to many, and her presumption that she can help Harry; yet Harry also seems irrational in refusing her helping hand. The strongest message of the play is that we cannot assume that everyone wants the same things: Mia is wrong to presume Harry will be grateful to her. While the varying messages leave the play open to interpretation, what Collins was primarily aiming to convey becomes blurred.

The relationship between Harry and Mia is the strength of the play. We watch them navigate their differences and similarities, Harry’s refusal of Mia’s help reminding us to remain open-minded by not imposing our own assumptions on others. Spiders does not go where we expect; the constant twists in Mia’s character and numerous potential meanings make it slightly incoherent. Nevertheless, the acting and tumultuous rapport between the characters keeps the show engaging throughout.