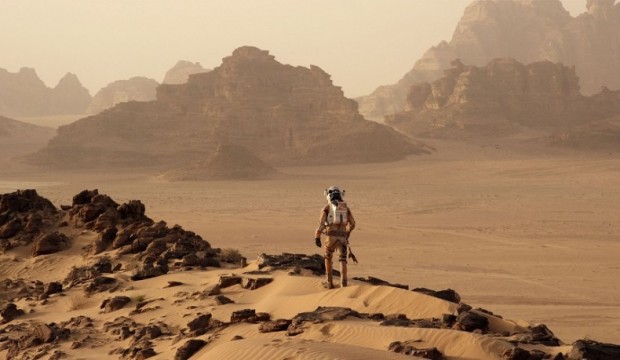 This is a blockbuster that should be celebrated. Not only because it will make you nod, laugh and fist-pump while Matt Damon just gets stuff done. Not only because the Martian vistas are beautifully realized by director Ridley Scott and cinematographer Dariusz Wolski. But because, above all, The Martian promotes science and intellect, as opposed to the irrational, impulsive status quo that has typified big budget films in recent decades.

The Martian arrives at an intriguing time for pop science. The balance between cinematic spectacle and scientific accuracy is being increasingly debated, with films such as Gravity and Interstellar bringing the ‘science’ in science-avfiction to the fore. The Martian’s publicity campaign received a boost when NASA reported liquid water on Mars shortly before the film’s release. What resulted was a huge box office return, alongside surprise calls for Oscar nominations, as audiences grow curious about what is possible with today’s science and technology in cinema and in outer space.

Damon plays Mark Watney, a botanist faced with survival on Mars after the failure of the Ares 3 mission. Simultaneously, Jessica Chastain’s mission commander Melissa Lewis must battle the guilt of leaving Watney behind and focus on how to ‘bring him home’.

The film has an ensemble cast, which defines the narrative in itself; beforehand, we know that Damon won’t die, that Chastain won’t disappear after the mission initially fails, and that the likes of Jeff Daniels, Kristen Wiig, and Donald Glover will have some kind of positive influence. Ridley Scott knows this isn’t the time for playing with audience’s expectations, but rather the chance to entertain— and he does so with the wit and verve lacking in his recent films, namely Prometheus and Exodus.

Francis Ford Coppola once said that ‘art depends on luck and talent’. Scott’s luck may well have come in the form of NASA’s announcement in September. But what makes this film a work of entertaining ‘art’ rather than a forgettable blockbuster is the talent involved, with the ensemble cast and a strong script by Drew Goddard, adapted from Andy Weir’s novel, working harmoniously.

It is all driven by Damon’s charisma, which imbues the film with a light touch and maintains its joy throughout. With the audience expecting a happy ending, watching The Martian becomes equivalent to completing a jigsaw puzzle: a problem-solving journey where each successive challenge becomes its own micro-narrative. These micro-narratives are strongly human — verging on pathetic — as Scott revels in dryly highlighting man’s insignificance in the cosmos. Watney competes with the universe using duct tape, excrement and a sense of humour, as oxygen, food and warmth become his prizes.

Some might see the film’s consistent humour as discordant to the scenario — after all, this is a man alone and really, really far away. But what struck me was the realism of Watney’s actions despite this adversity. The Martian has found a balance between the melodrama of Gravity and the overt grandeur of Interstellar, tempering dystopian dread with the innately human response of doubt, fear, disbelieving laughter and immediate action.

Scott manages to keep the Robinson Crusoe/Castaway narrative interesting despite its isolated premise, expertly developing the parallel action on both Mars and Earth. Video diaries allow Watney to seamlessly become a self-conscious, sarcastic narrator, maintaining modernity and sanity while shots of the arid orange landscape — awe-striking yet horrifying in its beauty — are interspersed. The film’s 142 minute running time rushes by, consistently intriguing as Damon battles the elements.

The Martian should be expected as an Oscars contender, satisfying audiences and critics alike in how it inspires scientific intrigue while remaining a cinematic pleasure. Not since Whiplash has the climax of a film pleased me so viscerally, even if its conclusion could have been predicted. Scott’s film is the return of the smart blockbuster, Spielberg-esque in how it takes a horrifying situation and presents it with childlike awe, solving problems step by step.

‘The Martian’ was released in cinemas in September this year.