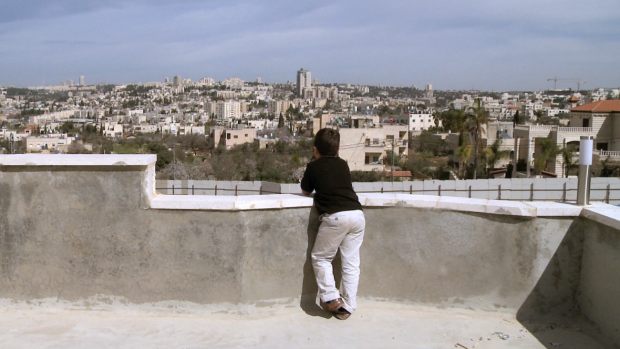 There’s a brief shot towards the end of P.S Jerusalem that neatly encapsulates the film. Documentarian Danae Elon shows her baby son (named after her father, the late Israeli intellectual Amos Elon) as he naively crawls around outside, unaware of the serrated thistles of barbed wire coiled near his head. It is a shot that’s loaded with meaning: Danae’s family have relocated to Jerusalem from Brooklyn in the hope of reconnecting with her past, and here is her father’s namesake, a cherubic youth, entirely oblivious to the complex whorls of violence that agitate the world he is to inherit.

So it’s a great shot – but it’s also real life, and why is this mother letting her child play so close to razor-sharp wire?

This is the tricky, problematic core of the film, which is a simultaneously fascinating and frustrating endeavour. Danae, who appears on screen only once, remains the disembodied figure behind it all, taking her family into an alien, hostile environment in order to fulfil a personal quest – albeit one that isn’t entirely clear to the audience, and doesn’t always seem to justify the emotional toll it takes upon those in front of the camera.

As a filmmaker, she certainly has a great eye for simple, allusive moments. The film is bookended by two parallel scenes depicting her children gleefully waking up to a bed of untouched snow, firstly in New York and then Jerusalem; these shots are almost too perfect in underscoring the film’s themes of relocation and innocence. There’s footage of her father from a high school short film, dressed clumsily in corduroy and a puffy jacket, tearing out pages from a book whilst sat on a park bench. It’s a great, comic snapshot of the impassioned political academic, a man who used to forbid his daughter from having right-wing friends, and whose repeated wish – that Danae should “never return” to Jerusalem – haunts the film.

To Amos, “the personal was always political”, we are told; and P.S Jerusalem does a good job of depicting the complex ways in which the micro meets the macro. In particular, we witness the slow encroachment of reality upon the life of eldest son Tristan, a curly-haired, energetic boy whose searching questions animate the film. Early on we see him finding a gas mask in their home and putting it on, amused by its appearance but ignorant of its import. Yet he can’t remain innocent forever; as the three years progress, he becomes increasingly aware of the religious tensions insidious in Israel, and inescapable even at his inclusive, bilingual school (called Hand in Hand, the school fell victim to a “Price Tag” arson attack in 2014.)

Tristan is beaten up by Palestinian boys, and is quietly troubled by their assertion that “Arabs are the smartest”. There are frequent air raid sirens, and at one point he remarks, with devastating acuteness, that “when grown-ups are scared they just start to laugh”. He sees more than we’d like – perhaps more than he should.

Danae’s partner Philip is the most tragic figure in the film. A French-Algerian Jew who appears too Arabic for the Jews and too Jewish for the Arabs, he finds Jerusalem an alienating place. As the film advances, he appears increasingly haggard, but stoic. Halfway through the film he admits “I’m lonely” – although this scene is placed like some form of revelation, it comes as no surprise. “I don’t feel like Phillip anymore,” he wearily states to Danae, his chair pointedly angled at 90 degrees, his dark eyes lost somewhere out of the window.

Danae does show some reservations about her role as film-maker. Whilst filming a Palestinian family about to be evicted by Jewish settlers, she acknowledges: “I chose to be here; the Palestinian family had no choice but to accept my gaze.” The family’s plight is awkwardly sidelined, and, in between shots of diggers dismantling their home, we see close-ups of their faces staring at the camera in bafflement, perhaps annoyance. This underscores the fundamental difference between a Jewish family choosing to live in Israel for personal reasons, and the rest of its inhabitants: to most the struggle is a daily reality, not a subject for speculative documentation. As Phillip sees it, Jerusalem to their family is “an accessory, not a raison d’etre”.

So what is it all for? Danae quotes her father at one point, explaining, with uncharacteristic sentimentality, his reluctant affinity to Israel: “what is homeland if not the place where you kissed a girl for the first time?”. At times, Danae seems to be chasing a similarly idealised view of her Jerusalem, of some irretrievable past – her repeated hope for her children is for them to find “a place in their heart where they don’t have to feel ashamed of who they are”. But will they emerge from these experiences with a more grounded, empathetic sense of self? Or will it result in something more complex and conflicted? It’s impossible to say.

In one revealing voiceover, Danae says that she was drawn to film-making as it allowed her to both “record” the chaos of the city and somehow “absolve” herself from it. Whether or not the lens does create such a moral distance is a fraught question. Nonetheless, P.S Jerusalem is an engaging, emotionally-involved film, although sometimes this is in spite of itself. There’s a warning here – moving contrapuntally to the filmmaker’s aims, perhaps – about the dangers of making others complicit in one’s own narrative. “Maybe this is a guilt-trip which does not belong to them,” she idly remarks about her sons. Respecting other people’s narratives whilst simultaneously honouring your own is a tricky business, but one has only to spend a couple hours in Jerusalem to glimpse its colossal importance.

‘P.S. Jerusalem’ is showing at the Human Rights Watch Film Festival on March 14th at Picturehouse Central, followed by a Q&A with Danae Elon. Tickets are available here.