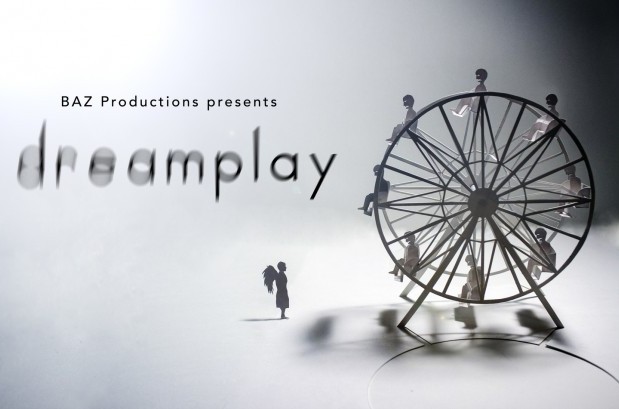 HANNAH GANECKI reviews ‘Dreamplay’ at the The Vaults Theatre.

‘Dreamplay’ is a fantastical mirage of your deepest insecurities. Hearing the cries of man, Agnes has fallen from the Vedic gods in search of the answer to the question of human suffering. As a member of the audience you are the dreamer, you follow Agnes (Jade Ogugua) as she meets the characters that drift through your subconscious, representing the ceaseless fear, shame and loss of the human condition. Inspired by the poetic and magical absurdity of surrealist August Strindberg, Baz Productions has tossed and turned his 1907 dream world into the 21st century.

Diving into the labyrinthine Waterloo tunnels, you encounter numerous characters that emerge, dissipate and transform as part of the performance. From the strict school teacher to the weary husband, the scorned housewife to the depressed accountant, these distorted archetypes highlight how the strange visions and feelings that emerge in your dreams are influenced by real life experiences. ‘Dreamplay’ plunges you into the waves of your emotions, sweeping you through a proposal of love with all its imperfections, to the school detention of your nightmares. Brief interludes of dancing allow you to catch your breath; the actors restlessly whirl and float to the echo of Laura Moody’s soprano. She is a siren, the sublime range and rich texture of her voice makes her call dangerously irresistible.

Moody’s constant on-stage presence is a reminder that the different interactions are all part of one dream, and one subconscious. She uses her cello to portray the internal rhythm of each character; when the actors transform from one character into another, Moody blends into a new motif.

The evolution of Michelle Luther’s character from the child, who openly yearns for her mother’s approval, into the lover, who fights to disguise her insecurities, is an example of polished musical and dramatic collaboration at its best. Her crying, fist-pounding and foot-stomping ceases at the sound of a cello. Hypnotised by Moody’s syncopated melody, Luther raises her head, slouches her hips and a smile tickles the edge of her lips. The small and abrupt movements of the child elongate into the smooth and sensual movements of the lover. Every step, flick of the hair and tilt of the head is perfectly synchronised with the rhythm of the cello.

But the cellist becomes weary of this cycle of pretence; she begins to take wicked pleasure in deviating from the habitual motif. The movement of the lover is perverted by staccato and chromatic phrases; she kicks off her heels, staggers across the cobbles and thrashes her fists against the wall. By completely surrendering her body to the music, Luther captivates the audience with a disturbing and invigorating performance. She becomes a ragged puppet to her emotions and insecurities, personified by Moody, the ominous puppeteer. This meticulously choreographed ensemble exposes the audience to the flaws that lurk beneath everyone’s skin.

Baz Productions have taken a surrealist play, with a distorted script and hyperbolic characterisation, and have created a strikingly accurate portrayal of human emotions. As it is an emotive and personal experience; each dreamer is inspired to form their own interpretation. Haunted by Strindberg’s lesson, that life is a ceaseless cycle of love and pain, will you discover the reason behind human suffering?

‘Dreamplay’ is showing at The Vaults Theatre until the 1 Oct. For tickets and more information click here: http://www.thevaults.london/dream-play