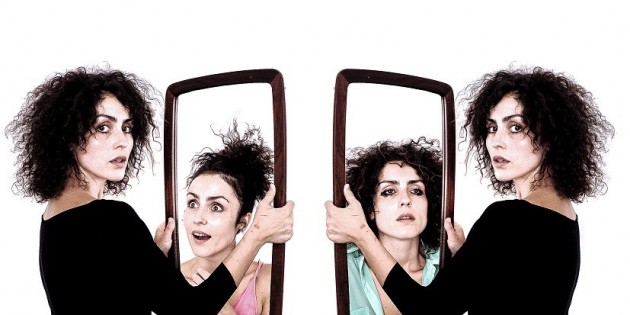 It takes a strong actress to deliver a one-woman show, and Siobhan McMillan nails it. Walking into the Camden People’s Theatre, dimly lit and decked out with a messy dressing table, feels a bit like trespassing into an intimate space – especially given that McMillan is already on stage, sat at the mirror, absorbed in the ritual of getting ready.

She goes on to deliver a vivacious explosion of energy, packing out the complexities of her heroine and delivering a satirical spin on a traditional fairytale. The dialogue is a striking blend of typical fairytale tropes interwoven with expletives and modernisms. She is a different kind of female lead, donning a Swarovski crystal-encrusted cloak and sipping candidly from a bottle of wine as she embarks on a pilgrimage to assassinate she who dares to be more beautiful than her. For the most part, she verbally constructs the props and settings, describing dip-dyed swans, and at one point delivers a bizarre and nauseating description of eating men – Sylvia Plath’s line ‘and I eat men like air’ springs to mind.

McMillan’s performance is comedic – she flirts and courts the audience, exhibiting an ironic awareness of her lack of cast that only adds to her polish. But in spite of the light-hearted, peppy femininity, there are insights into the gritty issues that modern women face. McMillan smashes her mirror early on, in what is perhaps a metaphor for the typical mould she is forced into by external patriarchal factors. The audience cackles along with her in her role as a 21st century witch, but as the delivery reaches a climax, we witness McMillan lost in a heavy fug of multiple pestering voices making comments on her appearance and character, all from personas that she creates herself. This ends with a plaintive cry: ‘why can’t everyone just leave me alone?’

McMillan is never at a disadvantage as the solo performer. She creatively projects her own shadow onto the wall in order to depict the monstrous form of one of her rivals. At one point, the audience become hay bales and chickens as she hides among the seats, and at another she flops down in exhaustion saying, ‘can someone else take over? I’m bored!!’ By far the most striking effect of the ‘one-woman show’ is how she juggles the many roles imposed upon women, mocking the idea that females are expected to put on an all-singing, all-dancing show. While female jealousy is playfully addressed, the serious undertones come to light at the climax of the performance. McMillan seamlessly leaps between humour and seriousness.

Mirrors is endlessly energetic, with faultless humour, but what begins as a light-hearted sketch also makes a very real point about the whims, influences and opinions that we carry around in our heads.

‘Mirrors’ is part of ‘Calm down, Dear’, Camden People Theatre’s festival of feminist theatre, and runs until Sunday the 11th October. Visit http://www.cptheatre.co.uk/festival/calm_down_dear_2015.php for more information.