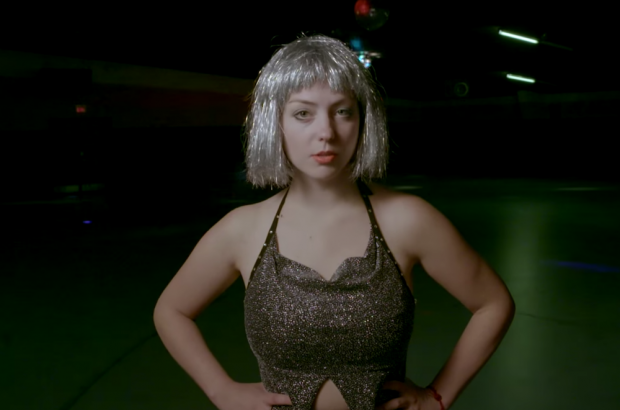 ‘Wow, you guys are quiet,’ says Angel Olsen, a couple of songs into her set. She gives the audience a quick smile, looks down at the floor as we chuckle nervously. And indeed, the atmosphere has been unusually hushed, still, spiritual. As a disco ball spins slowly and the stage is drowned in pink light, no one makes a sound. The infamous record store Rough Trade East has been transformed into Olsen’s own intimate stage for the evening.

Olsen is here to promote her latest release My Woman, which has been garnering praise from far and wide from the likes of Pitchfork to Florence Welch. It details what feels like a single love affair and its ending, as well as what Olsen describes as the ‘the complicated mess of being a woman.’ She begins with ‘Never Be Mine,’ euphoric and sad at the same time. Her piercing voice cuts straight through the room (and past the preamble): ‘Coming from an endless place/ Heaven hits me when I see your face/ I go blind, every time.’ Her lyrics, like her voice, are startlingly direct. Olsen doesn’t mince her words and her voice shakes with emotion and restrained energy. In the song itself, just as the verse reaches a romantic climax, she gives up, sighing and repeating ‘You’ll never be mine.’ Olsen expresses herself with searing honesty, but often backs off at the last minute: perhaps a comment on modern romance. The song feels like an idealised 50s or 60s rock and roll romance song, but during the chorus the romantic quality disappears and Olsen becomes more realistic–and this frustrates her. Both on the album, and at this live show, her songs feel like bombs about to explode.

However, as she weaves her way through her newest release (as well as older songs such as ‘Hi-Five’ and ‘Forgiven/Forgotten’) she is, paradoxically, at her most powerful when she holds herself back. As she sings ‘Heart Shaped Face,’ she drifts far away into her own past, taking the audience with her. ‘Was it me you were thinking of?/ All the time when you thought of me,’ she asks an absent lover, spoken pointedly as though he has been unfaithful. Olsen then takes the song in a different direction, continuing: ‘Or was it your mother?/ Or was it your shelter?/ Or was it another/ With a heart shaped face.’ Whilst the last few lines point again towards some sort of infidelity, the mentions of ‘mother’ and ‘shelter’ gesture at a broader dysfunction within the relationship. We don’t know exactly what Olsen means, but this is the very strength of how she writes: she is unafraid to leave certain questions unanswered.

The effect of this is mesmeric and Olsen is a master at controlling the crowd, at making us listen as well as making us dance. Numbers such as ‘Shut Up Kiss Me,’ ‘Not Gonna Kill You’ and ‘Give It Up’ are interspersed with the more introspective songs, lifting the energy when the set needs it most. At moments like these, the band is at their most impressive and dynamic. A particular highlight is the backing singer to Olsen’s left: the two harmonise with one another perfectly. But all eyes are on the woman herself: she is quietly charismatic, commanding the audience without begging for our attention. Olsen is a twenty-first century romantic, caught up in her own world and attracting a band of followers because of her sensitive self-absorption.

At times it almost seems Olsen resents the audience she is playing to, but she nonetheless remains aware of our presence. Towards the end of her set, she sings the fragile piano ballad ‘Pops.’ In the final section of the song, she cries: ’Take my heart and put it up on your sleeve / Tear it up so they can all sing along.’ Olsen is angry and she is bitter, and whilst writing provides her with an outlet, she also scoffs at those who view her heartbreak as merely a tune they can ‘sing along’ to. Does she mean it? Probably not. Her songs are littered with throwaway comments that seem to have been composed in the heat of the moment. But she is definitely comfortable with the degree of separation she has created.

The highlight of the show comes when she sings ‘Sister.’ This track encapsulates the entire essence of Olsen, as she sings of a lover ‘alive and gone at once,’ whose ‘blessing was a curse,’ and who learns to ‘fall together, fall apart’ simultaneously. She is an artist characterised by opposites and by contradiction. She and her band exist entirely in their own world. What makes her special is her ability to draw the audience into her vision. Olsen has a rare ability to make the introspective feel communal.