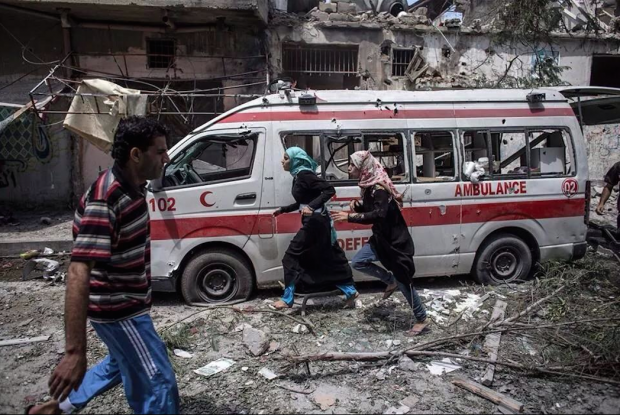 PINCHAS KAHTAN reviews ‘Ambulance’, a raw, first-person account of the Gaza war in the summer of 2014.

‘I was born in the first intifada, and raised in the second. My name is Mohammed, and I’m twenty three years old.’

To Mohamed Jabaly, character is not destiny. It is history. The man is determined by the tremors that shake him; the intifadas are named before he is.

The sober facts of newspaper headlines, reasoned arguments of opinion-editorials, and studied reflection of comment pieces create an illusion of order and control. Ambulance shatters this illusion, looking instead to the broken yet personal and human aspects. The first action sequence shows the destruction of the Nakhala family house. The title evinces a familiarity that evokes the tragedy of destruction far better than using numbers to portray victims as war logistics.

Jabaly, the film’s director and cameraman, is warned not to go outside — ‘they’ may attack again. He solemnly agrees, yet continues to sneak outside for investigation. The struggle between his responsibility to those around him, and the moral/artistic compulsion to convey and transmit human experience is one Jabaly talks about explicitly: ‘clinging to the camera made me feel safe’, Jabaly confides. It gives him a purpose, a lens through which suffering can be contained and ordered. Riding in an ambulance through Gaza, he films paramedics quietly completing their feats of humble heroism.

Leading these paramedics is Abu Marzouq, the driver. His incredible courage and laconic inscrutability makes him one of Jabalay’s most compelling subjects. ‘Abu Marzouq, tell me what you think?’, asks Jabaly after a bombing raid. With a stoical joke, Marzouq replies: ‘It’s generosity from God’. Yet when Jabaly persists, indifference quickly turns to anger: ‘Warplanes are attacking peoples’ houses. What do you think?’. Yet, as seen throughout the film, personal anger quickly subsides as God’s omnipotence is asserted and appealed to: ‘May God protect us’. When Jabaly reiterates his original question once more, the anger is subdued into an earnest declaration of reverence and faith: ‘Like I told you, it is the generosity of God—God made us resilient.’

Movement from the personal to the cosmic is characteristic of the film, ignoring the middle ground of party politics. Jabaly does not look to government or historians for answers or aetiologies. The who and the why matter less than what simply is: ‘Some people might say the war started for one particular reason; others may say it started for another reason. But no matter for what reason, it began. And what is more important, we woke up and found ourselves, closer to death, more than ever’. Structures of human knowledge and structures which govern humans are ineffectual compared to the cosmic, yet they are distant and abstract compared to the personal. Thus, the unseen enemies are usually unnamed: a ‘they’ who bombed and a ‘they’ who closed the border. Despite the fact that Israelis and Egyptians are being referenced here, apportioning blame is not Jabaly’s intent. Anger, though present, is eclipsed by grief and resilience.

Yet, human organisations such as the ambulance service exist for a reason: to mediate between different particularities when cosmic guidance is absent. If these organisations are ignored, the multiplex of human beliefs, desires and fears may succumb to a solipsistic tunnel vision: the inability to comprehend the person on the other side of the wall (or even the other side of the street) when their motivations diverge from one’s own.

Jabaly’s exchange with one man towards the end of the film demonstrates the problem. He has been evacuated from his home, and is now desperate to return to it, to see it for himself, to get a mattress and blankets so he does not have to sleep on the pavement. But permission has not been given for citizens to return; the Red Cross alone have access. The prioritisation of personal desires over the larger forces at play can endanger lives, be it of these refugees or of the paramedics helping them. But people can only perceive what they see; the needs and motivations of others are obscure. Warnings given by the Israeli army are received as ‘threats’, their perceived mendaciousness heightened by the fact that some of the warnings are never fulfilled. Threats are thus divided into ‘real’ or ‘fake’. They are perceived as either a device to toy with terrified people, or an exultant cawing of impending catastrophe: ‘This is not a warning. This is a disaster.’

The film does not dwell on this divide – to do so would undermine Jabaly’s optimistic depiction of humanity in Gaza. Ambulance is punctuated by moments where humanity transcends the personal: the existence of paramedics testify to the fact that people are able put others’ needs before their own, risking everything to help one another. Although the war has changed him, it has brought Jabaly ‘closer to reality’ through his ‘belief in the surviving people’. He has hope.

‘Ambulance’, supported by Bertha DocHouse at Curzon Bloomsbury, premiered on 26 August. You can find out more here.