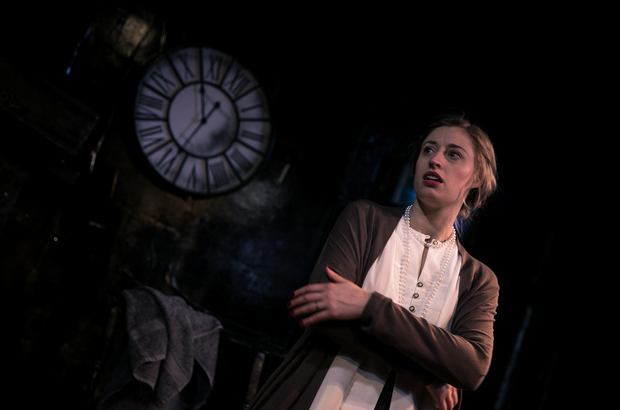 As well as writing plays for GCSE syllabuses, it turns out J.B. Priestley wrote novels too. Gove-era readers might struggle with this concept, and so Duncan Gates has adapted his 1926 novel, Benighted, into a play, bringing Priestley back onto the stage, just where he belongs.

And, hopefully, Priestley’s legacy will live on here for a long time. Gates’ adaptation, directed by Stephen Whitson and performed at the Old Red Lion Theatre, is a poignant attack on how our society hides its past traumas under the mask of decorum, and avoids the truth whenever possible.

Priestley traps some big-city types in a storm, and forces them to seek shelter in a house. Straight away, the men turn to drink, and one woman to prayer. The villain is an old soldier, locked away in the attic to deal with his trauma. Downstairs we are shown a valid indictment of the methods we use to cope with life–the truth is buried under all of this as we instead seek refuge in a life built on lofty, but unrealised ideals. Upstairs the veteran tries to overcome his demons, but it transpires that the real enemy is found in one’s self.

The play can feel a bit heavy-handed, at times telling us that we are all to blame–the ‘snag’ in society’s smooth functioning is apparently our own anxiety and fear of vulnerability. Nonetheless the piece is interestingly self-conscious, especially when it deals with religion: the praying woman is performed by a man, lending her character engagingly batty idiosyncrasies. This does temper a play that can seem preachy at times; at the same time it was a shame that some aspects had to devolve into slapstick, instead of smartening the script and keeping a more serious tone.

Nonetheless, Benighted is a clever play that fits well into a modern context. PTSD in soldiers has in the last few years gained notable media traction, and conversations are being had about ‘what the devil went on in ‘Nam/Iraq/Kosovo/etc/etc/etc/’. It’s interesting territory: PTSD occurs most frequently, research tells us, in societies that are unwilling to talk about their experiences. In a similar vein, the production questions our attitude towards truth and our own feelings.

Further as a counter-reaction to post-truth populist rhetoric, this play’s focus on hard realities packs a solid punch. Mostly, this comes through the sustained development of a tense atmosphere, helped by a stunning set and visual and sonic backdrops. Thunders left a shiver down my spine, and I was as startled as the characters. Director Stephen Whitson has a fantastic sense for generating an ominous tension, and a genuine aura of cautious desperation emanated throughout the production.

Benighted is certainly gripping and, though not without its own ‘snags’, offers convincing critique of the human tendency to conveniently fail to face up to harsh truths. I heartily recommend this to fans of fear, anxiety and depression – perhaps complementary to, though not a substitute for, all the group therapy sessions Priestley clearly thinks we ought all to be attending.

Benighted is on at the Old Red Lion Theatre until 7th January. For more information and tickets: http://www.oldredliontheatre.co.uk/benighted.html