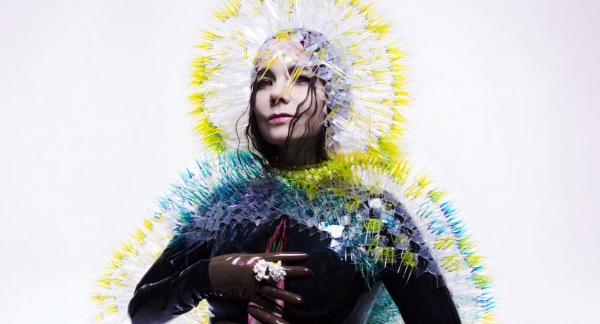 Björk, for a long time one of the only reasons people would visit Iceland in order to be cool (apart from maybe 101 Reykjavík), has released yet another LP. Vulnicura is an immeasurably better record than her prior release. Gone are the technological and educational pretentions present on Biophilia, they are instead replaced with an incredibly personal emotional investment and a fantastic approach to producing such emotion.

The production on Vulnicura struck me as striking a perfect balance between the musical styles that Björk has already explored as well as ones that are still left to be tapped. Simply gorgeous strings permeate the first half of the album and they seem to exist in perfect harmony with the minimalist production of Arca and The Haxan Cloak. Having listened to the album two weeks before its release – which itself was two months before its official release – I realized fairly quickly this was an album of unease, loss, and recuperation. Unsurprisingly, Vulnicura is an amalgam of vulnus and cura, meaning a cure for wounds. The lugubrious nature of the album is accompanied by some of the most arrestingly powerful and emotional singing from Björk since Vespertine. What makes the relationship between the two albums even more dishearteningly beautiful is the fact that Vespertine was released during the time Björk and Matthew Barney were getting to know each other, whereas Vulnicura was released following the end of their relationship. Vespertine was incredibly erotic and intimate, Vulnicura is similarly intimate, yet inherently depressing.

Björk explores her feelings before the two parted ways on the first third of the album. She delves deep into the sense of unease one might feel knowing that someone they have invested so much of themselves in might break away at any moment, wrenching away a part of them in the process. Her lyrics are incredibly straightforward yet are enveloped in a dense layer of emotional complexity. Lyrics such as “Once it was simple/one feeling/at a time” let you know that as much as part of herself will forever be with Matthew she understands things were much simpler at first, they always are. The eventual plunge into darkness is palpable once the lyrics on ‘History of Touches’ becomes apparent: “Every single fuck/we had together/is in a wondrous time lapse/with us here at this moment”. As much as breakups are often unexpected, they can also be sensed, and I’d argue that the latter hurts more than the former. Whether giving or receiving, the horrifying sense of anticipation and uncertainty can make one mad, and a way we cope is to encapsulate whatever it is that we had as two people and come to terms with it. Packaging every aspect of a relationship is often impossible, but understanding the experience and loving it for what it was often makes moving on manageable. This is what Björk explores on the first third of her album before descending into the unavoidable pit of self that we all scramble to avoid after losing someone we love.

The next three songs are breathtaking. They manage to convey feelings of confusion, anger, and bewilderment perfectly both in terms of their timbre and their lyricism. “Black Lake” sees an angered Björk that understands that building a life with someone often leads to no longer being “you” but being something else. Her devastation is apparent (“My soul, torn apart/my spirit, is broken/into the fabric of all, he is woven”), as is her anger about being so fragile now that part of her is gone (“Devotion bent me broken”). The song also finds her wrestling with the idea that Matthew no longer wishes to raise their daughter together – “Family was always our sacred mutual mission/which you abandoned”. The middle third of the album proceeds in such a fashion only to culminate in the incredibly aggressive ‘Notget’, where Björk viciously and triumphantly exclaims that she will not become the emotional fallout of someone else’s relationship, she will become what is best for herself and her children. It is here that the production by Arca becomes incredibly apparent. The Venezuelan producer has long been known for his unorthodox approach to electronic production. I find his particular brand of production unpalatable when present in his solo works, but something about the malleable and forceful voice of Björk makes his contribution to Vulnicura essential.

The final third of the album focuses on where to go from where she is now. She proclaims that she is not hurt on ‘Mouth Dance’ but the truth behind that is for her to know fully. Vulnicura is soul-crushing, abrasive, soothing, and above all: human. Despite the incredibly saddening nature of the album, Vulnicura fades out to a reassuring major key refrain. Björk has poured herself into Vulnicura, the least you can do is hear her story.

Vulnicura is out now on One Little Indian