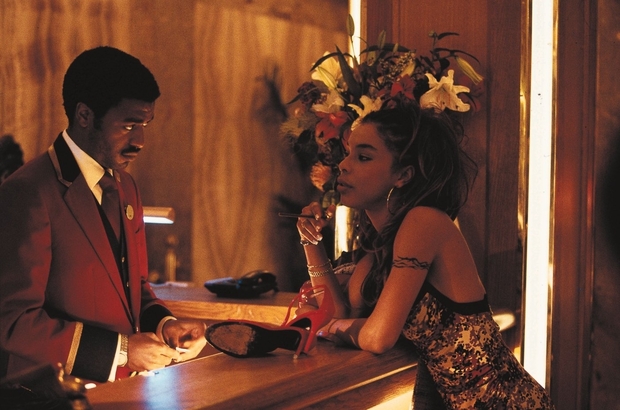 The mucky and the imperfect have no obvious place in the idealised, plot-focused world of mainstream cinema. Yet when dirt is directly addressed, films seem to move away from sterile formulae to create something closer to truth. Take the 80s classic Dirty Dancing (1987). The ‘dirt’ in the title refers to the rawness and passion that protagonist Baby is struck by when she sees the dancing that occurs in the staff quarters of Kellerman’s resort. The clean, cloying world of her upper middle class parents, obsessed with appearance and affectation, is a lie. The real essence of life can be found in the sweat, nudity and unutterable passion of dancing. This dirty world is admittedly darker and crueler, and faces the problems of abortion, abuse, and job insecurity. Yet when Johnny and Baby dance, heedless of everything in the closing sequence, those problems seem a necessary counterpart for real, honest love.

Similarly, in Frank Oz’s comedy Dirty Rotten Scoundrels (1989), dirt allows for the film to play with clichés of Michael Caine’s slimy, civilised Brit and Steve Martin’s brash, manic American. Dirt is once again a positive force; despite the wretchedness of these characters, we sympathise with them and their dim-witted victims, and love the fact that Glenne Headly’s Janet, the dirtiest scoundrel of all, turns the film’s misogynistic world on its head by conning the conmen throughout. The film is an exuberant celebration of rogues and ruffians – yet it shows a kind of sanitised dirt that never really represents life’s struggles. Despite being symbolic of atypical ideas and beliefs, the dirt of both Dirty Rotten Scoundrels and Dirty Dancing is in many ways scrubbed away by undeniably ‘Hollywood’ plot trajectories.

In Stephen Frears’ Dirty Pretty Things (2002), however, ‘dirt’ is the great, bustling stink that is dark underbelly of London. The film showcases the immigrants of all backgrounds who work behind the scenes as cab drivers, hotel night-watchmen, and hotel cleaners. In this underworld, ideas of morality are greyed and confused: world-weary prostitutes befriend Muslim virgins, and organ harvesting is not necessarily an unequivocal evil. What Dirty Pretty Things has in bucket-loads that the former two films lack is a brutal sense of realism, which ultimately means that the protagonists do not find conventional love. Yet this realism is not the same as pessimism: a warm, sympathetic script carried by future stars Chiwetel Ejiofor, Sophie Okonedo and Audrey Tatou tells a generous tale of love and friendship that could only ever emerge out of such a grim environment. The opening metaphor of a human heart blocking a toilet represents the perversity of the world, where even in the most hideous of circumstances beauty can be found – though that beauty will be unconventional to say the least.

Such realism is taken to an almost nihilistic extreme in Don Siegel’s Dirty Harry (1971). The film riffs off possible reasons for this grim policeman’s nickname: is it his methods? His outlook? The jobs he takes? Much, again, is morally grey: how different is Harry from Scorpio, the psychopathic serial killer he violently hunts? While Harry’s characterisation is fascinating, the true dirtiness of the film is found in the bleak world he inhabits. The whole film is cinematically dark in tone, saturated with blues, blacks and greys. Siegel’s determined realism presents views of a vast spectrum of characters: from Scorpio and the black gay man he tries to kill, to the weak, fat man attempting suicide.

Dirt in film works as shorthand for representing some kind of social ‘truth’. The bleak landscape of Dirty Harry belies the disillusionment at the on-going Vietnam War and a kind of post-sexual revolution blues: it anticipates Scorsese’s Taxi Driver (2006) in asking what America’s wealth and power really means if its world still looks so bleak. Using the word ‘dirt’ in a film’s title seems to be a statement of intent to avoid overly idealised, unchallenging scenarios. Dirty films stand out by opening doors and posing questions that romanticising, clean Hollywood does not usually ask – though in some cases they are subjugated to the demands of neat feel-good plots. Yet the dirt of Dirty Dancing and Dirty Rotten Scoundrels is not supposed to be the grime of real life; these films offer unashamed wish-fulfilment and escapism that is, of course, what much of cinema is all about. Dirty Pretty Things is, though, in my opinion the chief of this dirty bunch. It is striking for being both grittily real and hopeful. It presents a true vision of life, warts and all, where real people succeed against adversity in a way that cannot help but make the viewer feel good.