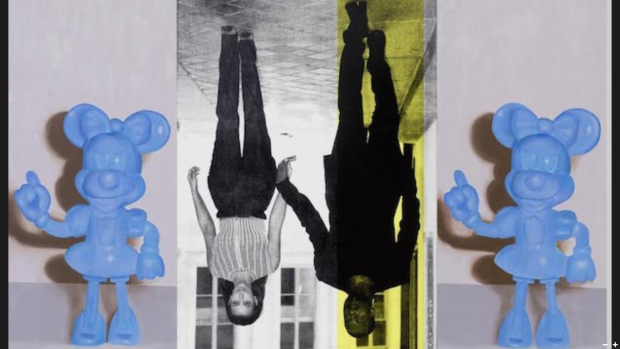 The Saatchi Gallery’s Champagne Life takes its title from the work of American artist Julia Wachtel. Wachtel’s screen print shows repeatedly inverted pop art photographs of ‘Kimye’ interspersed with images of a garishly blue plastic Minnie Mouse, begging the question: Is Wachtel’s Minnie scolding popular culture’s obsession with the likes of the Kardashians? Champagne Life itself comes from the Ne-Yo song: ‘Where trouble is a bubble in a champagne glass/ Dreams and reality are one and the same’. The name of the exhibition is perhaps a nod to the fact that women in the art world don’t always have trouble-free, bubbly success stories. However, the integrity of that message is somewhat compromised by champagne manufacturer Pommery’s sponsorship of the exhibition. Even more dubious is the fact that the show’s name was actually changed from A Woman’s Hand as soon as the sponsorship deal went through.

In fact, Champagne Life is a rather patronising and smug celebration of female artists. The exhibition is the first all-female show in the gallery’s history. The exhibition shows the work of fourteen artists, all of whom display work that is perfectly pleasing in its own right, but the exhibition betrays a distinct lack of thematic cohesion. The only factor unifying the pieces on show seems to be the gender of the artists. The ongoing inequality faced by women in the art world certainly makes gender a worthy focus for Saatchi’s exhibition; the highest price paid at auction for a work by a living female artist is $7.1m for a Yayoi Kusama painting, which hardly compares to a $58.4m sculpture by male artist Jeff Koons. Despite being presented with this perfect opportunity to act as a platform for discussing this inequality, the exhibition features no discourse on gender at all. Its lack of thematic coherence throws up the question of whether Champagne Life celebrates or limits the artists it supposes itself to be championing. Showing these works together simply because they have been made by female artists seems more like an act of condescension than a comment on gender inequality.

Nonetheless, despite the curatorial failings of the exhibition, its contents are enjoyable. Saudi Arabian Maha Malluh’s Al-Muallaqat is visually impressive; 233 burnt pots are arranged along one gallery wall. This installation links the pre-Islamic tradition of Hanging Poems in Mecca with the modern impact of globalization on Saudi Arabia. Stephanie Quayle’s clay sculptures conceptually investigate the relationship between man, beast and the natural world. Her roughly-textured pieces Lion Man and Two Cows captivate the viewer with the demanding presence of their life-size scale. Another highlight of the exhibition is Jelena Bulajic’s giant and painstakingly accurate portraits. These demand a long and focused viewing: every hair and every fold of skin of Bukajic’s subjects are so minutely depicted that upon a closer inspection they cease to resemble recognisable facial features. Some of the pieces are more underwhelming, such as Suzanne McClelland’s canvases which depict scrawled words or numbers relating to terrorists and body builders. Rather like the variety of artists in the exhibition as a whole, we are not given an explanation for the grouping of these statistics.

Stephanie Quayle, one of the exhibition’s contributing artists has suggested that the exhibition’s lack of thematic uniformity is intended to show that gender ought not to play a role in artists’ success. She has said that it’s less about being a female artist and more about simply being an artist in today’s more ‘genderless society’. But surely this means that there should be a reason other than gender for grouping these artists together? An international celebration of female artists is a venture which is easy to support, but the theme-less nature of this exhibition does more to reduce the artists to their gender than to liberate them from its evident limitations in the art world. Surely grouping women together in this manner simply perpetuates a separation of female identity from the male? Without intending to condemn the gallery’s feminist efforts, I’d venture to suggest that a more even representation of the sexes in future exhibitions might be a better way for Mr Saatchi to show his support for gender equality.

‘Champagne Life’ is open to the public until the 9th of March 2016.