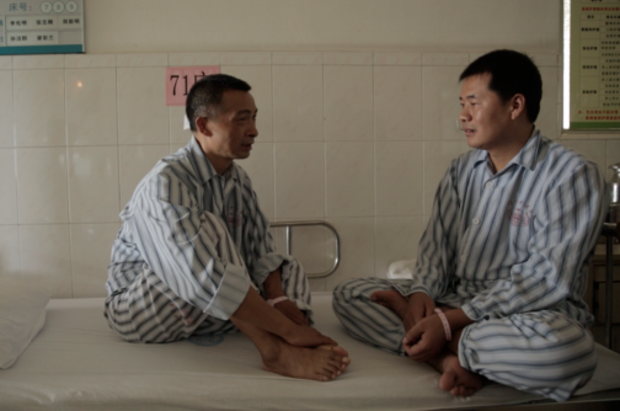 A broad river lies still, shrouded in a grey-green fog. An elderly lady, stooped, carries kindling to a stove. An open casket holding a young man, heralded by gongs and fireworks, is carried to be buried. But something is not right in the tragic yet peaceful rural scene that opens Complicit (2017). 26 year old Yi Long, we are told, was a worker for a company called Foxconn – an incongruous, corporate word that jars with this scene of a traditional Taoist funeral, a ritual that has remained unchanged in form for countless years.

Foxconn is Apple’s main manufacturer in China, subcontracted to build the iPhones and iPads that the company designs in California. Yi died after developing leukaemia from long-term contact with the chemical benzene – working in a factory that could well have produced the device on which you are reading this article.

Yi was just one of the thousands of China’s 260 million migrant workers who suffer occupational diseases as a result of work in consumer electronics factories. These are people who leave their impoverished rural homes to seek their fortune in the big city – but find themselves alone in Chinese industrial heartlands, living in single rooms in bare concrete tower blocks, eventually stricken by debilitating illnesses. These are people like teenager Xiao Ya, who ‘did not know cities existed’ before coming to work in Guangzhou, but is left barely able to walk by the toxic chemical cleaning agent n-hexane, and forced to spend three years in hospital.

Another worker, Ming Kunpeng, is plagued by depression, which is triggered by dark thoughts that he has brought shame upon his family after being diagnosed with benzene-induced leukaemia at the age of 26. Just weeks after being interviewed for Complicit, he would commit suicide by jumping off the hospital roof.

Filmmakers Heather White and Lynn Zhang interweave such case studies to lay bare the plight of the individual fighting against the depersonalised corporate system. We are constantly reminded, through shots of the anonymous crowds and glittering skyscrapers of Guangzhou, that these people originating from closely-knit rural communities are now isolated and alone. They have no companions, no unions – and no rights.

Complicit raises questions about the nature of economic and social progress in China, the forms of investment it encourages and the issues faced by the Chinese workforce. Official figures state that there is one chemical poisoning in Chinese factories every five hours. The culprit tends to be benzene – used for its cheapness, but banned in the West for the last four decades. On top of this, factory conditions are unimaginably poor. Complicit shows employees working fifteen hour shifts, with the average worker among Foxconn’s one million employees carrying out just one repeated basic task 5,000 times a day.

The film exhibits the ultimate irony of the Chinese communist system: the common man suffering, albeit behind visions of unreal national assemblies, modernisation and economic growth. This is the image those in the West see when they accuse China of stealing their industry and jobs. Companies like Foxconn are able to rebut human rights accusations by claiming any criticism of their working conditions is in fact nothing more than a veiled dig at the success of themselves, Apple, and the ‘made in China’ brand. Political and corporate machinations abound, while Yi Long, Xiao Ya and Ming Kunpeng suffer out of sight.

As a piece of cinema Complicit soon drags: it effectively shows the same situation several times through the scope of various different workers. This film should not, however, be viewed as a piece of entertainment. Rather, it is a documentary in the truest sense of the word – a film whose purpose is to document and publicise situations that the viewer is all too rarely exposed to.

The difficult truth is that the cruelty that Chinese workers face can be traced directly back to us in the West — something White and Zhang emphasise throughout Complicit. Our ever-growing desire for electronic devices is what has led to such long hours and intense working conditions, while shareholders’ desires to maximise profits has compelled companies to resort to the use of cheap chemical agents in factories. The idea that the West upholds superior workers’ rights to regimes like China is proven to be flawed: we are simply outsourcing the cruel, Victorian-style working conditions we like to think we outlawed decades ago.

This is a serious, consumerism-fuelled problem that holds no easy solution. Apple moved towards addressing the use of benzene and n-hexane in its factories back in 2014, but very little has changed since then. People are still suffering, and something needs to be done. So long as they suffer, we are all Complicit.

‘Complicit’ was part of the Human Rights Watch film festival 2017, more information can be found here.