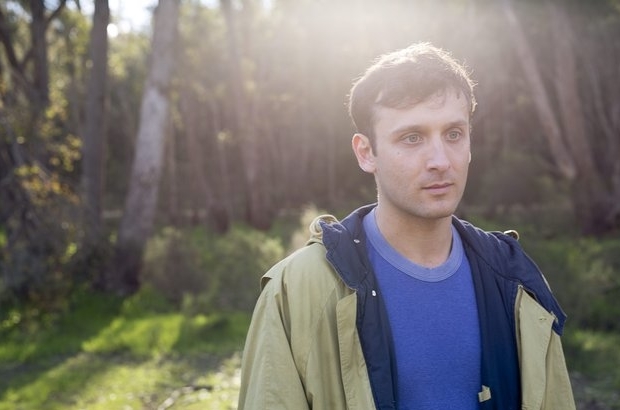 I have arrived at Omeara without a single expectation. I have never heard of D.D Dumbo (real name Oliver Perry), and as I stand waiting, leaning against the venue’s exposed brick wall, I watch doubtfully as Perry and his band set up wind chimes, a guitar, clarinet, saxophone, bongos, drum set, a trumpet, and an eclectic host of more unfamiliar instruments from around the world. More than anything, I wonder how the musicians will find the room to perform on what is already a small, compact stage. Everything about the Omeara feels compact. Soon, I will find that everything about the night is compact, the narrow room teeming with a complex dynamism. More on that later.

Perry’s brazen, manic style tends to circle the point he’s really after, as if he cannot or will not say what he actually means, in fear of what demons these confessions might unleash. Midway through his set, Perry stops to tune his guitar and speaks quickly into the microphone. Seeing our blank faces, he then asks, ‘Did anyone understand that? Sorry, I’m mumbling…I’m Australian.’ It’s probably the best way to describe Perry. He sings with mumbled intimacy, his words blurring just as the songs do themselves, though each utterly unique, pass into one another in an indescribable haze. The audience is left with the feeling that the lyrics themselves are unstable, equally capable of slipping into the misty melodies.

And yet, Perry’s music is dependent upon contrasts. Perry breaks from his musical fog to capture startling high notes – he stands on his toes, body stretching upwards, head craning to the ceiling, large eyes glued open in alarm. It’s at moments such as these that his music seems the most alive and uplifting, free from ‘the zombie mountain, where the dead die’, of which he sings.

Of course, Perry’s interest in opposites also makes these moments some of the most disturbing in the night. In the skin-crawling ‘King Franco Picasso,’ the low, menacing lyrics build quickly into the belted, high-pitched cry, ‘it still pains me to see him bathing in my brother’s blood.’ Even as the echoes of ‘blood’ rattle through the venue, the crowd can’t help but dance and sway, caught in the swell of something both cathartic and uneasy. The song interrupts itself with bouncy synth chords, and just a moment later, a band member (‘the Octopus’, as Perry calls him) gives a sinister laugh into the microphone. I smile, and other people in the crowd laugh. ‘King Franco Picasso’ typifies the labyrinthine and continuously shifting music of D.D Dumbo. Though otherworldly, it is also utterly of and for this world, reaching for transcendence but rooting itself in darkness.

The blatant environmental, humanitarian, and moral anxieties that run through Perry’s lyrics are juxtaposed against his evident joy in making music. The four musicians on stage never cease moving, seamlessly jumping between instruments,  usually playing two or three simultaneously— in other words, organised chaos. From a saxophone-clarinet duel with a band member to playing the chimes with the bell of his trumpet, D.D Dumbo’s sound is full of an energy that is both frenetic and considered. At the end of the night, a disappointed crowd is denied an encore. Given the unrelenting entertainment being offered up until that point, the disappointment is understandable.

In the end, the lyrics to ‘Toxic City’ best capture the tone of the night:

And the song does go on. The music of D.D Dumbo stays with you, walking home on the warm, August night, Perry’s mumbling voice seems to resound close in the city’s desperate continuum.