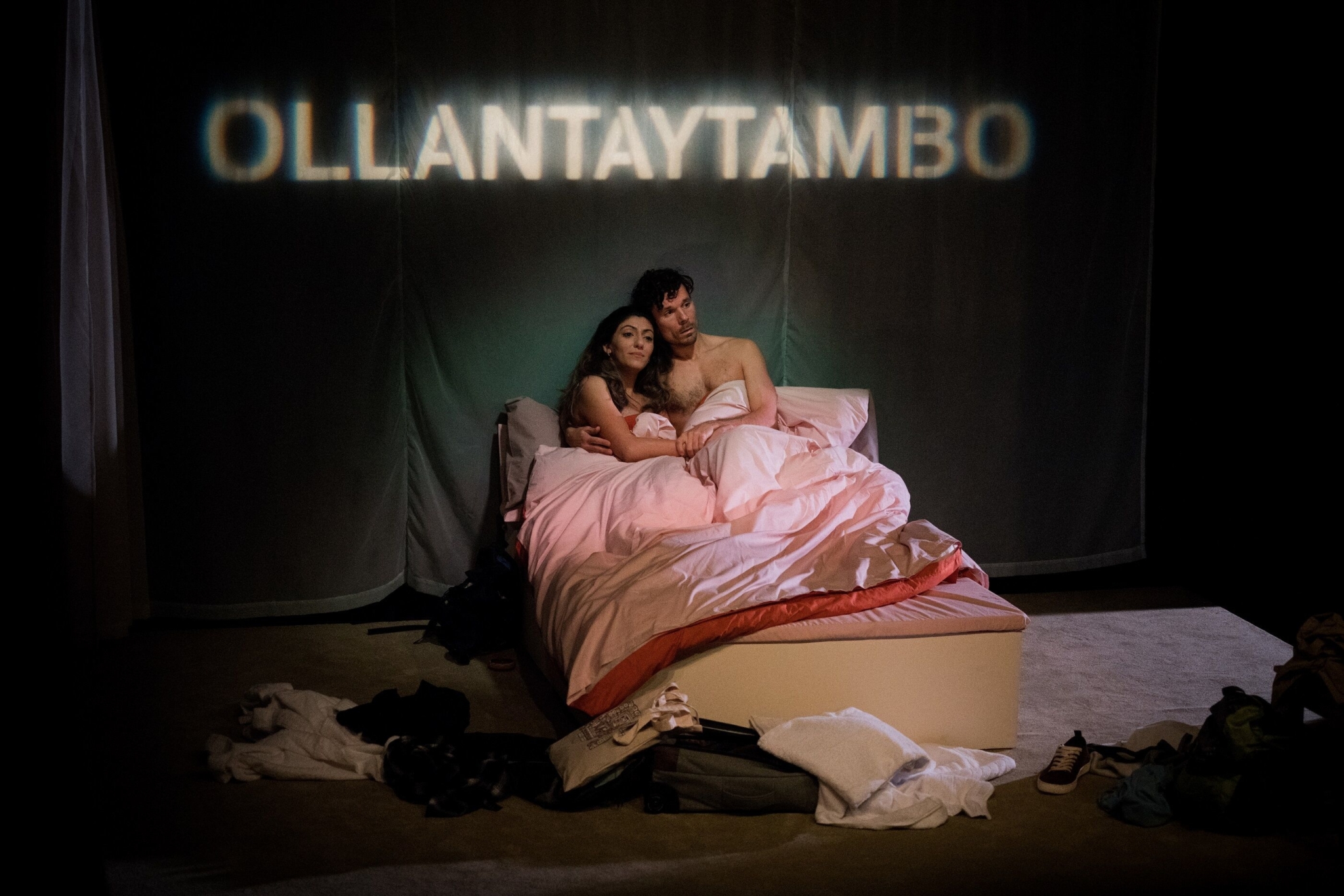 Cuzco is a city renowned for its beautiful scenery and historic richness. Situated along the Peruvian Andes, it was once the capital of the Inca Empire before it was conquered by the Spaniards in the 16th century. Today, despite its poverty rate of 28.2%, Cuzco is one of the main tourist attractions in Peru and receives 1.5 million tourists a year. Two such tourists are She and He, a Spanish couple embarking on a last-ditch attempt to revitalise the carrion that is their relationship. However, as Cuzco unfolds it becomes clear that we are witnessing their final protracted moments together. Written by Víctor Sánchez Rodríguez and translated fluidly from the original Spanish by William Gregory, it is rare to see non-anglophone productions retain their cultural specificity.

The play opens to a fight. She is reluctant to leave the hotel room, fatigued by altitude sickness, a deep fear of Peru’s tropic environment and a crippling guilt over centuries of Spanish colonialism. He, on the other hand, is thriving in the Peruvian sun, inhaling the culture with his new friends; a light-hearted American couple. The play unfolds over the course of their travels. From city to city, despite the wealth of cultural richness outside, we are privy only to the interior of their various Peruvian hotel rooms: the suitcase on the floor, the bed at the centre of the stage.

In each city, in each room, we bear witness to a similar series of events: She stays home all day, citing an agoraphobic fear of the outside while He goes out with his new friends, experiencing the wonders of an historic city in the way that only a middle-class tourist can, thermal baths and all. The action of the play unfolds in the moments when He returns and they fight. Dilek Rose, as She, reinterprets the trope of female hysteria in a performance that pays homage to characters such as Catherine in Tennessee William’s Suddenly, Last Summer. The mastery of Rose’s performance lies in the subtle indications of her deep melancholy, without which, it would have been difficult to differentiate her depression from something more obscure. The walls of the hotel room serve to materialise two forms of symbolic entrapment: her depressive feelings of hopelessness and her suffocation brought on by her cadaverous relationship, the former serving to exemplify the latter and vice versa.

However, as the play unfolds, She begins to leave the room more and more, alone. We do not see this but are told about it in the room. In fact, throughout the entirety of the play, we only become aware of the couple’s antics as they report them to each other. In this way, their dialogue, which constitutes the substance of the play, is mostly performative: selectively revealed in order to incite a desired response in each other. This is particularly evident midway through the play, after the two have sex. He wants to know why She is finally in the mood again, after so long. What begins as a harmless curiosity turns into a taut psychological game as both She and He begin to allude to sexual encounters and fantasies they may or may not have had. Think Nicole Kidman and Tom Cruise in Stanley Kubrick’s Eyes Wide Shut. It is unclear whether either character has actually committed infidelity. In this breakdown of communication, each character becomes a gendered caricature of themselves, She is the accusatory, fast-breathing disapproving woman and He, the callous and inconsiderate man.

The play reaches its conclusion when He comes back to the room to find an indigenous Peruvian boy bathing in their tub. He is horrified by his partner’s mental state, as She is in an anxious frenzy. This is the part of the play that I imagine lost most people. Her behaviour, once understandable is now confusing and erratic. A tangential theme running throughout the play is the legacy of Spanish colonialism, the effects of which are particularly apparent in Peru, where the local population is extremely poor. Presumably, the crushing weight of her guilt results in her desire to literally bathe and clean the local population. The characters fight, He says ‘there is a lagoon of shit inside you… a lagoon worse than centuries of Spanish colonialism.’ It is in this sincere moment of hyperbole that I remember the privilege and ignorance of these characters. Even She, who appears so deeply affected by the horrors of Spanish colonialism, doesn’t seem to be particularly interested in mechanisms to enact lasting change. In fact, her sudden onslaught of colonial guilt seems to be a product of her depression more than anything else. The indigenous Peruvian subaltern does not speak in Cuzco but is somewhat exploited as an invisible prop.

By and large, stripped of its setting and symbolism, Cuzco offers a touching and dynamic portrait of a couple who have grown irreversibly apart, and who are growing apart still, until they reach a point where they are unable to recognise each other. Their characterisation is somewhat riddled by the repulsive tropes of who we become in the last stages of a relationship. That being said, it is not an inaccurate representation, just a nasty one to confront.