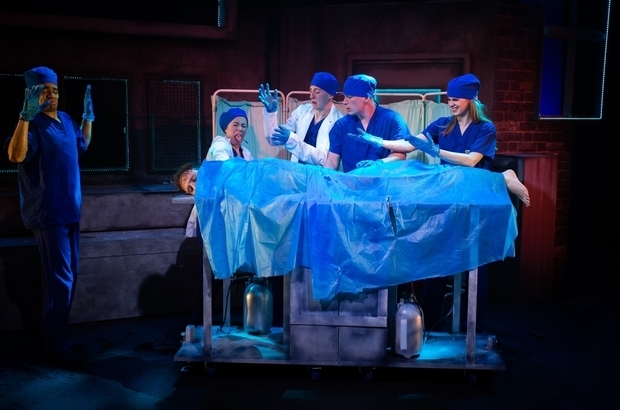 Performed at Lilian Baylis Studio, Alfred Taylor-Gaunt’s camp extravaganza Derrière on a G String lives up to the ‘very fun, quite silly, and rather naughty’ dance show it is billed to be. Comprising of a series of fast paced sketches that depict the trials of modern day life, framed against a background of classical music, the work effectively brings dance into the modern world, for a new generation. From the panicked state you end up in after realising that you cannot find your plane ticket at the airport, to the exaggerated dance that you try to suppress when in desperate need of the toilet. Derriere on a G String explores mundane aspects of everyday life in a comedic and relatable way.

With similarly expressive body language and use of music that exaggerates movement in the style of Charlie Chaplin, well known works from famous ballets and operas are completely reimagined. The concept of the show is an interesting crossover from traditional ballet narratives into the modern day trials of millennial life. There is a strong focus on the comedy and storyline of the sketches, meaning the dance isn’t always at the forefront. It is intentionally carried out in a somewhat satirical manner in some of the sketches which is unusual to see, but fits with the theme of the show. This does, however, mean that it doesn’t leave the same impression of awe that a more traditional and technical dance show might.

The sketches that work best are the ones that aren’t too overdone or elaborate, but about a simple, mundane aspect of modern day life. One that particularly stands out is a chorus of millennial youths in black hoodies vaping in canon as they dance around the stage with the choreography echoing that of a traditional ballet crossed with Harry Potter. Their clothes and dancing bringing to mind a satire of the black swan in swan lake. The miming and physicality is fantastic throughout the performance, and is very well observed, particularly in this sketch. The set and lighting is highly versatile, if fairly minimal at times, which allows for the focus to be completely on the dancers’ body language and facial expressions when they carry the narrative, which is very effective. The set is often created by the dancers’ body language, and repeated gesture. This is best in a very comedic sketch about transport, where a bus is made of the dancers’ bodies. The lighting comprises lightboxes and frames, allowing for subtle differences to set the scene for each new sketch. It makes effective green pharmacy crosses for a gory comment on the state of the NHS, for example.

A highlight is the beautiful and very moving pas de deux between two male builders which is a nice modernisation of a traditional balletic pas de deux, and one of the highlights of the choreography. The delightful caricature of heterosexual masculinity is flipped on its head with the balletic tale of blossoming romance between them. This radical retelling is also employed in the acutely observed football sketch that opens the notably funnier second half. Dancers drop to the floor in faux agony at a ball skimming past their finger, and by the end of the section two of them are throwing a bouquet after their marriage. This charming addition of queerness to traditionally heterosexual narratives serves to be both hilarious, and quietly radical.

Unfortunately, there are a few notable missed opportunities in a couple of the sketches, that could have bought them into the millennial realm of the show more effectively. There were a couple that came across as insensitive and a little offensive. For example, there is an incident of fatphobia when two robbers in fatsuits get distracted from the mission at hand by fighting over a massive chocolate bar. This is unnecessary, and could have easily been avoided.

Overall it is a very enjoyable, amusing performance that provokes the question of whether dance needs to be modernised or not. Working around the central aspect of comedy definitely makes it more appealing and relatable to a younger audience. It also makes comedy more accessible and universal through using movement and mime and no words. It is a good cross over between the two genres of dance and comedy, and some of the sketches in particular are very amusing and clever, and very worth a watch.