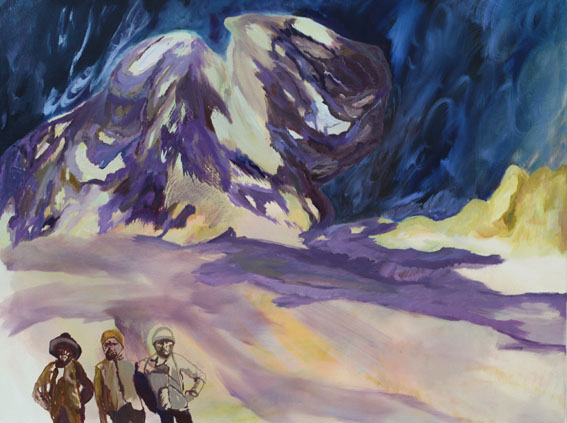 I was introduced to Elysia Byrd’s work through her piece Riding Yak at the FBA Futures Exhibition at The Mall Galleries in January. Elysia is a graduate from Wimbledon College of Arts. For me, her work stood out.

COULD YOU DESCRIBE WHAT YOUR ARTWORK IS ABOUT?

ELYSIA: My work investigates ideas of tourism and exploration. I look at pre-conceived ideas of escaping somewhere, compared to how we actually experience it when we get there; places that ‘you must visit’ in order to have had the right experience by Western standards when you return home.

More recently I have become interested in ideas of exploration through reading Shackleton and Joyce’s accounts of their expeditions in Antarctica. It is hard to imagine what it must be like to be the pioneer that sees a place for the very first time, before anyone else, because a decision to visit somewhere is usually based on what we’ve heard about it before.

I’m investigating this idea that the traveller tries to be like the explorer, seeking new knowledge and self-worth, returning with trophies and stories. This leads onto the idea of collecting, which is the second vein of through that runs through my practice. I’m interested in what we choose to collect and why. The explorers brought back trophies of skinned, stuffed and pickled animals and plants that they found in Antarctica. They also took photographs, in which they look like today’s hipsters; I like that idea, too, of the interchangeability of time and place, that an image can function as many different places and times at once.

Today’s tourists return from holidays armed with trophies, souvenirs and photographs, yet much of the time originality is rare. We have heard the stories before: beginning with the explorers.

HOW DID YOU BECOME INTERESTED IN EXOTIC SCENES AND TRANSIENCE?

ELYSIA: I was lucky growing up as we travelled a lot and we weren’t sit-by-the-pool type of people. So, I think I was exposed to the idea of there being cultures other than my own from a very young age, and the desire to understand and experience those cultures have stayed.

However, I believe experiencing other cultures can be quite a selfish idea, and through my work I’m trying to question how we approach these experiences without just simply taking. I think it is necessary to acknowledge that our idea of the exotic is not always true and to try and learn from our experiences of otherness.

The idea of being transient is something that’s at the forefront of contemporary culture: we’re constantly on the move. I wanted to explore the idea of ‘the hotel’ because I see it as a place where people go to escape from normality and I am interested in this kind of pseudo-ownership that happens when you temporarily own a space that many others have owned before you, and that many others will own after you.

This also links back to the idea of collecting things to just show that you have been somewhere; there is an argument that says that in our buying of souvenirs and taking photographs of a place we are attempting to own some part of it. I suppose ultimately it’s about escapism – that’s what painting is for me, escaping from my current place.

YOU WERE SELECTED FOR THE FBA FUTURES EXHIBITION, WHAT DO YOU THINK ABOUT THE PROCESS OF ART SELECTION AND HAVING ‘WINNERS’ IN SUCH A SUBJECTIVE FIELD?

ELYSIA: Good question – I think the answer is so multi-layered. I think no matter what profession you’re in there is contention between competition and subjectivity: even if you fulfil specific criteria, there is someone at the other end using their ‘worldly experience’ to make a judgement on you, the less worldly. The idea of having a winner is a funny thing because, in art, it can never say ‘this is the best person in the show’; however, that is what makes artistic or cultural discussion so interesting.

It’s good when there’s a space around the show to talk and discuss, because it allows other elements of the work that surround the artworks themselves to have a say. The Turner Prize has a winner – obviously everybody is going to have their own winner in mind, but the chosen winner is the art, not the artist.

I think art selection gives recognition to the fact that the arts are crucial to our society and that talent is worth recognising. I suppose the stigma surrounding it is when one artist is so publically set aside from everyone else, to celebrity status, people always ask – why? Ultimately they can see it as unfair and hierarchical, but the art world intrinsically has these hierarchies contained within it, regardless of people trying to ignore or fight them.

Art doesn’t lead to a ‘yes or no’ answer, but there is taste. Everybody has his or her own taste and therefore we are never going to agree; but that’s what makes the artistic world so interesting.

WHAT’S NEXT FOR YOU?

ELYSIA: I’m working on a new series of work at the moment, just trying to make a lot of paintings and let them form organically. I’ve been applying for a couple of residencies in South America, one in Colombia and one in Brazil for this summer. If neither of those works out I’ll probably go and volunteer in Colombia for a month or so as I really just want to do something that breaks up my daily routine.

Fumarole: A fumarole is a mound of ice that forms about a volcanic crater in very cold conditions. When members of Shackleton’s expedition (1904-1907) climbed Mount Erebus in Antarctica they found fumaroles that had formed amazing shapes – that looked like a lion’s head and a beehive amongst other things. I didn’t want to paint the snow white. I wanted us to believe that the snow could be purple and yellow – that we didn’t have to see snow as white.

Inner Dell: This painting started out as a painting of ornaments collected in a house I was working in. Then the orange started to look sort of like a waterfall and I thought – what if this pipe wasn’t in someone’s house, but had taken on a story of it being whittled in a dell. It sounds strange, but it worked in my mind, taking an object out of the context in which you found it and putting it somewhere else.

To take a look at more of Elysia’s work visit her website http://www.elysiabyrd.co.uk/