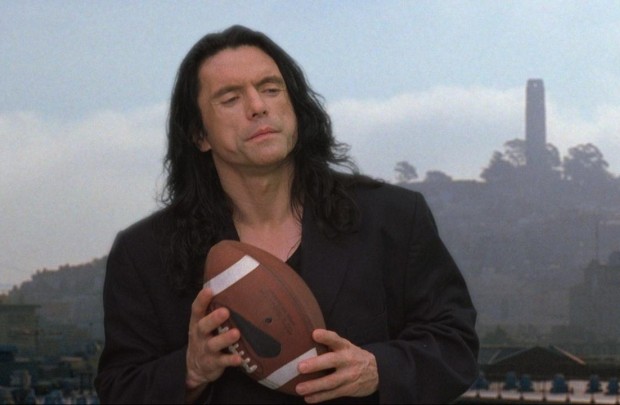 I came back from the cinema last night with a voice hoarse from shouting, several ribs aching from laughing, and a bag full of plastic spoons. This, as you may have gathered, was not an ordinary trip to the cinema: this was a screening of The Room.

You have probably heard of this film, which has paradoxically earned itself the title of both ‘best’ and ‘worst’ film ever made. To get a real sense of this film’s duality it’s important to know that it was originally intended to be a serious drama but was rebranded as a ‘dark comedy’ due to the reactions of its first audiences. The Room is just what you might expect from a film written, directed, produced and starring the same man, as the hero of the story: Tommy Wiseau.

Wiseau plays Johnny, a general all-round great guy, whose relationship with Lisa (Juliette Daniel) is threatened when she has an affair with Mark (Greg Sestero) behind Johnny’s back. Oh and Mark is Johnny’s best friend. That’s mentioned in the film. Quite a few times.

Other characters include Denny (Philip Haldiman), the teenage neighbour taken under Johnny’s wing – demonstrating just what a great guy Johnny is – and Lisa’s mother (Carolyn Minnott) who thinks her daughter is incapable of providing for herself. There’s also a guy called Peter who randomly appears in two scenes without being introduced and then abruptly disappears from the film altogether.

From the abysmally constructed characters, and the unashamed idealisation of Johnny, my friends and I have concluded that Tommy Wiseau based this fantasy on some personal experience of a bad relationship. It’s either that or he has never been in a relationship at all – it’s quite hard to tell.

The humour of this film is derived from the painfully underdeveloped characters and plot, as well as the baffling script, host to some real gems such as ‘leave your stupid comments in your pocket!’. Plot points are picked up and dropped: one character, for example, nonchalantly announces that she has breast cancer and it is never mentioned again for the rest of the film’s duration. This is not a film that has woven its twists and turns into the plot; rather, it’s a film of awkward inconsistencies and completely unrealistic consequences.

As a friend and fellow spectator remarked: “This film doesn’t need a pregnancy scandal to make it interesting, but it has one anyway!”

All of which serve to make it a bit brilliant. Screenings of the film have become a cult phenomenon. Before the film begins at the Prince Charles Cinema, there is a subtitled introduction imploring viewers to quote along loudly, make sure their heckles are funny, and to refrain from throwing American footballs at the screen.

Having never been to one of these screenings before, I was surprised but delighted by the rowdiness of the audience, if just a little bit frightened by the aggressive shower of spoons that erupted at seemingly random intervals. You do pick up the rules along the way, and having seen the film before I was able to join in with the loud quoting, but here are some to give you an idea of the atmosphere of the screening:

1. Whenever you see a spoon on screen – throw your spoons. (These screenings are strictly BYOS, or bring your own spoons)

2. Loudly greet a character every time they enter the scene with the formulaic phrase: ‘Oh hi, [character name]’.

3. Whenever a door is left open on screen, don’t hesitate to tell them to shut it.

If all this isn’t enough to convince you to watch The Room (I too had my initial doubts), then perhaps the fact that James Franco is starring as Tommy Wiseau in an upcoming film about the making of The Room is. I hope that, as a result of Franco’s film, The Room will absolutely rocket into the recognition and the critical acclaim it so desperately deserves.