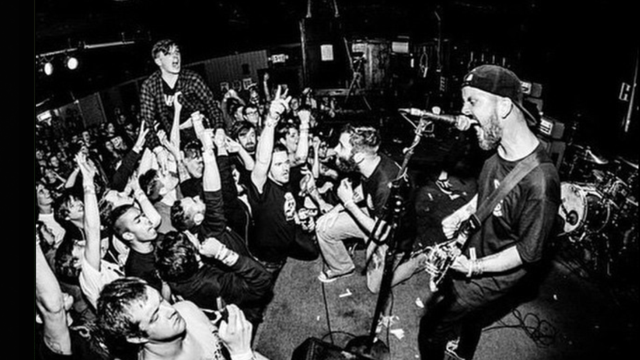 JAMES PATRICK CASEY sees Gnarwolves at the Camden Underworld, and would like to comment on their performance but was probably brain-damaged a little bit in their ridiculously fun moshpits.

British rockers Gnarwolves are the precise reason I’m not a fan of assigning genres to bands; they’ve been called everything from hardcore to skate punk, but when you’re at one of their shows, it doesn’t really matter. This is an aggressive, intense band, whose fanatical crowd were the most mosh-ready of the four groups I’ve seen live this month; the venue wasn’t great and I hardly know their songs, but it was the most mindless, limb-flailing fun I’ve had in ages.

The evening didn’t get off to a great start, with my friend forgetting to buy a ticket two months ago, me being unable to find a touter to get him one on the door, and my other friend not showing up until about seven seconds before Gnarwolves themselves got on stage; the Underworld is also a slightly annoying venue, with a floor filled with three concrete pillars that’s about as large as my kitchen, and equally unsuitable for a gig. Then the opening acts were inconsistent, with metalcore group Public Domain preparing me for an intense evening, only to be followed by the slower, more melodic Prawn who, despite adoration from the rest of the crowd, slowed down the evening, killing the momentum before Gnarwolves appeared.

But when they did the crowd exploded, immediately crushing into the front of the stage to get up next to the band and stage-dive back into the mass of limbs below them, while others were crowd-surfed onto the stage from behind, creating an endless conveyor belt of angsty young people falling through the air in front of the ‘no stage-diving sign’ and a row of black-hoodied security staff with their heads in their hands.

And while I’m not really a fan of this kind of moshing – I prefer defined pits where you can thrash into individual people, rather than be pushed around as a drop in a sweaty, obscenity-shouting ocean – and I didn’t know the band well enough to sing along to choruses, or get excited when the intros to ‘Smoking Kills’ and ‘Boneyard’ were played, it didn’t matter. Unlike all the other gigs I’ve seen, this one was more about the crowd, with enjoyment coming from thrashing around with them. Honestly, they could have put a cat on stage, rubbed a cheese grater down its back and let its anguished screams blast through the speakers, and I’d probably have enjoyed the moshing just as much.

More than some of the other gigs I’ve seen, this made me feel like part of something; something full of unintelligible vocals, alcohol, and moshpits in which I accidentally groped five people, but something communal and fun nonetheless – Gnarwolves are right, “we make a toast of being lonely, because it’s better than drinking alone”.