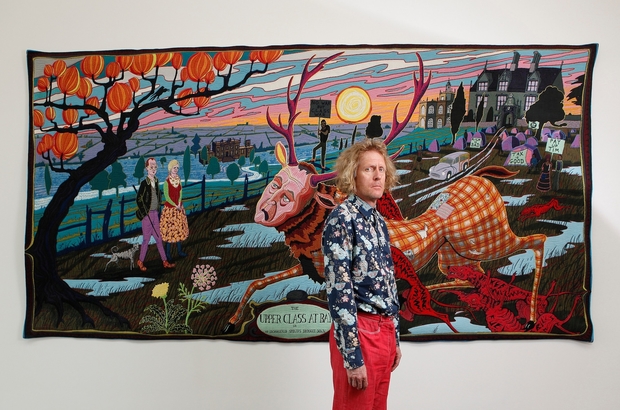 I started 2020 full of anticipation for numerous exhibitions showing across London. From Yayoi Kusama’s Infinity Mirror Rooms at the Tate Modern, to Artemisia at the National Gallery, my artistic taste buds were tingling. However, with many art galleries and institutions having had to justifiably close due to the global pandemic, I felt cheated of my personal art consumption.  Of course, in light of recent events, it is fair to argue that engagement in anti-racist literature supporting the Black Lives Matter movement, as well as keeping safe during Covid-19 , is of greater importance; thus interaction with the art sphere has understandably taken a back seat.  However, now that gallery spaces are gradually beginning to re-open, I have added a slightly surprising additional show to my artistic menu:  the compilation of works from Channel 4’s Grayson’s Art Club, an initiative set up and curated by British artist Grayson Perry.

The basic premise of the series involved Perry providing a broad theme each week for the general public to use as a creative catalyst.  Although some of the themes felt a little ‘GCSE Art’ (examples being ‘fantasy’, ‘animals’ and ‘a view from my window’), I was genuinely surprised by the range of interpretative endeavours of people across the country, and also deeply impressed by the general public’s technical capabilities. With good reason, the weekly prompts required a certain level of accessibility, and too niche a topic would not have translated well. Nevertheless, the choice of ‘animals’ as a theme seemed a little lazy to me.  Note to Perry: you can do better.

Each week he invited a celebrity guest to embark on a creative quest, the pair conversing via zoom. In some ways this was the least satisfactory segment of the show. Attempts at humorous banter were hindered by the ever-lagging realities of an online call. Having tuned in in anticipation of an hour with the artist himself, I was baffled as to why I found myself watching comedian Joe Lycett paint a portrait of Chris Whitty in episode one, for example.  I became so disengaged from the art that I started snooping in on their home interiors (in Lycett‘s defence, he did have an exceptional drinks trolley). More successful, however, was when Perry spoke with established British artists, including Jeremy Deller and Antony Gormley. The creative communication between practicing artists was informative and insightful, and on a more fundamental level the interconnectedness of the industry was something that I had not really previously considered.

The heart and soul of the series was of course the general public and their creations. Perry would interview a selection of people each week to elaborate on their interpretations of the theme, whilst also giving personal accounts of their connection to the arts. I shall not spoil the intricacies of any of the stories and will leave you to discover the heart-warming tales for yourselves. Suffice to say that by the end of episode five, my family and I were weeping.

Viewers were invited into the workspace and studio of Grayson and Philippa Perry and given a tour of their weekly responses to the thematic prompt. The viewer was introduced to Alan Measles, Perry’s teddy bear, who he once described in The Economist as the ‘benign dictator of [his] imaginary world from about the age of four up to fourteen’. This character has clearly been a long-term influence on his art. However, I found the repeated use of his image a little jarring and would have personally preferred to have spent time with Perry’s female alter-ego, Clare. That being said, the extent and variety of Perry’s technical expertise in response to the themes was impressive. I particularly enjoyed his vase in episode six, which he adorned with sardonic depictions of the current political climate (notably that of Dominic Cummings heading to Durham) for the weeks theme of ‘Britain’. I found Perry’s explanations of his processes to be greatly insightful, adding a further personal touch to his work.

Finally, we as the viewer had the pleasure of being introduced to Philippa Perry. I had never heard or thought too much about Perry’s partner prior to this show, however, I soon fell in love with her. Not only does she have that warming art-teacher quality, but her work is of an equal, and at times even better quality, to that of her husband. I particularly liked the decorated ceramic bowl that she made for her daughter’s flat share, titled The Gay Commune. Brilliant!

This six-part series did often feel a little forced in its mission to promote the visual arts to a mainstream Channel 4 audience. But even as an undergraduate Art Historian, I can only applaud the Perry’s wholesome efforts. The show makes no claim to be either academic or intellectual. In fact, the beauty of Grayson’s Art Club is its simplicity. Transitioning from spending two hours in an auditorium surrounded by like minded students being lectured about the idiosyncrasies of Ancient Roman architecture, to sitting in my family living room watching Perry for an hour, I am conscious of having experienced two very different approaches to thinking about art. However, the programme did provide an hour of uplifting art-based fun; Perry’s laugh alone is infectious and creates its own joy.

I look forward to seeing the forthcoming exhibition of the works, knowing the people and stories behind each creation. If you are seeking a break from the realities of the current climate and looking for a little escapism, Grayson’s Art Club is a good shout.

All six episodes of Grayson’s Art Club are available to watch on All 4.