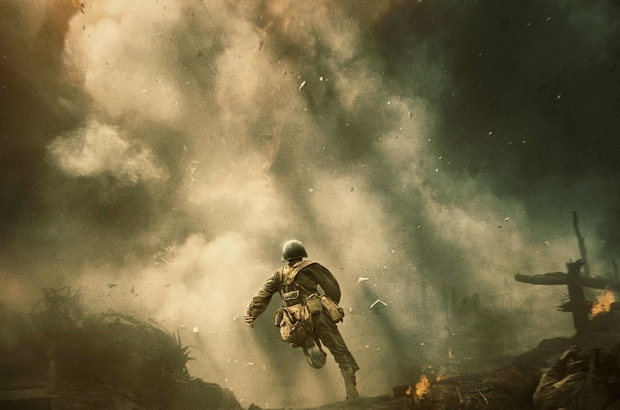 ‘Who the hell is Desmond Doss?’ shouts a senior officer to Captain Glover (Sam Worthington). Glover is delaying an attack on Hacksaw Ridge to allow the combat medic, Doss (Andrew Garfield) to finish praying. Doss’ peculiar ways make him an outsider to the camp from the moment he enters. He’s the sort of chap Malcolm Gladwell writes about in David and Goliath, blessed with a ‘desirable difficulty’; difficult because he is a ‘conscientious objector,’ but blessed with an idiosyncratic strength to circumvent the issues caused by his unique situation.

After a childhood beset with violence and witnessing his veteran father descend into alcoholism, Doss develops pacifist convictions through his Seven Day Adventist faith. Despite this, he signs up to the US Army in WW2. After refusing to handle a weapon during his basic training, he becomes a pariah among his unit. Beatings and a court martial ensue, but he is found not guilty due to a signed letter from a Brigadier-General saying that Doss’ stance is protected by the US Constitution. The action then moves to the Battle of Okinawa, and his division’s bloody attempts to take a ridge held by the Japanese.

Hacksaw Ridge documents Doss’ one-man expedition to save wounded soldiers trapped behind enemy line on a ridge that is crawling with Japanese soldiers after they retake the ground from the Americans.

This is not a pacifist film per se. The action scenes are so mesmerising that the movie should be renamed ‘Mel Gibson is Back with a Bang’. Hacksaw Ridge’s quantity of blood and guts makes Saving Private Ryan look like The A Team. Rats and maggots eat into the dead, while legs become separated from their owner’s bodies. It is pacifism crossed with Japanese crime drama gore, which makes for one of the most realistic cinematic depictions of combat in recent times.

Hacksaw Ridge is shockingly brutish, but it is interspersed with a human conscience that stops the movie from glorifying violence. Doss crawls over dead bodies and escapes Japanese soldiers to bring the wounded back from the battlefield. Every time he brings back a comrade, he returns to the front again, always praying ‘Please Lord, help me get one more’. The sight of Doss dragging Sergeant Howell (Vince Vaughn) on a stretcher as he shoots the oncoming Japanese soldiers is pure Hollywood, but also purely believable. Doss became the first American to win a Congressional Medal of Honour without shooting anybody.

Gibson finds time for the laughs and nuances that make the film and its characters wholesome. The verbal confrontations between Vince Vaughn’s Sergeant Howell and his Drill Sergeant provide comedic relief. We see Doss fall in love in that awkward but happy-go-lucky way that gives him a teddy bear-like sweetness. We see him confront his father over his wife-beating antics, and save a Japanese soldier’s life with morphine. Doss really is incapable of violence. His infantry unit is full of people who change their mind about him, particularly Smitty (Luke Bracey) – a playground bully type – who initially despises him, only to confront Doss in a foxhole to tell him how much he misjudged him. A short moment in the battle where Smitty shoots a Japanese soldier trying to kill Doss is one situational ethicists could write long essays about.

Being directed by a conservative Catholic, it is no surprise that Hacksaw Ridge is a Christian movie. It even contains one slightly corny moment where Doss has a rapture-like levitation on his stretcher into the sky. But more importantly, the film reflects on the duality of man: the conflict between the desire to protect life through acts of love and compassion, and the conflict to save your own life through violence. We are all a mixture of the human and the animal; and Hacksaw Ridge studies that conflict in a very subtle manner.

Like Doss, Gibson is seeking absolution for wrongs he has committed in the eyes of authority. This is a film about redemption that happens to be a war epic. It may just be Gibson’s finest work, not because it is his magnum opus, but because – like Doss – his actions have salvaged his reputation.