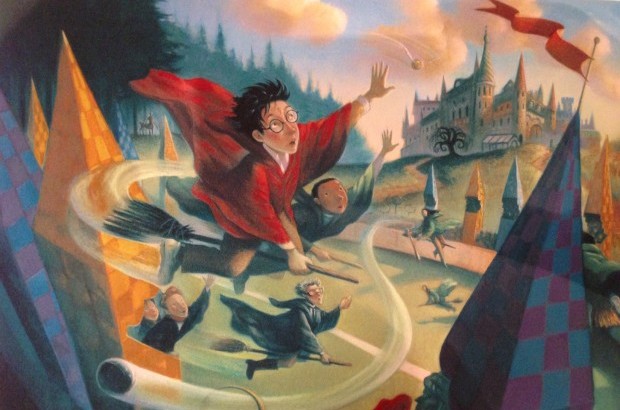 NIALL ADAMS considers questions of creative ownership prompted by the release of ‘Harry Potter and the Cursed Child’.

The launch of the newest work in the Harry Potter franchise–whether you view it as a serious artistic endeavour, a gift to legions of fans or an easy cash printer for the producers and publishers–has sparked debate about who really owns and controls a story: the initial creator or subsequent readers.

To be brief, Harry Potter and the Cursed Child is both a phenomenal theatrical experience and an incredibly flawed book. On stage the skill of the actors and ingenuity of the creative team create a magical performance. The older cast bravely take on the roles of characters played by others for eleven years and in many cases are a significant improvement upon their film counterparts. Poppy Miller’s Ginny Weasley, particularly, is a breath of fresh air after the drab performance of Bonnie Wright. The work of the production team is simply astounding. Special effects seem to bring real magic into the already sumptuously designed stage.

However, many people (including this writer) will approach the new story initially in the form of a mediocre printed script, one which crucially lacks the rich creativity of John Tiffany’s direction. The tone of the original novels is lost amidst poorly written dialogue and dubious plot decisions. Although the book itself is not written by the series’ creator J.K Rowling, it has received her blessing and been endorsed as effectively a canonical sequel to the Harry Potter saga. In response the Harry Potter fandom has been divided between those embracing the new text and those rejecting it as uncharacteristic of the source material.

Fans, increasingly, feel a sense of ownership over a story, a trend which has been bolstered by the digital world. Harry Potter was released alongside the proliferation of the internet and has catered to one of the first generations intimately engaged with the online world. This allowed for a whole raft of fan created materials, whether this be fiction based upon the novels, artwork or simply theories regarding the future of the characters and fictional worlds. Fan-fiction has, in many ways, become a sub-genre of literature allowing ardent lovers of a franchise to place their own mark upon a text and claim some semblance of ownership.

This phenomenon has not remained constricted to the online world. Increasingly the popular literary market has become overrun by texts which are in essence a form of fan-fiction. E.L James’ Fifty Shades trilogy, reworking an early online story of hers based upon Stephanie Meyer’s Twilight, dominated bookshops in late 2012 and became one of the fastest selling books of all time (despite its rather terrible prose). Twilight itself can be seen as a modern reworking of Pride and Prejudice with an added vampire gimmick for good measure.

However, in many ways fan fiction is as old as literature itself. Think of the fathers of the English Language: Chaucer and Shakespeare. Both revolutionised literature in differing ways and both undertake projects similar to the modern concept of fan fiction. Both authors’ use of the Trojan myth exhibit a progression from the source work of Homer. Chaucer constructs Troilus and Criseyde by embellishing and expanding upon Boccaccio’s Il Filostrato (an Italian text focused on minor characters within the Iliad) in a manner similar to many modern fan-fiction writers. Shakespeare in turn adapts Chaucer’s poem into the play Troilus and Cressida, alongside many plays taken from other authors’ works.

This is not to say that online fan-fiction is of the same calibre of these classical texts. Nor is it implying that their method is shared with the fandom subcultures of today. Yet, no-one denies Chaucer or Shakespeare’s ownership of the texts, so perhaps fans’ claims of authority over characters should not be so easily dismissed. In a very simplified form of Barthes’ theory of the ‘death of the author’, the readers’ response to a text defines it. Once an author has published a text, it lives on through those who read it: the author ceases to retain control over the world they have created.

The initial fan reactions to the published script of The Cursed Child are perhaps then completely justified. With the publication of the final book in the main Harry Potter series, the characters and story passes to the fans. Even a story endorsed by the original author cannot be forced into canon against the will of those who now own the text, particularly if there is a strong consensus that it detracts from the established canon. In a world where readers can easily connect online and share their own contributions towards a text, it appears the once absolute power of the author is indeed in terminal decline.