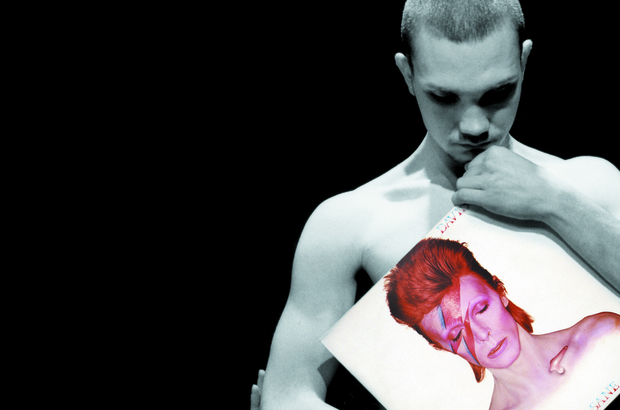 ELLA WILSON reviews From Ibiza to the Norfolk Broads at Jacksons Lane.

From Ibiza to the Norfolk Broads is about David Bowie, but it isn’t really about David Bowie. As the titular lyric lifted from ‘Life on Mars’ suggests, this one-man show is about a journey. That journey is newly 18-year-old Martin’s, and his life is one plagued by all the normal hallmarks of teenage angst, but punctuated with the real emotional beats of abandonment, mental health issues, and eating disorders. Martin’s journey of self-discovery through London has resonances of Mark Haddon’s The Curious Incident of the Dog in the Night-time and Jonathan Safran Foer’s Extremely Loud and Incredibly Close. Through walking in Bowie’s steps, Martin walks in his father’s.

Adrian Berry’s writing and direction is often sharp, and Alex Walton is a chameleonic actor, who skilfully transitions between the narrator figure and the colourful characters who populate Martin’s life. Martin himself is a timorous presence and Walton often folds his limbs into himself, making himself appear smaller. Perhaps he plays Martin slightly too young for his 18 years; his high-pitched voice and naivety, though beguiling, set him in his early teens, rather than on the precipice of adulthood.

Martin subscribes to every stalwart of edgy teenage angst – he reads Burroughs and Bukowski, he prefers vinyl to CDs, he stalks graveyards like a prepubescent Morrissey. As the narrator observes of the heavily Brian Eno inflected B-side of Bowie’s Low: ‘swooning, dramatic, depressing – right up Martin’s strata.’ Most of all, he loves David Bowie, that ‘creature – glamorous, mysterious, androgynous’. As the piece progresses, we realise that Bowie is a way for Martin to connect with the absent father he has never known. From his first discovery of the box of paraphernalia in the attic, in which he finds a polaroid of his dad almost touching Bowie, Martin’s obsession becomes a way to almost touch his dad.

The set is sparse and tightly designed – a simple backdrop for projections and a stage littered with boxes which double as shop counters, benches, phone boxes. The soundtrack is flushed with Bowie classics, and extracts of his writing, but most effective is a stripped back, vocal version of ‘Five Years’. Without the instrumentals we realise that the end of the song descends into pained shrieking. As Bowie’s voice crackles, almost sobbing, Martin is going through significant emotional upheaval of his own.

In its portrayal of mental illness and eating disorders, the play is one of hits and misses. It throws everything at the wall and hopes something will stick; not everything does. The scenes between Martin and his therapist are effective. When she suggests his disorder is about looking like Bowie, who famously rarely ate, I was concerned, but the scene veers in the right direction and concludes that Martin’s disorder is all about having control over himself, in his out of control life. Martin’s breakdown in the kebab shop is a particularly mixed bag – his actions don’t necessarily ring true, but many of the things he says do, such as when he describes his horror and disgust at perceiving himself getting fatter and fatter as he finally eats. His panic attack feels viscerally real.

The piece uses the Philip Larkin poem ‘This Be The Verse’, but often defaults to the maxim ‘They fuck you up, your mum and dad. They may not mean to, but they do,’ rather than probing deeper into Martin’s psyche. Significantly, Martin can never remember the final verse of the poem – it is only when he reaches the end of his journey that he is reminded of it: ‘Get out as quickly as you can, and don’t have any kids yourself.’ This was his father’s favourite poem to recite. A Bowie obsession is not the only legacy his dad has left behind: ‘Man hands on misery to man’.

Martin’s parents certainly have fucked him up, but his mother is given little characterisation beyond her alcoholism, and I found myself wanting to know more about her. Martin might resent his present mother and idolise his absent father, but the piece itself never acknowledges that this might be an unfair view, and it would have been nice to see her character portrayed with more nuance. After all, as she says: ‘I’m still here, and he isn’t.’ In the journey’s climactic letter, it didn’t feel like the dad got the condemnation he perhaps deserves. He states his reasons for leaving, which boil down to: I was ordinary, and this was tragic, so I had to get out. Desperate to be significant, but tragically ordinary: this is recognisable, and heart-breaking. But the scene smacked of untapped potential.

Martin seems to come to some sort of realisation about himself when his therapist asks: ‘If your dad was back, would it be better?’ After instinctively crying ‘Yes!’, Martin pauses, and says quietly: ‘No.’ After the reading of the letter, the play’s oblique ending wisely resists neat resolution. Martin’s issues are not easily resolvable – they will be with him for the rest of his life. Though compelling and often well-observed, I came away wishing the piece had hit me more viscerally – it never quite reached the emotional heights it had the potential to scale.

From Ibiza to the Norfolk Broads ran at Jacksons Lane from 4th-10th March, and is now continuing its tour. Find more information here.