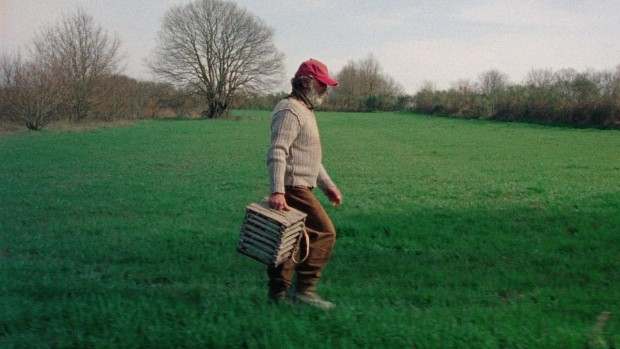 Tuscia – an archaic region in central Italy – is an area steeped in history, straddling ancient cultural fault lines. At one point encompassing a significant portion of Etruscan Italy, it was steadily encroached upon following the Roman conquest, and its roots to a distant past lie dormant, almost extinguished. The imposition of modernity is glimpsed from the opening conversation of Il Solegno; inside a hunting lodge, a group of men from a Pratolungo village (in modern-day Tuscia, about sixty miles north of Rome) discuss the influx of foreign hunters on their territorial soil. Hercules, the self-appointed patriarch of the group, angrily cries, ‘I don’t want outsiders! I want local people.’

This conversation between the past and the present offers a suitable backdrop for the story told in Il Solegno. The documentary consists of these hunters drawing together the threads of rumour and conjecture that compose the life of Mario de Marcella, a mysterious hermit who haunts the nearby valley. The village is modest and melancholic; small, verdant slopes are lined by trees and pylons, abutted by Romanesque buildings shored up with corrugated iron and overseen by a blank grey sky.

We glimpse Mario only very rarely, if at all. There’s a hirsute figure in a red cap, glimpsed through a web of branches. He wanders through the fields purposefully, tracked from the side before he outpaces the camera and disappears out of frame. Is this Mario? No, it turns out: it’s Bruno, a man with the dubious claim of speaking for Mario. We return to the hunters, and continue to encounter Mario only by proxy, always at arm’s length, mediated through a haze of hearsay and rumour. ‘We human beings can’t understand things we haven’t lived,’ one hunter says, and the film makes us constantly aware of this yawning empathetic void.

Instead, the village’s speculation and anecdote – ‘quella voce nel paese’ – comprise the murky legend of the solegno (a rural slang term for a boar singled out from its pack: this is how most of the men refer to Mario). The filmmakers have an unobtrusive, almost invisible presence; the interviews are addressed directly to a static, passive camera, and are frequently contradictory. Mario was born in prison, claims one sat at the head of the table, after his mother murdered his father. ‘No, no. He was a year old when he entered the prison,’ contests another, shot at the same table from a side-on angle. All are obsessed with the story of his murderous, millenarian mother, and while they can’t decide when Mario entered the prison, they all agree he ‘left it a young man’ – although it’s not clear if this is meant literally.

The origin and fate of Mario becomes more than a mere talking point for the hunters; it is an anchor in their own personal histories. The day of his father’s death, for instance, is a hotly contested epoch – one village man claims that he was baptised on the day it happened, another says it was much earlier, on the day of his mother’s birth. The role of the myth is evidently interpretive, with the religious blaming the mother’s witchcraft and prophecy, and others telling the tale as a warning against madness. One man views Mario’s solitude as a retreat from modernity: ‘back then, people cared for each other more’.

The film is a deliberately paced, inching through its 65-minute run time patiently. Towards the end we visit the cave in which Mario lives (or lived?), deep in ‘una campagna di un tempo’ (a countryside of long ago). The valley is prone to flash floods that render it inaccessible, and the cave, with its scraped walls and inscrutable miscellanea, embodies the hermetically-sealed mind of Mario.

The film concludes with a voiceover from someone who may, at last, be the man himself. With a voice like cut-glass, wheezing with the richly-textured rasp of age, he tells of his childhood sweetheart, killed by an adder, expiring alone. It’s by far the film’s most arresting, oddly unnerving sequence, as he speaks in clipped, enigmatic phrases, of vipers ‘singing on the rock’; of his lover now living ‘up there’; of there being ‘no sense of time here’ – wherever here is. All the while, the camera slowly roves around the winter-stripped trees of the valley, an obvious but effective stylistic borrowing from Terrence Malik.

No sooner does the film suggest this solution to its central mystery, but it immediately casts it in doubt, with a shot of the speaker curled up on a bed, not a cave, clean and shaved. With a weary, whistling sigh, he concludes the film with, in hindsight, the only words that could possibly suffice: ‘you’ll never know those things.’ Mystery can be both engrossing and frustrating; Il Solengo delicately balances both.

‘Il Solengo’ premiered at the Open City Documentary Festival last week. You can find out more about the festival here.