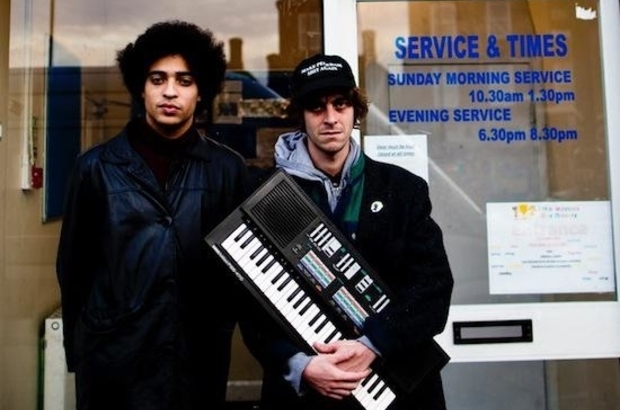 The story of Insecure Men starts with a primary school friendship in Herne Hill, South London between the band’s two frontmen, Saul Adamczewski and Ben Romans-Hopcraft. In the early years, the two were polar opposites, as Saul recalls: ‘Ben has a twin brother and they were in the year beneath me and I used to try and get them to bunk off school with me… but I never did succeed. They were these sweet boys who I always tried to corrupt.’

This marriage of opposing textures, Saul’s darkness and Ben’s innocence, can be easily read in the band’s debut album of last year, Insecure Men. Anyone familiar with Saul’s other projects will agree in saying that he’s a madman. His teenage years witnessed his involvement in the indie punk five-piece, the Metros, who were chosen to open for the Coral in 2007 but were replaced shortly after smashing a glass bottle into the audience and injuring one of the spectators. His later project, the Fat White Family, produced two groundbreaking albums that sought to express the artistic ugliness of humanity. While Saul’s songwriting was taking inspiration from dark historical tales and heroin addictions, Ben’s own project, Childhood, was experimenting with the combination of West Coast psychedelia and British street soul. It took some courage and a little bit of fate for the two to start recording together in Fat White Family’s practice space, and to come to the realisation that, musically, they perfectly complemented each other. Joined by Nathan Saoudi (Fat White Family) and many more, the kindred spirits embarked on another journey with an extravagant line-up to produce what Saul calls ‘pretty music with a dark underbelly.’

The album was released by Fat Possum Records in early 2018. The album cover (designed by South London visual artist Edie Lawrence) is reminiscent of North Korean propaganda posters. When asked about the reference, frontman Saul Adamczewski gave a typically witty response: ‘People in bands often have overblown, ridiculous ideas about themselves much in the same way silly dictators do … just put your head on their head and that’s it.’

The band members are not too uncomfortable to dress up as city gents in stylish berets, representing an idealised past seen through rose tinted glasses. The video of ‘I Don’t Wanna Dance (With My Baby)‘ depicts a solo Saul Adamczewski forlornly swaying among school children attending a ball, repetitively singing ‘I don’t wanna dance with my baby / in front of the whole street / I don’t need advice from my brother / on how to keep baby sweet’. There is a sense of nostalgia for childish romances that is unexpected from its primary songwriters. Saul revealed that part of the process of making the album was buying compilations of 1960s kids’ music and drawing influences from them, and this is evident here.

Despite the disguise of their debonair looks, pretty lounge pop and tuneful melodies, the group’s lyrics are not afraid to cross into darker subject matters such as Operation Yewtree and the death of Whitney Houston. The controversial track ‘Mekong Glitter’ is inspired by the life story of the ex-glam rock star Gary Glitter who, at the height of his career, committed many child sex offences and went unpunished for forty years. ‘Whitney Houston and I’ portrays the mysterious deaths of Houston and her daughter Bobbi Kristina Brown, retold from the perspective of the latter’s ghost. Joined by a children’s choir, Saul’s sorrowful vocals deliver a tale of heightened urban mania, decrying the ugliness of celebrity lifestyle and modern society’s obsession with it: ‘Whitney Houston and I both like a hot bath / Whitney Houston and I both like warm water.’ The album paints a skewed, darkened picture of the old pop world where its glamour is stripped clean, capturing the fine line between extravaganza and grotesquerie.

The rest of the album reflects upon the personal and the everyday. ‘Heathrow’ is a three-and-a-half-minute instrumental about the waiting rooms in Heathrow airport. ‘The Saddest Man in Penge’ was written during Saul’s time in rehab when he would quite literally describe himself as the saddest man, in Penge. However, he remarked, the song could have been about anyone who has ever lived in South London, who has seen the filthy streets and cheap commodities and managed to keep pursuing what is worthy in life.

The subject matter of Insecure Men’s debut sprung from frustration and detachment; but there is a dabbling wholesomeness and heart-warming quality to the music. One would hope that the journey of Insecure Men continues, and that the audience keep listening faithfully.