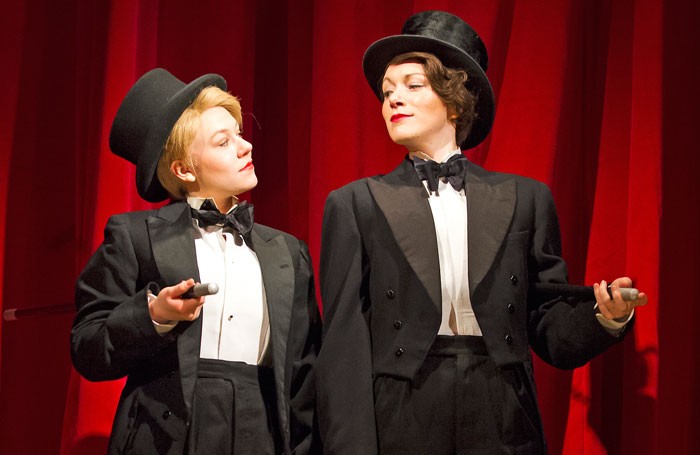 Before the house lights dim, a top-hatted, tail-coated figure strolls out in front of the curtain and a brash, cockney welcome echoes around the auditorium. This Victorian music hall master of ceremonies—our host for the evening—scoffs at the ‘reverential hush’ of his well-mannered 21st century audience. At the clack of his gavel we are whisked back to fin-de-siècle Britain to meet Nancy Astley (Sally Messham), an oyster girl from Whitstable who haunts her local music hall every night in the hope of catching a rose from magnetic male-impersonator Kitty Butler (Laura Rodgers).

Adapted from the critically acclaimed novel by Sarah Waters, ‘Tipping the Velvet’ is the latest  from Laura Wade, best known for her Bullingdon club parody ‘Posh’. Wade’s dexterous decision to frame the narrative as a music hall show lends this stage adaptation an exuberant charm. With each clack of the chairman’s omnipotent gavel, we are transported from one climactic moment in Nancy’s life to another, looking on voyeuristically as she transforms from ‘wilted cabbage leaf’ to celebrated music hall star, to ‘exquisite little tart’ of Sapphic high society.

As if Nancy’s life isn’t a spectacle enough, the action is interspersed with playful and witty musical numbers. Contemporary songs have been arranged in a Victorian music-hall style, which is very much in keeping with the spirit of the show. By no means a historical piece, the play borrows the Victorian setting as a backdrop for a rollicking coming-of-age cum lesbian love story with a much more modern feel. Nancy feels no confusion or guilt about falling in love with a woman, an experience that seems wonderfully detached from the historical context. In this regard, the piece remains true to the original vision of Waters, whose intention was ‘not to be authentic, but to imagine a history that we can’t really recover’.

Yet it would be impossible to stage a play set in the Victorian era without alluding to the harsh reality of social predicaments for women. The play refers to issues such as domestic abuse and prostitution, but with a blasé attitude that some may find unsettling. On finding herself unemployed and alone, Nancy is cheerfully initiated into the world of renting without regard for the trauma that such a situation would almost certainly have caused.

Although the music hall format allows for revelry in abundance, it can feel restrictive at times. The play seems preoccupied with retaining a comprehensive sense of feel-good frivolity, stifling the potential for a more nuanced balance of hilarity with moments of genuine pathos. Scenes that have the potential for expression of powerful emotion feel dominated by incessant wisecracking. In one scene, heartbroken Nancy hangs suspended from a meat hook in a blood-smattered dress. Messham—who gives an impressive performance in her stage debut—expresses her grief while the ensemble play the pig carcasses strung up beside her like xylophones, creating a bizarre and uncomfortable incongruity.

The chairman and ensemble are unrelenting, relishing the opportunity for a spectacle. Perhaps Wade is making a quiet statement about the male gaze dominating how we have heard the stories of women for centuries, an interpretation encouraged by the feisty heroine’s eventual self-liberation from the chairman’s tyranny. She takes the story into her own hands quite literally, snatching the gavel from his grasp. It’s difficult to decide whether this is a feminist statement or a predictable gimmick.

One moment that successfully balances the music hall motif with a genuine beauty and seriousness is the aerial sex scene in which Nancy and Kitty perform a circus-like silks routine, suspended above their bed. It’s a brilliant representation of what first love feels like; soaring high above the ground, entirely trusting your partner to support you.

In essence, the play is an unapologetic and uncomplicated celebration of lesbian eroticism and freedom of love. Despite lacking some depth and subtlety in terms of character and plot, ‘Tipping the Velvet’ is gloriously entertaining and you can’t help but leave the theatre in the highest of spirits.

‘Tipping the Velvet’ is playing until 24th October at the Lyric Hammersmith. To book tickets visit http://www.lyric.co.uk/whats-on/production/tipping-the-velvet/.