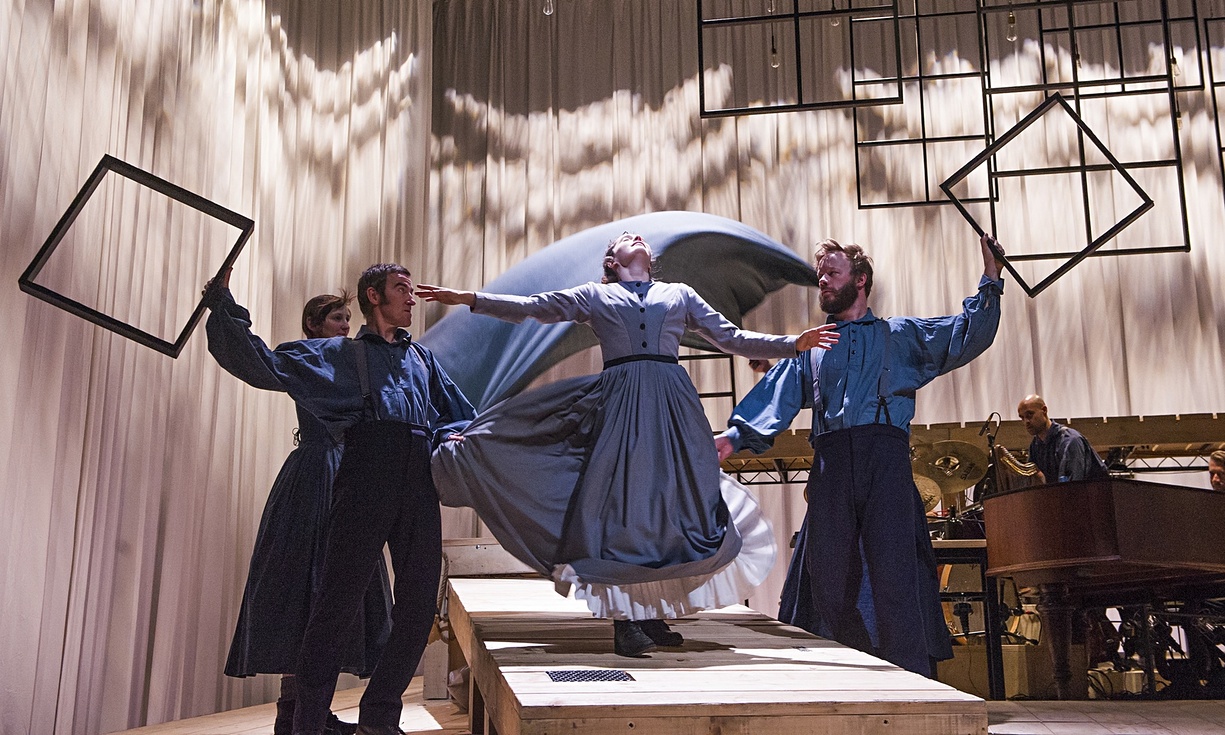 ‘It’s a girl!’ resounds around the Lyttelton Theatre, as Sally Cookson’s directive re-imagining of Charlotte Brontë’s 1847 classic begins with Jane (Madeleine Worrall) announcing her own entrance into the world through a series of wrenching infantile cries. Originally ‘devised by the Company’ as a two-part play for Bristol Old Vic, ‘Jane Eyre’ has been adapted and abridged into a single, albeit pretty lengthy, 210 minute play for the National. The audience take their seats to find themselves contemplating the modern minimalism of the static set. Made up of wooden platforms and iron ladders it encloses a grand piano, drum kit and various other instruments of the band centre stage.

With a main cast of six actors, the majority of whom play a range of different roles within the play, ‘Jane Eyre’ can only be described as a team effort throughout. The cast take on a unified role during the performance, acting together as the collective voices of Jane’s tormented inner monologues and creating the onomatopoeic sounds of slaps and knocking. The effectiveness of the cast’s efforts as a company is obvious, yet also leaves room for each actor to convey their own capabilities to the audience. Alongside some nifty wardrobe tricks, the sheer talent of each member of the company allows them to take on numerous roles whilst still succeeding in portraying the distinct, individual characters.

The unprejudiced delegation of roles allows for the flux between age, race and gender of the cast and their characters in turn. Rochester’s moody countenance (portrayed by Felix Hayes) is offset by the nature of his dog, Pilot (Craig Edwards). Unlike in the novel, Pilot becomes a significant feature of the play. Edwards remarked that his stage representation of Rochester’s dog evokes the idea that ‘Pilot can do what Rochester would love to do – have a physical relationship with other people’. This seems a profound and intelligent addition to Brontë’s novel, whilst also providing some easy laughs.

‘Jane Eyre’ is triumphant musically, with the play owing much of its effectiveness and rapport to the small band of three (Phil King, Benji and Will Bower). In a play that (despite its length) still struggles to convey the whole the novel in all its grandiosity, the musicians are crucial as accompaniments to the movement, expressing the dialogue and physical acting that cannot be portrayed. Striking musical interludes paired with minimal set effects – bursts of flame, suspended dresses and mobile light bulbs, to name a few – act as non-verbal descriptions of feelings, thoughts and emotions within ‘Jane Eyre’.

The seemingly dissociated role of Melanie Marshall as the chorus soon develops into a revelation of her being Rochester’s insane wife, Bertha. Marshall’s eerie and haunting tones are a constant and unnerving presence throughout Jane’s time at Thornfield Hall and the differing form of communication cleverly distinguishes and isolates Bertha from the other characters in the play. Unexpected and flawless renditions of ‘Mad About the Boy’, and, even more surprisingly, Gnarls Barkley’s ‘Crazy’ are greeted by the audience with some bemusement, yet prove to be striking additions to the play.

‘Jane Eyre’ concludes with Jane’s return to a fire-stricken Thornfield and a blinded Rochester, with the play culminating in the birth of a baby daughter. The resounding cries of ‘it’s a girl!’ bring the play full circle, as though attempting to rectify the unjust sufferings of ‘poor, obscure, plain and little’ Jane Eyre.

‘Jane Eyre’ is showing at the National Theatre until 10th January 2016. For tickets and more information go to http://www.nationaltheatre.org.uk/shows/jane-eyre.