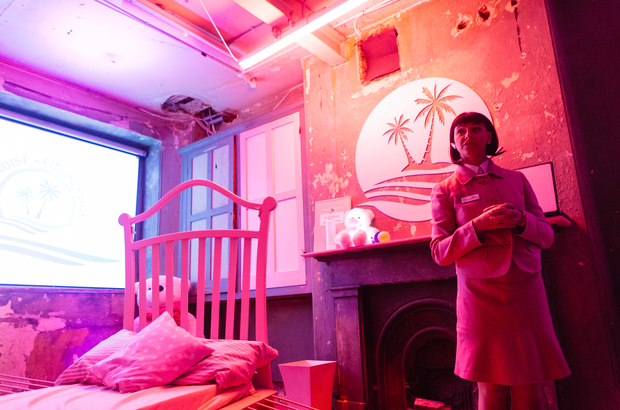 WILL NORMAN reviews MADHOUSE re:exit at the Shoreditch Town Hall.

Upon entry to Shoreditch Town Hall, in lieu of a ticket, a brochure for ‘Paradise Fields PLC’ social care conglomerate is presented to anyone attending Madhouse Re:Exit. The promotion boasts of a ‘cutting edge, minimal intervention, truly modern care facility’, and inside the front cover beams the ironic tagline: ‘At Paradise Fields PLC, we are committed to getting our service users to paradise.’ This is the first introduction given to the latest immersive theatre piece from Access All Areas, a dramatic showcase for learning disabled and autistic actors. The show is concerned with the treatment of people with learning disabilities of varying type and severity, and the way they are perceived by the broader community. It conveys the experiences and ideas of five individual actors with an intensity and variety designed to unsettle and challenge the audience.

The show is initially set in Paradise Fields, with the audience taking on the role of a tour group being guided through the pastel-coloured corporate nightmare by a series of robotic, smiling secretarial types. The audience is immersed, assigned an active ‘role’ as observers of the facility; this is a show that attempts to blur the lines between performance and interaction. The setting of ‘Paradise Fields’ opens up one of the show’s major thematic veins, in the way that both the fictional brochure and the pink pastel women (the most prominent of those played by Francesca Burgoyne) subtly dehumanise and devalue the ‘service users’ through their language. Corporate jargon abounds in the literature of the fabricated PLC, and is spouted on occasion by the employees of the company: ‘Service users’ and ‘efficiency savings’ are all dished out in the opening sequences of the piece, and are thrown into sharp relief when an eerie voice urging the audience to ‘follow the money’ is first heard. Exposing the industrialised ‘care’ systems of both past and present, and the impersonal and dehumanising experiences of some of those in care today, is in large part the overarching purpose of Madhouse Re:Exit.

Once the audience is drawn out of the planned ‘tour’ of Paradise Fields, they are confronted with ‘Patient 36’, the number assigned to all of the characters, who appear in separate scenes. This unity of identity amalgamates the experiences and dehumanised undercurrents of the different sections. ‘The Escapist’ (David Munns), ‘The Bird’ (DJ Hassan), ‘The Eater’ (Dayo Koleosho), ‘The Goddess’ (Imogen Roberts) and ‘The Baby’ (Cian Binchy) each have a scene to themselves at different points as the audience moves around the work, in a variety of mediums from dance and monologue to a particularly novel – if unsettling – game in the ‘Eater’ section.

One of the things that links the different scenes and fragments of Madhouse is the unnerving sense that, as part of an audience that has already been handed the fictional role within the play of a ‘tour group’, you are watching the varying scenes on some level in a voyeuristic way. This is most starkly apparent in the second scene, DJ Hassan’s ‘The Bird’, where the actor – adorned in a brightly coloured and feathered bird suit – dances to a haunting tune in a giant bird cage. Standing passively, looking on, the piece excellently imparts the role of a voyeuristic observer onto the audience, to the point where the intimacy of the experience becomes almost uncomfortable. The audience member, in their fictional and real roles of spectator, becomes voyeur to the performer as spectacle, a relationship perhaps deliberately analogous to that between non-disabled society and those with learning disabilities. The audience member is forced, at the most impactful moments of the piece, to evaluate their own position and reasoning behind watching the performance; the fact that the performers themselves have learning disabilities and each personally created their own scene based on their own experiences and research gives it an arresting intimacy.

Aspects of the work are, of course, more effective than others. There are moments – particularly in the final two sections – when certain ideas don’t chime as well with the audience, and fail to maintain the intensity that preceded them. One notable example, as the show takes the current political discourse and landscape with regards to social care and disability into its remit later in the show, was a fairly incongruous and on-the-nose criticism of current government policy. While an important statement to make, this fell flat in comparison with the more artistically poignant material preceding it.

Nevertheless, watching Madhouse Re:Exit is a strikingly intense experience, with the strength of the artistic achievement shining through. The best parts of the production force the audience into the disquieting role of voyeur, forcing us to examine our own and wider society’s perceptions of those with learning disabilities.