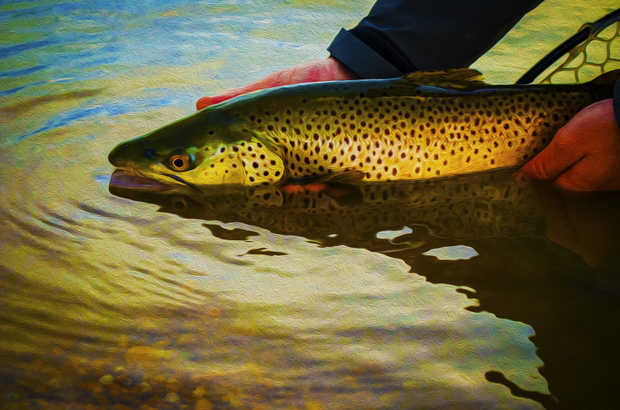 As the audience cross the stage to their seats, actor (and director) David Aula is already sitting in the performance space. He’s a big jovial man, with a scruffy beard and glasses from behind which twinkling eyes are watching shrewdly. It is a bit uncomfortable sat up in the chairs with this man expectantly observing his crowd but then, with a wry smile, he stands up.

Maisie Says She Loves Me is a one-man monologue with an incredible script written by Jimmy Osbourne. Throughout the play Aula draws on the audience, handing out beers and wine to various members but most significantly projecting the character of Maisie onto a front row theatregoer. The play is a story about its protagonist Sheldon’s life and his past, and gradually implies how his relationship with his father has shaped who he is today. But more than that, Maisie is a portrayal of the male psyche, significantly being staged at a time when it is becoming more and more acceptable for men to admit to vulnerability.

At the heart of this performance is a convergence of ideas of masculinity and control. Sheldon doesn’t drink alcohol. Sheldon arranges his books in order of their colour. Sheldon likes silence and neatness and his own space. He freely admits that he finds it difficult to talk to Maisie about his family and his sister. He finds her family too chaotic and noisy, choosing instead to escape to the bathroom to avoid them. This all roots back to his idea of what it is to be a man: he is constantly trying to hold himself in and, when he does snap, thinks of it as weakness. 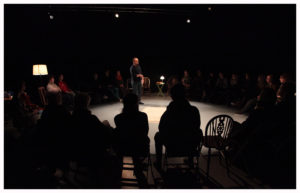 Ultimately it is revealed this masculine need for autonomy stems from Sheldon’s relationship with a violent and volatile father. At moments throughout the play, he steps on to a raised platform where, in the setting of the peaceful lake where he likes to fish, stories of his father unravel. As the narrative progresses, stories of a seemingly benign relationship escalate in intensity and it quickly becomes apparent that something sinister threads through these stories of Sheldon’s childhood. In an attempt to separate himself from his father, Sheldon makes use of fishing as a meditative ‘cast/reel’ exercise.

The play cleverly reveals how this relationship has shaped Sheldon’s view of the world and, most importantly, his relationship with Maisie. This is explained most powerfully though lighting. The beginning of the play sees clear distinctions between the blue light of the past and the brighter white light of the ‘present’; as the play progresses, these changes merge and the blue light is carried over into Sheldon’s recollection of his interactions with Maisie. This, more than anything, paints a clear picture of Sheldon’s character: a man striving hard not to be his father and yet the mergence of his past and present show that it is not that easy to escape the influences of his upbringing. 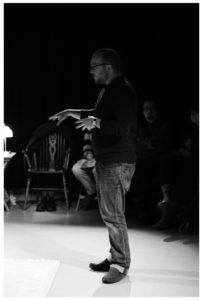 Through imagery and dialogue, Osbourne suggests that, beyond the jovial façade, and the frenetically controlled man, is a deep pool of fear that Sheldon feels he cannot admit to. Sheldon is scared. He’s scared of moving in with Maisie and not having control; he’s scared that he’ll turn out like his father and hurt her; he’s scared of not being good enough. Even the title, Maisie says she loves me, suggests an inability to accept love or believe that someone can love him. It is this collection of fears that results in the breakdown of his relationships. Perhaps this is the true premise of the play, the idea that, all too often, men are not able to admit to their fears and instead have to hold them in so as not to appear weak. Bottled up feelings can only be released violently, when Sheldon snaps, voice raised, face contorted in anger, lit by a bright white spotlight, and his father bursts out. The audience bristles – Aula is shouting at one of them – and yet, even this burst of anger is measured and controlled: he is held in by the circle of light and quickly turns remorseful, apologetic.

In Maisie, Aula and Osbourne have created a deep and complex character that can only be barely approached in a few lines of a review. They highlight central problems inherent in society’s constructions of heteronormative masculinity, suggesting most powerfully the need for us to renegotiate our relationships with vulnerability. But at the end of the day, Maisie is about a deeply troubled man and his attempt to reconcile his past in order to move on with his future.

Maisie Says She Loves Me played from 1st-5th March at the end of the VAULT Festival that ran from 25th Jan – 5th March.  Find more information here.