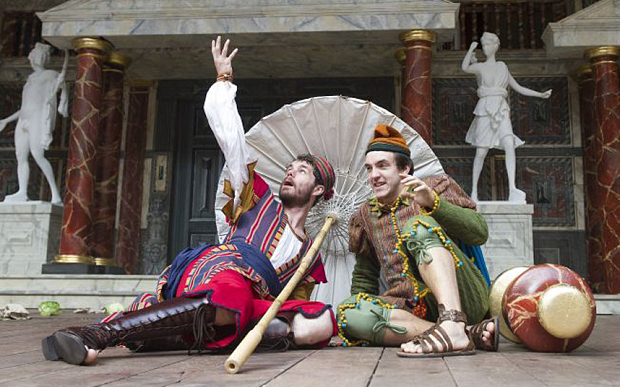 BECKY BAINBRIDGE reviews Shakespeare’s ‘Comedy of Errors’ at The Globe.

‘The Comedy of Errors’ is Shakespeare’s shortest play and is, ironically, a comedy I have always felt falls short of being forgivably implausible – the suspense of disbelief just can’t be stretched to such ludicrous lengths, surely?

This is a tale of two pairs of twin brothers, both named Antipholus and Dromio, who were separated from their siblings in a shipwreck twenty-five years earlier. Whilst one Antipholus suffers the bewilderment of being spurned by his wife and fellow citizens of Ephesus, his brother from the rival city of Syracuse delights in their generosity of wealth, and sexual favours. In an entertaining parallel amidst the maelstrom of mistaken identities, the two Dromios suffer the blows of their masters who are incredulous at their servants’ disobedience.

The Prelude to The Globe’s production of the play immediately establishes a tone of silliness, as one Dromio struggles to retrieve a pair of underpants from the rafters of the stage; the later and unintentional recovery of which produces a great roar of laughter from the audience. From the first scene onwards, the physicality of the troupe’s elastic performance engages the audience by maintaining a high energy throughout.

As a standing ‘groundling’, a sense of direct involvement with the action is generated due to both proximity to the stage and to the cast members, who step through the crowd in order to make their entries. I’m unconvinced that seated audience members would feel the same degree of inclusivity, or have the delight of catching the flashes of glee across the actors’ faces during especially comedic lines and interplay. Meanwhile at times, punchlines are missed and the dialogue drowned out by passing aeroplanes overhead. These exterior interferences recreate the duality of theatre in Shakespeare’s day: a dramatic reality versus an awareness of the process of the play itself.

As the plot unravels, Hattie Ladbury’s remarkable performance as the melodramatically irate Adriana, the highly-strung wife of Antipholus of Ephesus, punctuates the falling action in an amusing fashion. The clichéd doubling of extravagant costumes which exude the characters’ personalities, complemented by minute details, such as matching facial hair, adds to the play’s humour.

The two Dromios (Brodie Ross and Jamie Wilkes) maintain the vigour of physical comedy whilst injecting pathos into their roles. This counterbalances the insincerity of foolish characters with an underlying sentimentality.

Even the tediousness of the play’s exposition in which Egeon, father of the twins named Antipholus, delivers a long-winded monologue to set the scene, is quickly offset by the production’s overarching slapstick energy and clowning interludes.

As the confusion of identity ensues, under Blanche MacIntyre’s direction, the farcical fallout of the play is unabashedly ridiculous. An attempt to view this production as anything other than farfetched would, in itself, be absurd and would spoil the fun to be had by all.

For more information on ‘The Comedy of Errors’ and tickets, please click HERE