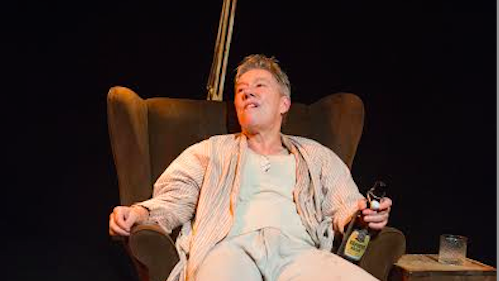 ‘Man to Man’ asks us if a Nazi and Snow White could ever be said to share a common ground. The comparison may seem ludicrous – even distasteful – but this riveting revival of Manfred Karge’s play has an inexhaustible ability to unite the seemingly irreconcilable. Dizzyingly ambitious, it is a play that synthesises verse and prose, realism and expressionism, man and woman, and well, finally, a Nazi officer and Snow White. 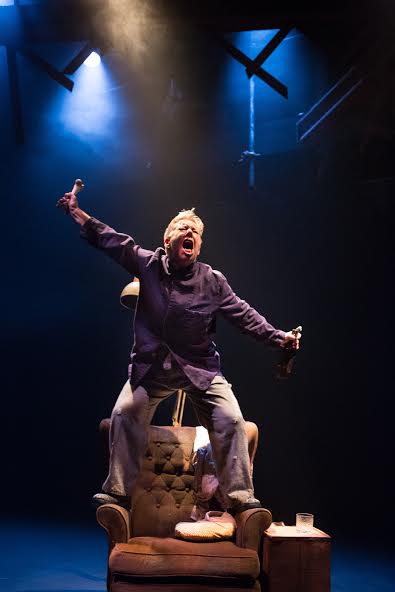 Karge’s play is grounded in the tumult of twentieth-century German history. Written in the repressive atmosphere of East Germany in 1982, the play has a broad scope; covering events from the rise of Nazism to the collapse of the GDR in 1989 (including a new scene, added especially by Karge for this production, depicting the fall of the Berlin Wall,). This is no Hans Fallada or John le Carré though. Political machinations and Cold War tensions are not to Karge’s taste. Instead, he centres our evening on the many hardships history serves up to the widowed Ella Gericke (Tricia Kelly), who from her armchair relates her early adolescent years, her experience under the Nazi regime and her struggle to survive, all in an energetic eighty-minute monologue.

Half-dressed and inebriated, her hand constantly fumbling amongst empty schnapps bottles, veteran performer Tricia Kelly oscillates with ease between the humorous and the horrific, often playing off the tension between the two. Ella, ‘halfway between Nazism and Communism’, lauds the Nazi regime for her trip to Norway – and the ‘beer’ and ‘pork’ – but minutes later Kelly’s voice is near breathless, overcome with apologetic sadness as she relays the horror of a Nazi prison camp, or tells the grotesque story of a Nazi needlessly shooting dead a pet rabbit for ‘treasonous transmissions’. Tall, nondescript wooden boards rise up behind her armchair and table, lingering darkness surrounds the stage, and it always feels as if her fragile, humdrum world is on the verge of being destroyed. 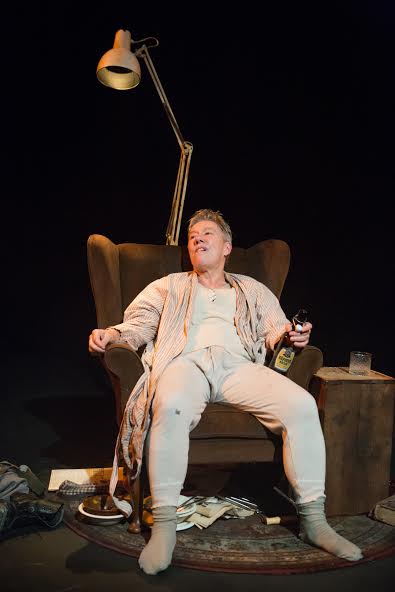 However Karge’s theatrical coup is in the play’s exploration of gender. Faced by the prospect of little income (the play begins with Germany still suffering mass unemployment), Ella assimilates the identity of her dead husband Max in an attempt to survive. She dresses like him (with pot-belly, overalls and greased-back hair) and, in the end, she thinks like him (proclaiming to Max’s workmates ‘Ich bin ein Deutsche Mann’). And Ella uses this sexual ambiguity to her advantage. As her dead husband, she becomes a Nazi officer in order to avoid mobilisation; then, when threatened with Russian occupation, she resumes the appearance of a woman so she might flee the front line. But Ella’s not the only one playing around with identity. We hear of struggling factories in East Germany smuggling in Turks dressed as women, and a spurious claim that Napoleon was, in fact, a woman. Flexible and unfixed, gender becomes something of a performance in ‘Man to Man’.

Yet though Ella’s sexual ambiguity may be her salvation, it is accompanied by a feeling of barrenness, as Karge makes Ella’s androgyny nightmarish. The prose of Anthony Vivis’s lively translation of the play is often punctuated by surrealism; at one moment, a spotlight shines on Ella as she begins a gaudy cabaret dance, and at a more lyrical point in the play, she clutches her chest and rolls around the floor, expressing her powerful desire for a child. Though it could be said that the narrative is sometimes frustrated rather than enhanced by the play’s recourse to expressionism and poetry, Ella’s story is so unique that it clearly must be told in a unique way. The production’s expressionism also serves to disorientate the audience, and in doing so it very effectively renders Ella’s increasingly confused situation, caught between her male and female identities.

This confusion is encapsulated in the production’s final vignette, one of the most powerful of Tilly Branson’s directorial flourishes. After the sounds of the collapse of the Berlin Wall subside, Ella marches to a terrifying thumping noise – but the audience remain transfixed by her feet. On one foot she wears the black walking shoe of a Nazi officer; on her other foot she wears Snow White’s red fairytale slipper. In the final, climatic moment of the play, man and woman are interminable. A moment of joy perhaps, but looking into the mirror on the wall – just before she asks it ‘who is the fairest of them all’ – makes Ella baulk.

At its most simplistic, ‘Man to Man’ is about a woman – and perhaps a whole generation – lost to the precarious fortunes of history. But it is also an intelligent and moving work about the importance of identity and personal definition at a time when the rest of the world was going awry.