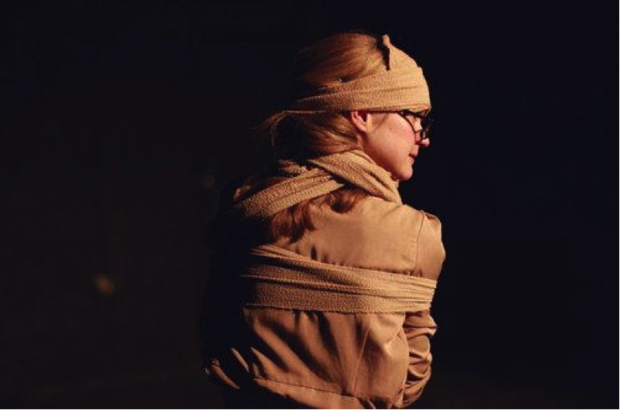 You would be forgiven for thinking you’d walked into the wrong venue having arrived at the circular cabaret room at the lavish Brasserie Zedel in Soho and been presented with a paper leaflet bearing a coat of arms and the words ‘St Stephen’s Alumni Supper’. Produced by Solar Productions, the premise of MUMMY is this: we, the audience are former students of a fictitious school at which comedienne Amy Gwilliam plays the Guest of Honour, Prof. Elizabeth Niccoll, returning to her secondary school to give a talk on her first book ‘MUMMY or the Art of Saying Goodbye’. Now a celebrated anthropology professor, the leaflet even features Elizabeth’s faux-biography and list of academic interests.

As the play begins, we are asked to stand and sing a hymn to which few people know the words resulting in some comedic babbling and awkwardness. It quickly transpires that this is the place Elizabeth, as a 16 year old, learned of the news of her mother’s sudden death. Specialising in the study of Ancient Egyptians, it is therefore fitting that the lecture should be about both their mourning rituals and her own. Inspired by the death of the performer’s own mother (TV comedy director Liddy Oldroyd), this semi-autobiographical one woman show is a lucid evaluation of grief and its suppression.

Amy Gwilliam’s character is vastly idiosyncratic, and leaves many audience members laughing hysterically. Her mannerisms are quirky and the character is completely believable. For someone who studies human behaviour, she is remarkably alien. Her lecture is punctuated by moments where she seems to return to her teenage years and the trauma that shaped both her life and, as the double entendre of the play so blatantly points out, her career. Returning to St Stephen’s is obviously the catalyst for a monumental meltdown that takes place on stage before our eyes. Her inability to have closure over her mother’s passing is overt when she says ‘I suppose it’s the way we do it in Britain. Women don’t gather and weep for days; we don’t anoint the dead and bind them in swaddling; we don’t sit around a fire roasting rabbits or dance until we’re on the floor. We buy a sympathy card…. and send it. Or take round lasagne. I fucking hate lasagne.’ She confesses to us as one would to a therapist, ‘I am a fraud’.

The nature of the cathartic experience Niccoll experiences means that MUMMY is an extremely disjointed performance, made even more bizarre by the setting. The play jumps from bizarre situation to downright off-the-wall circumstance. Halfway through the play, Niccoll plucks two unsuspecting members of the audience to engage in an interactive mummification where one of them, the mourner, wraps the other, the deceased from head to toe in bandages. Then, even more strangely, Niccoll asks them to bind her, covering even her eyes and mouth. Other weird highlights include a rap about death and a squeaky rendition of Gloria Gaynor’s ‘I Will Always Love You’ atop a grand piano. The play has no constant thread and sometimes loses itself in its own theatrics, becoming quite funny but too erratic to be moving.

The most touching moments of the performance come when it is unclear whose memories we are listening in on: actor or character. They remember fragments of Mummy; she wore a purple dress, clumpy eyeliner and orange lipstick. She was embarrassing, grew cannabis in the garden, drank too much and hugged her daughter too hard. As she removes her bandages, she also undoes her own emotional constraints, asking a series of poignant confessions and questions including ‘Sometimes I don’t wear knickers to lectures’ and ‘Did you enjoy being a Mummy?’ No time is lost on trite expressions of loss. Instead, the peculiar facts and anecdotes are what give real depth to the performance and make it an unorthodox and belated funeral procession for the mother behind the play.

Mummy ran at The Crazy Coqs from 23rd-25th May. Find more info here.