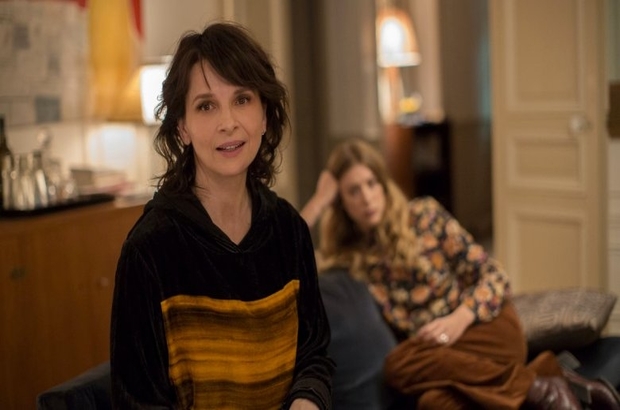 Concerned primarily with questions of the transition of media into the digital age, Non-Fiction (2019) is a film which attempts to establish itself as a portrait of modern times, attuned to the current zeitgeist of technological anxiety. However, an inherent contradiction is found in the way director Olivier Assayas chooses to present us with his view of the modern age. Despite marketing itself as a witty, farcical comedy of bored couples engaged in a zig-zagging pattern of affairs that would feel more at home in a Woody Allen film, Non-Fiction predominantly consists of conversations between a group of upper-middle class intelligentsia types; all of whom seem to be almost completely sealed off from the world around them. The farcical cheating simply ends up serving as background noise; a loosely contrived plot to string the series of conversations together.

Vincent Macaigne plays Léonard Spiegel, a bumbling, diffident novelist whose sole talent seems to lie in writing thinly veiled fictionalisations of his life; ‘auto-fiction’, as he calls it. Despite his girlfriend Valérie (a terrifically funny Nora Hamzawi) being a PR savvy political aide who owns at least five devices and is constantly in need of a charger, Léonard has managed to remain out of touch, and is proud of it, steering so clear of modern technology that he can barely grasp the concept of social media. This may seem like an ultimately harmless character quirk at first, but it soon becomes evident that his digital illiteracy is, at least partly, a way for him to avoid all critical discourse surrounding his writing, specifically in regards to the way his ‘auto-fiction’ affects those who he writes about. Interesting, nuanced issues like these are brought up throughout Non-Fiction, and had Assayas actually engaged with them on a profound level (rather than seemingly feeling satisfied by simply making reference to them), then the film might actually have made for an interesting look at the publishing industry trying to find its feet in the modern age. Instead what we are left with is something wholly disappointing in its lack of depth.

A more egregious example of this is found in the character of Alain (Guillaume Canet – brilliant as ever). The head of an historic company which publishes Léonard’s books, Alain is plagued throughout the film by the idea of the digital transition, and whether or not it’s something he should attempt to embrace in order to keep his company alive. This is discussed at length most prominently with Laure (Christa Théret), a much younger digital media expert who he has hired to consult on the direction the publishing house should take. Their conversations are a constant repeat of the same arguments and ideas – the place of criticism in a cultural economy increasingly driven by algorithms, and the rise of e-books and audio books in place of print publishing, to name a couple. Again, these are interesting ideas, but Assayas’ contentment to simply reference them rather than engage with or explore them – as though the reference is in itself an exploration – makes the film an unsatisfying watch.

Perhaps needless to say when writing about a film which is so firmly centred around the hermetically sealed lives of bourgeois culturati, Laure’s character is one of the most stereotypical depictions of the social media focused millennial that I have come across thus far. Her suggestions to Alain include pivoting away from print publishing entirely, and creating books consisting solely of an author’s tweets and texts, claiming that it is these things which will save the publishing industry. This would be the most flagrantly clichéd part of her depiction, were it not for the fact that Alain is cheating on his wife Selena (an as always perfectly magnetic Juliette Binoche), devout advocate of traditional media and critic of digital alternatives, with the young Laure. This is just an impenitently blatant way to narratively suggest the cultural establishment’s flirtation with the digital age. Indeed, the film’s treatment of women’s bodies as a whole makes for a somewhat uncomfortable viewing. Non-Fiction may have been marketed as a witty, sexy comedy, but apparently all that means to Assayas is having a few gratuitous shots of Juliette Binoche and Christa Théret naked in bed.

The aspects of comedy are, in a way, what makes this film the most disappointing. Not disappointing because the jokes aren’t funny – they are; so much so that I feel special mention must go to the running gag (pardon the pun) about a blowjob during a screening of Haneke’s The White Ribbon – but disappointing because they give glimpses of the comedy that could’ve been. Non-Fiction is a film consisting of unbearably didactic deliberations and discussions interspersed with moments of truly funny comedy, rather than the other way around, and it is this that makes the film feel most uneven. Indeed, any sense of tension or urgency created throughout Non-Fiction (whether that be a result of fundamental disagreements about media, the adultery, or anything else) is never maintained for long, and rarely resolved in a way that feels natural or complete. Everything is shrugged off without consequence; the mental labour of introspection and self-confrontation that would have lent the characters and the film some much needed emotional honesty is glimpsed only rarely before being swept away again. All discussions of the future of publishing remain purely theoretical, disrupting nobody’s routine or lifestyle. In fact, the central quartet of characters rarely, if ever, come into contact with outsiders who have a substantial impact on them. Their lives consist of dinner and cocktail parties, literary conferences, lunches at historic cafés, and little else. Overall, Non-Fiction is a film which attempts to engage with the reality of the modern age, yet insists on remaining within the curated boundaries of a lifestyle known to few, and so remains hopelessly out of touch.

‘Non-Fiction’ was released in the UK on 18 October.