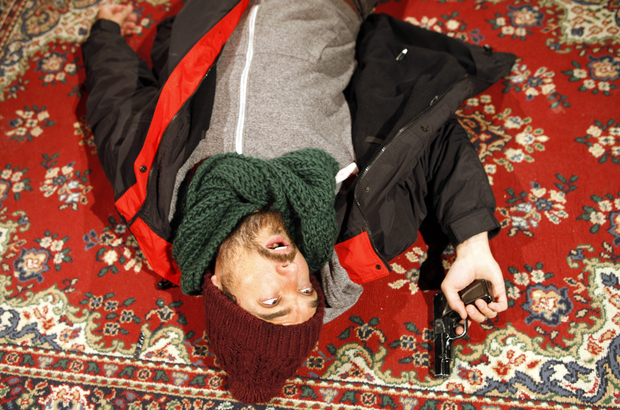 DANIEL LUBIN reviews The Understudy at the Canal Cafe Theatre.

“I’m not bitter”, Harry insists bitterly. Bitterness permeates Theresa Rebeck’s The Understudy: bitterness towards actors who earn too much, towards the commercialisation of theatre, towards ex-lovers, towards the general unfairness of life. This comedic insight into the theatrical world brilliantly brings the stage to the stage, following the rehearsal process of a long-lost story by Kafka being performed on Broadway, and acutely commenting on the invasion of cinema and showbiz into the theatrical world.

Unsuccessful actor Harry (Samuel John) works his way into understudying his rival Jake (Leonard Sillevis) in a production stage-managed by his ex-fiancé Roxanne (Emma Taylor). The audience is presented with two clichéd manifestations of the actor: one goofy, slightly pathetic small-timer, one typically obnoxious leather-clad action-star, both with similarly inflated egos. The play opens to Harry playfully addressing the audience in a conversational monologue, before receiving abuse from both Roxanne and Jake over his infiltration of the cast. They soon find harmony as Harry brings a fresh and revitalising interpretation to the script, and after reciprocated compliments the two actors sit on the floor, eating prop bananas together. After its initial highly-comedic scenes, the play settles down into acute observation of the nature of the theatrical world.

The play is defined by its rehearsal room, on-stage setting — a new turn on a relatively well-trodden, yet fabulously-productive theatrical device. Laura, the unseen (and unreliable) tech-operator, allows for dynamic lighting as she throws the wrong cues on the wrong scenes, pitching the space into blackout or abruptly bringing up the houselights. This elegantly transports the audience into the unoccupied seats the actors are supposedly performing to. At another point cued music comes on following the script of the play-within-the-play to give a humorously haunting edge to an argument between Harry and Jake.

The set and set-up allows all three characters a constant presence as whoever’s offstage can hear everything in the rehearsal space through the loudspeaker, something they all comically forget at various points. But most interestingly, the Kafka script plays an integral role. The first scene they rehearse functions as a brutally honest metaphor for Roxanne and Harry’s relationship; a later scene conveniently discusses the understudy’s place in theatre as Jake’s character tells Harry ‘nobody will speak to you, you are nothing’. In a play saturated with comedy, the play-within-a-play is masterfully used as an agent for throwing truth out into the open with all of Kafka’s stylised and forceful theatrics, conveying a multi-layered and otherwise unachievable sincerity.

A rigid hierarchy is depicted, with Harry at the bottom, Jake vastly far above him, and far superior to them both, the aloof and elusive movie kingpin Bruce who is the star of the production. Actors seem to be worth only as much as they gross: where Jake brings in millions of dollars, Bruce brings in tens of millions. A debate about the distinctions between commercial theatre and art of substance is honed in on when Harry discusses his character’s comic splutter, a move that he identifies as a reliable crowd-pleaser – he recognises the audience will laugh, but will it be a ‘good laugh’? As it turns out, the show was always merely a vehicle to put Bruce on the stage, rather than anything artistically more high-minded, and we see how money trumps art. When Harry at one point calls Bruce’s acting ‘terrible’, Jake responds almost fearfully: ‘You know you can’t say that right?’ The world of showbiz becomes a Kafkaesque establishment of unspoken rules and oppressive, unfair, and inexplicable systems.

The Understudy is held up by the obvious rapport between the three cast members, shown in their organic delivery of the hilarious dialogue, as well as in their deft communication of the more poignant scenes. But most importantly, the play paints a picture of the commercialisation and invasion of theatre by the glamour of cinema, whilst simultaneously celebrating and demonstrating the artistic potential of theatre and its portrayal of authentic relationships. Its commentary on the appearance of big big-screen names on the stage, a phenomenon we see yearly at the major playhouses, is contrastingly made through the depiction of the unexpectedly talented Harry, the lowliest form of backstage life – the overlooked understudy — an appeal to the authentic, the human, and the little things in life, that it’s hard not to fall for.

The Understudy is playing from 21st Feb – 11th March at the Canal Cafe Theatre. Find tickets and more information here.