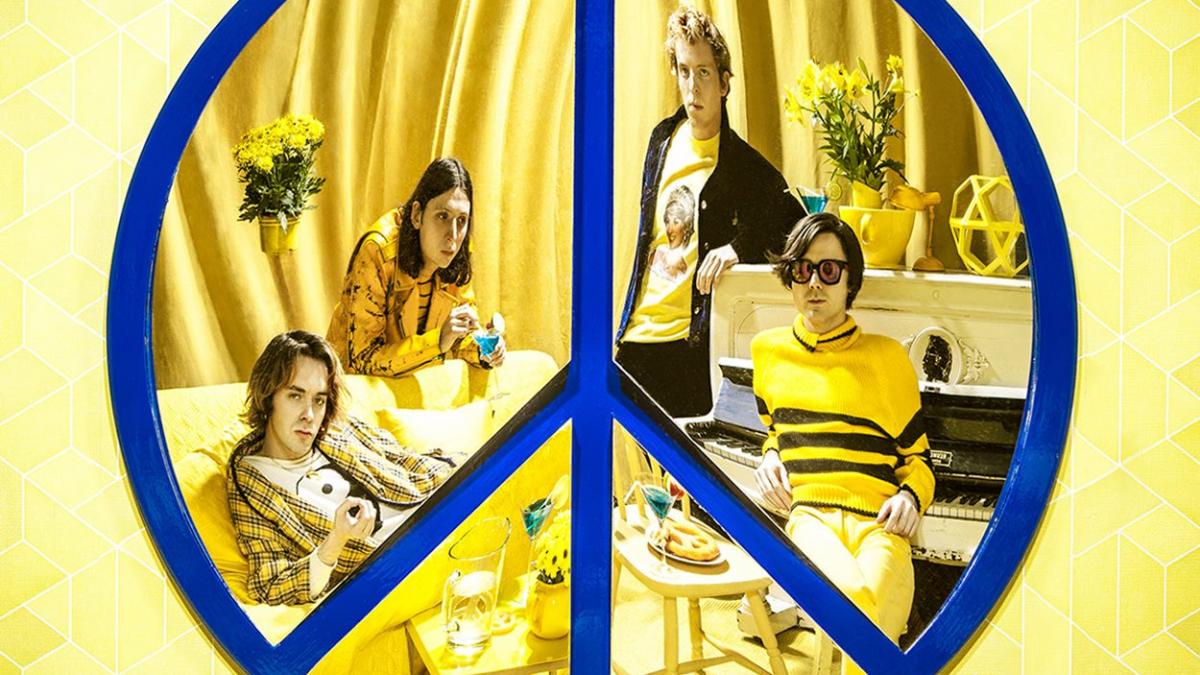 Amy Gwinnett takes us through the new album by Peace, Happy People.

Peace are at an interesting place in the musical landscape right now. Rock/indie/guitar music is, as anyone with a passing knowledge of the UK Top 40 will tell you, currently stuck down some dark dank pit with only Chris Martin managing to claw his way out by the very tips of his perfectly manicured fingernails. In terms of popular awareness, Peace are down there somewhere, amongst the bones of Viva Brother and their ill-fated peers. And yet, they have the kind of dedicated teenage fan base that the Libertines boasted in their heyday: they have graced the front cover of NME, and Happy People, their second album, is said to be on its way to the top 5 of the album chart. They are the big, fur coat clad fish in the small pond that is the current indie scene.

Will Happy People change that? The album begins with a tropical sounding splurge of noise that settles into the inauspicious opening track ‘O You’, which aims for the anthemic but sadly comes off sounding rather wet. This is rectified by the one-two of ‘Gen Strange’ and the utterly infectious ‘Lost On Me’ (which boasts perhaps the best of Peace’s often wonderful music videos). The former has clear shades of Primal Scream, while the latter is straight up indie pop, infinitely danceable with the refrain “You’re chemically, so heavenly” guaranteed to burrow down into your head for days.

Two other singles, ‘Money’ and ‘I’m A Girl’, are further album highlights, and contain some of the more discerning and relevant lyrics of the album. ‘Money’ tackles, perhaps slightly heavy-handedly, the problems of consumerism and a culture obsessed with wealth with a Prince-style funkiness and brilliant breakdown where (not for the only time on this album) singer Harrison Koisser drifts towards rap. ‘I’m A Girl’ is a takedown of traditional masculinity – refreshing from a band who are certainly not a world away from – whisper it – laddishness, and is one of the most musically adventurous tracks on the album. If it strays into slightly patronising tones at times (the lyric “if we’re living in a man’s world, I’m a girl” – gee guys, thanks for the support) it really doesn’t seem deliberate.

Peace proved they could do a slow tempo track with aplomb on their debut album, In Love (‘California Daze’ was a glorious, stately track), They have not transferred this skill to their current LP, however. The sixth-form style acoustic fumblings of ‘Someday’ really impede the album’s momentum, and Harrison’s usually on point vocals stray into unfortunate warbling. Similarly, whatever they were going for with ‘Under The Moon’, they missed. It’s an odd song, seemingly the product of some misguided 50s retromania. It would make a disappointing b-side, let alone an album track.

Luckily, album closer ‘World Pleasure’ serves as a reminder of everything there is to love about Peace. At a healthy six minutes long the track is reminiscent of pop behemoth ‘Uptown Funk’, and is just as good. The guitar solo is brilliant, and it serves as a nod towards the onstage wig outs the band sometimes indulge in. Similarly, the extended outro again has hints of Primal Scream and the Madchester scene in the best possible way. The album has its weak points, but when it’s good it’s really good, and should surely be enough to pull them out of the indie ghetto.

Happy People was released by Columbia on 9th February.