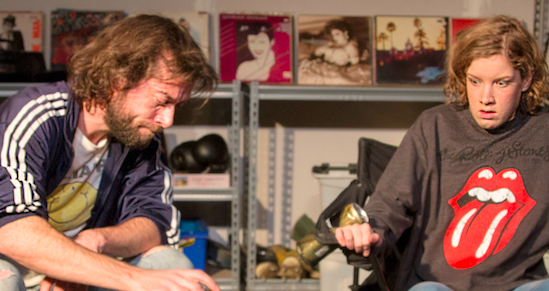 When the audience settled into their seats for the debut production of ‘Cans’ it immediately became apparent how special Theatre503 is. The venue provides a cultural platform for first-time or aspiring playwrights and I couldn’t help but notice how it holds a certain affinity with SAVAGE. Stuart Slade wrote his first play 18 months ago and worked with Theatre503 to kick-start a four-week run (4-29th Nov). After watching Slade’s new play it is not surprising that The Guardian has named Theatre503 as, ‘Arguably the most important theatre in Britain today’. ‘Cans’ is somehow charming, crude, dark, poignant and extremely funny all at the same time and Slade, in my eyes, is definitely one to watch.

Jen’s dad, a talk show host and national-treasure, second only to the Queen, has committed suicide after a series of serious sex-abuse allegations. The plot focuses on Jen’s relationship with her outspoken, cider-drinking Uncle Len, who is desperate to cheer her up and help her move on in anyway he can. They hide from the hostile scrutiny of the world in a decrepit garage: drowning mice, talking crap, laughing, crying, sharing painful secrets and appalling jokes. Amidst the downing of cans, together they try to figure out whether either of them can build any kind of future.

From the onset ‘Jen and Len’ are close, but with a rather unusual, familiar relationship. He is the fun, happy-go-lucky uncle and she is the sarcastic, surly niece in and out of university. Graham O’Mara and Jennifer Clement take on these rolls with gumption. Initially their chemistry is a little flat. It takes a while before they stop acting in isolation, and really begin to play off one another. Yet by the end, a nuanced and complex relationship is built between the two grief-stricken characters. O’Mara has an incredible physicality and commands the space on the stage effectively, convincingly flipping between the drunken, garrulous ‘Len’ and a heartbroken underachiever. Clement, on the other hand, constantly maintains the hint of trauma underneath those witty, sharp rebuttals to Len’s incessant joking.

The first couple of scenes feel slightly repetitive, yet the script is very funny – impressively so for such an inexperienced playwright. The dialogue conveys the transitory nature of black comedy, and brings Slade’s script to the foreground of the production. The actors succeed in playing up to its humour, and repeatedly have the audience in stitches. The comic moves are tidy and the cohesive motifs are slick; such as their ‘thing’ of drinking cans, and Len’s adjective ‘Auschwitzy’- later echoed by Jen sarcastically joking about Hitler’s diary: ‘woke up, tennis with Goering, chicken chimichanga lunch, gassed a million Jews, LOL’. A particularly comedic moment occurs when Jen tells her uncle about her grandmother moving in to help with her mother’s depression. Len emphatically responds with ‘Fuck offf- that’s like getting a Nosferatu to nurse a ward of haemophiliacs’.

Throughout the play Jen’s father is hauntingly present. The audience is very conscious of him as Jen and Len share their stories and dissect both the greatest and darkest parts of his personality. At one point when Len is trying on his jumper Jen stops short, moved by how much Len suddenly looks like him. The immense fame of the deceased is heavily contrasted with the introverted and private moments between Jen and Len, as they hang out in a dingy garage.

The pace of the play makes quick and often abrupt shifts: it slows with moments of emotional awkwardness, or races with a heated argument. This fluctuation is often unnerving, and emphasises the paradox of the light humour grounded in such a dark, devastating backdrop.

Overall, ‘Cans’ is both insightful and thought-provoking. The audience is confronted with the underdogs: the struggling, surviving family. Even though the media has brutally torn the former star to shreds, his relations – painfully and desperately – try to hold onto their perception of a kind, loving father and brother.