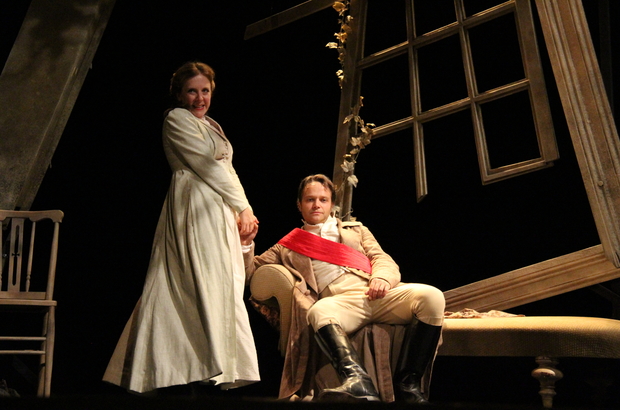 Jermyn Street Theatre’s Pride and Prejudice, playing until the 21st December, is what I imagine a fair representation of the book to be (full disclosure: I’ve never managed to finish Austen’s novel itself). I couldn’t quite hear the pages turning, but I could envisage a playwright’s copy of the text, full of post-its and frantic underlining, translated into the play. I could sense – perhaps too easily – when the playwright had directly transposed an important speech from the book, and when she skipped the stuff she found dull. This makes the script a kind of patchwork of the original text. The best bits are kept in, and the rest is dropped on our whistle-stop tour of a pretty complicated and lengthy book. Though I only had a few problems keeping up with the plot on stage, I knew that I would quickly be lost if I blinked too much.

That withstanding, I did enjoy the story, despite the adaptation being rather unforgiving to an audience who might not know the plot. I fell in love with Mr Darcy (despite his pride!), disliked Mr Bingley, and only wished the best for Elizabeth. I could only wish the performance had given me a little longer to get to know the characters.

Criticisms of pace aside, there is no doubt that this is an impressive production. Two actors, Joannah Tincey and Nick Underwood, play 21 characters in all. Despite an unconvincing start – which mostly comprised of Underwood being the butt of ‘he’s a man playing a woman!’ jokes – the performances turned into stellar, vibrant creations. It was a joy to watch the characters of a book being passed around the stage, like masks temporarily worn. Although in some ways, despite the piece’s satire of 19th Century English courting culture, this production largely left the text’s potentially more subversive aspects alone.

Perhaps, again, this is a problem of pace. I felt at times as if I was ticking off a Pride and Prejudice checklist. I felt like a teenager skipping through all that boring gender and satire and context stuff, so that I might reach the final kissing scene more quickly. I wasn’t given the chance to understand the nuance of Austen’s writing. Though I could be told just to go and read the book if I really cared that much about all this stuff, the play did feel a little like ‘Jane-Austen-lite’ for fans of Jane Austen who want to relive Pride and Prejudice in the company of other people whom hold similar affection for it. The play very nearly stood on its own two feet, but I did feel like the build-ups to the jokes told on stage were found almost exclusively in the book.

The fast pace of the play is one of the production’s most exciting and crippling aspects. At times I felt whisked away in the drama, and at others I felt lost in its frantic speed. With this in mind, I would recommend the production to Austen fans, but would ask those not acquainted with Jane Austen’s work to go and read Pride and Prejudice before seeing the play.