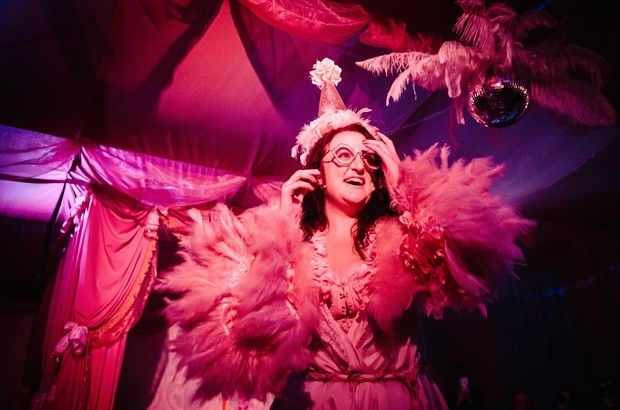 When entering the musty dungeons of the Vaults Theatre, one might easily feel oneself transported into the decadent Vienna of Arthur Schnitzler’s Dream Story. As soon as the spectator sets foot over the threshold into the underbelly of bustling Waterloo station, she is encircled by luring creatures in black and red veils, pressing masks into her hand and leading her to a decadent feast filled with jugglers, jesters, and acrobats. After a few moments of fin de siècle bliss, however, the spectator is bound to travel even further back in history, or, indeed, into the timeless realms of myth and archetype. On a balcony above the demonic minstrels, dangling from aerial silk strings to the tact of Shostakovich’s Valse n. 2, the Drag-King-Evil-Prince of the enchanted kingdom reveals himself, boasting, Bluebeard-like, of his femicidal attainments and sending the audience, his subjects, out to saunter among the magical creatures of his empire.

Shotgun Carousel presents Red Palace, directed by Cecile Lowenthal, an interactive theatre and cabaret-experience (first drink inclusive) leading right into the heart of the Brothers’ Grimm fairy tale world, suspended somewhere between medievalism, 19th century romanticism and the opulent doomsday-ennui of the Roaring Twenties. This eclectic assemblage of embroidered ball dresses, art nouveau furniture and gothic weirdness is truly overwhelming. Every single one of the many rooms the either hopelessly lost or dionysianly inspired – that is inebriated – spectator visits while journeying through the magical kingdom bursts with details of terror and delight. The concept of radically removing any division between stage and audience is the most captivating aspect of the spectacle. Theatre becomes a collective experience proper, where the illusion created by set and costumes is constantly put into question and subverted. At its strongest moments, the show is a theatre of objects; surrounded by weird and wonderful artefacts of no apparent use, materials, textures and colours unhinge their inherent narrative power, quite literally conjuring up images of all the monstrous fears and passions the Brothers Grimm gathered and put into text in the forests of their native Hessia.

But, alas, then the humans come. And with them a whole bunch of tired clichés and rather uninspired plotlines. Snow-White, whose slumber party we attend, lip-syncs Madonna, Gretel strips in a Kit-Kat-Club inspired Gingerbread-House, and Baba Yaga, who found her ways from her chicken-legged hut into the theatre, wags her Tarot cards into the spectator’s (or should we say: visitors’?) already rather heated faces. Whilst every one of the delightfully robed creatures is entertaining, be it the Fetish-Gear-Big-Bad-Wolf or the Steampunk-Prince-Charming, the narrative glimpses they establish are both disconnected and don’t add anything to the experience. On the contrary, the play is trapped between two modes of theatre without being able to find the right balance. On the one hand, the spectator is confronted with a space of absolute freedom, generated by the lack of any division between stage and auditorium, the possibility of free movement through the theatre space, and the plethora of strange objects and rooms inviting wild associations. On the other hand, the narrative aspects counteract this freedom, leading up to a ridiculous finale, trivialisations of feminism and revolutionary politics and, maybe worst of all, questionable fight-scene-choreography included.

The Green Fairy and other potations might establish a certain tolerance for the show’s wiggling between inspiration and gimmick, and Shotgun Carousel can assuredly pride itself on having created a ravishing backdrop for a night out. It is also worth mentioning that the cast is made up of entirely female-identifying and nonbinary performers. It would have been truly magical, however, if the play decided to be more than a mere backdrop and did justice to its potential by allowing the spectator to lose themselves in the thicket of associations evoked by this Gothic universe. Sometimes, it seems, breadcrumbs do the job of navigation better than pebbles.