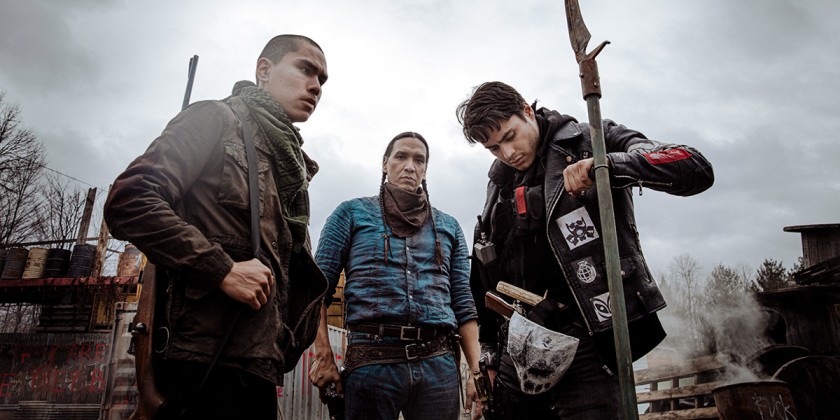 Zombies, it feels like, are a bit overdone at this point. We’ve learnt our lessons from Night of The Living Dead, had our fun with Shaun of The Dead, and got bored after season four of The Walking Dead. Have we not exhausted this sub-genre by now? Thankfully, writer-director Jeff Barnaby proves that we have not, with the thrilling and politically subversive Blood Quantum (2019).

In Blood Quantum, Barnaby demonstrates that a film can be both thought-provoking and profound, whilst still following the major beats of most zombie narratives. In the film, a highly infectious virus transforms the majority of the human population into grotesque corpses with a hunger for flesh. No points for guessing how the virus is transmitted… Barnaby’s story follows a group of survivors during and after this outbreak’s decimation of global society. Blood Quantum diverges from traditional tropes in a socially relevant and exciting way, giving natural immunity to the Indigenous First Nations people of the Quebecois Red Crow Indian Reservation.

Barnaby, himself Mi’kmaqi and native to Quebec, previously wrote and directed Rhymes for Young Ghouls in 2013, a drama about education and the drug trade in First Nations communities. Barnaby’s focus on stories centered within Indigenous communities continues in Blood Quantum. We are introduced to both the Reservation’s landscape and the film’s key players in the fast-paced, and at times disgusting, opening third of the film, where we witness the zombie virus taking over society. Our protagonist Joseph (Forrest Goodluck) is a bright teenager who has recently found out his white girlfriend Charlie (Olivia Scriven) is pregnant. Joseph’s world-weary father, Shamu (Kent McQuaid), is the Reservation’s police chief. Lysol (Kiowa Gordon), Joseph’s half-brother, is tired of seeing the structural injustices of society fueling poverty and alcoholism among his friends, which has instilled in him a strong personal hatred for white people. Having set the scene, Barnaby’s script then cuts to six months later in the outbreak, dropping us in a zombie-filled world where the white majority population are begging to gain access to the Reservation safe-zone. Within the Reservation, tension is high and conflict arises about whether white people should be let in or left outside to fend for themselves, just as our contemporary society often fails to provide BAME populations with equal access to resources in times of crisis, as seen most recently in the Coronavirus pandemic. Barnaby’s social commentary is by far the most interesting part of Blood Quantum. What happens when a historically oppressed and abused people become the only ones who can provide their historical tormentors with safety?

What does happen, at least in the context of the film, is a gory and entertaining roller coaster. The relative peace and safety within the Reservation quickly crumbles when an infected white woman lies her way into the barricaded Reservation. Long resentful Lysol seizes this opportunity to enact his revenge on the white refugee population who have sought shelter with the immune Indigenous peoples. Joseph, Shamu and others team up to stop him and avoid a role-reversed repetition of past colonial atrocities. Smart parallels are drawn between Lysol leaving the refugees to be killed by the zombie virus and history’s colonial settlers importing smallpox, which obliterated huge portions of Indigenous populations in the 18th century. Barnaby was set on this political statement from the start, telling The Los Angeles Times that it’s ‘one of the benefits of being a native film director: You have so much history to riff on’.

Right in the middle of this horrorscape, Barnaby places the secondary plot of Charlie and her unborn child. Charlie, nearing the end of her pregnancy, is in dire need of a safe place to give birth, and is plagued by fears about the chances of survival of her mixed-race child. It is uncertain whether the baby will be born immune like its father, Joseph, or vulnerable like her. Charlie’s heavily pregnant state creates some of the film’s tensest scenes, as Joseph and the rest of the group attempt to save her from the overrun Reservation. As the situation becomes increasingly dire Barnaby treats us to some excellent and mostly practical gory effects, with fake blood splattering across the screen in every direction. He’s not shy about killing off central characters, dropping key narrative players left and right to create a truly threatening atmosphere where the whole cast feels vulnerable. Barnaby also contrasts his horror with beauty, interspersing his film with stylized hand-drawn animations which compliment the narrative in a creative way, illustrating the hope all characters share for a brighter future.

The central question of Blood Quantum is not only whether our central characters can beat the zombies, but how this brighter future can be achieved. Barnaby illustrates the characters’ struggle to choose between revenge and altruism – in spite of their historical grievances. Blood Quantum is a zombie film where the main threat is not the zombies, but humanity itself. Barnaby’s masterstroke is in using the zombie genre as a platform to explore the real world inequality and xenophobia which heavily affect Indigenous populations across the globe.

The main downfall of the film comes through its overly graphic scenes, whose over the top violence often detracts from the overall political message of the film about the damaging effects of segregation and xenophobia. A mother consuming her child within the first ten minutes of the film feels excessively grotesque rather than just gory fun, and one specific zombie bite occurs in a needlessly sexual and disgusting way. The characters similarly have their faults. Lysol’s aggressive attempts at revenge against racial oppressors have strong parallels with Black Panther’s Erik Killmonger, but his sadistic methods and lack of persuasive speech make him a much less respectable villain, and very hard to sympathise with. The script is the main issue with Blood Quantum; mediocre writing lets down the characters with clunky, unrealistic dialogue. This leads to moments of forced exposition about events and locations which take the viewer out of the scene, and abandonment of some originally promising narrative arcs mid-way through the film.

Overall, Blood Quantum is a real treat and a fun, thoughtful addition to the horror genre. The Red Crow Reservation’s setting and characters provide one of the most exciting, blood-soaked commentaries on race politics I have ever seen. Blood Quantum received much praise for its social commentary, especially in the period of heightened xenophobia following the start of the COVID-19 pandemic. Barnaby’s next project, a cosmic horror film which looks at Indigenous storytelling tropes, will be his third feature film based on First Nations people and will certainly be one to look out for.