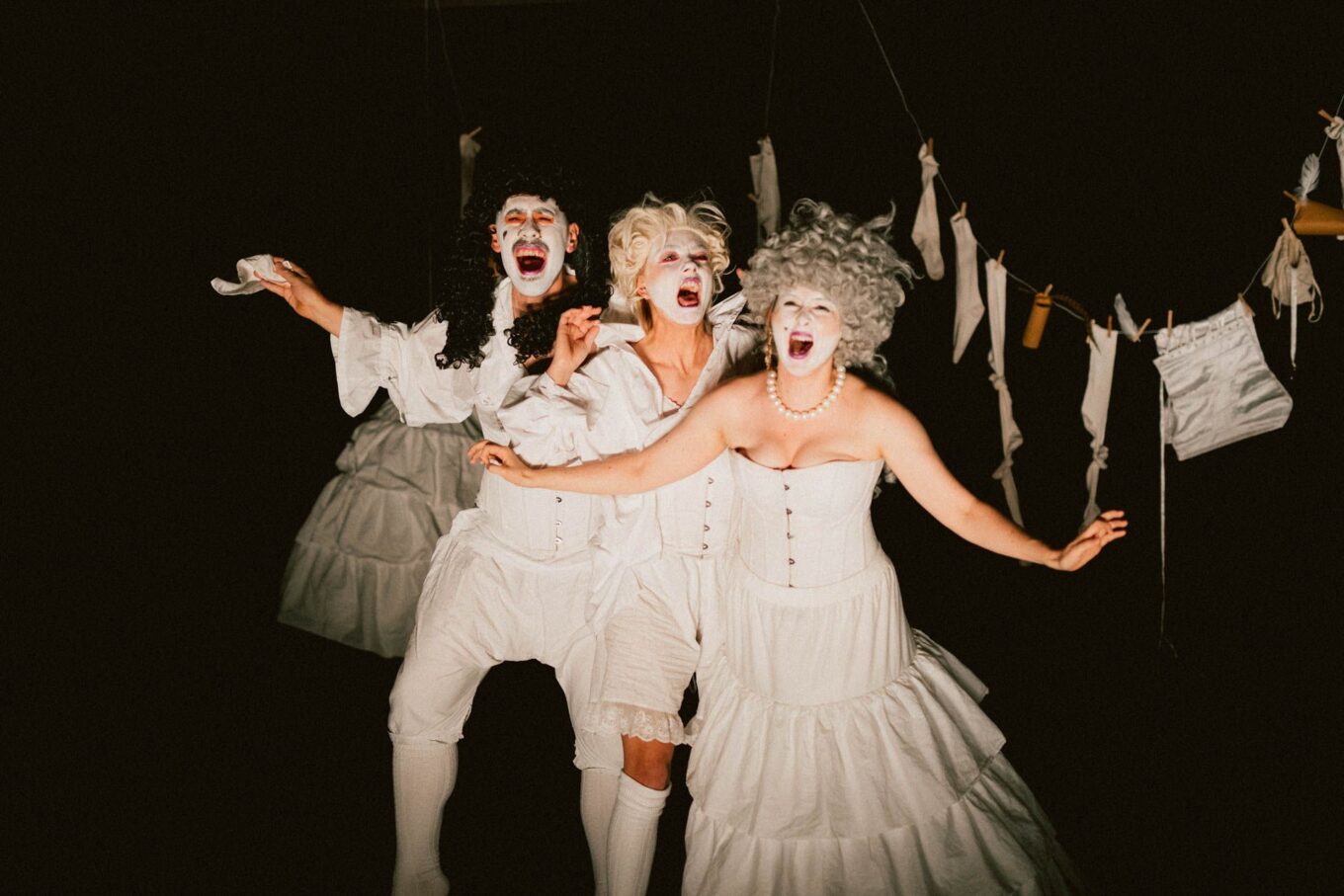 Strung on washing lines around the Pleasance Theatre are socks, wigs, and bandages; the seedy nature of the play’s content quite literally dangles over the audience’s head throughout. The immersive nature of this show is not limited to set design – the intimate space and interaction with the audience invites the crowd into the rude, hilarious, and often revolting world of sevententh century Northern England.

Dirty Corset follows an acting troupe staging a play about characters decidedly more proper than themselves. The narrative therefore exposes the stark contrast between the modern perception of life in the past – one of politeness and modesty – and the depraved and disgusting truth. Perhaps it is a message about the inherent falsities of theatre: its many layers of characterisation create a maze of performance, insincerity, and exaggeration, that both the characters and the audience must attempt to untangle and make sense of.

The costuming is a particular highlight of the play, for it brilliantly encapsulates the sweaty, grimy, and sleazy nature of the time period. It also gives the cast the means to differentiate between their ‘actor’ selves and their performer roles in this play within a play, without such transitions becoming confusing. A number of wigs are used, thrown on and off to indicate shifting roles, but also suggesting an innately theatrical element to life at the time. Make-up consists of smeared foundation in ghostly pale shades, and the outfits include various combinations of corsets, dresses, skirts, trousers, and flowy shirts, all in the same shade of white.

Through the interchangeable nature of the costumes, gender identity and expression are explored, both in the context of the play’s setting and how this might resonate with a 21st century audience. During the Restoration period, women were allowed to perform on stage for the first time in England, often being given the parts of men. This allowed women to dress in a more androgynous and potentially liberating way than society would have allowed outside of the theatre. Fashion and costume are shown to be something transformative; Susanna Scott’s character plays ‘the Rake’, and wears a far more traditionally masculine outfit than her fellow actress, played by Chloe Darke, who must wear a restrictive corset and skirt.

Each character has a distinct issue that they grapple with when they are not performing; my one criticism of the production was perhaps the lack of subtlety or nuance when assigning just one singular problem to each. Chloe Darke’s character is in many ways the one with the most depth: a woman who presents herself as promiscuous and seductive, yet seems weighed down by the pressures of womanhood and her own sexuality. Her response to the bloody tissues she repeatedly pulls from under her skirt is incredibly poignant and moving; a moment of true emotion and sadness amidst the chaos.

The heavy subject matter, such as syphilis, miscarriage, and unrequited love, is handled with a perfect mix of both sincerity and light-heartedness. Pain, illness and heartbreak are interspersed with hilariously rude jokes, dancing, and slapstick. This messy patchwork of tragedy and humour truly does the characters justice, portraying them as multi-dimensional and human rather than as products of a time period with little in common to our own.

The ultimate triumph of the play is connecting a twenty-first century audience so successfully with characters from so long ago, the mark of any good period piece. It is so easy to empathise with the characters that it is hard to believe anything has even changed. Their plights and emotions seem to resonate with the audience, and it is obvious by the laughter that the bawdy humour is still a hit.

Dirty Corset ran at the Pleasance Theatre from 5th to 24th April 2022.