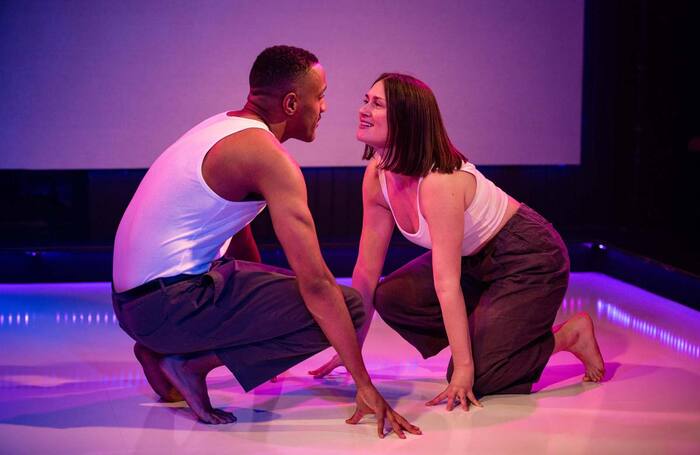 ‘Woman’ and ‘Man’ dance with each other, sometimes apart, sometimes entwined, spilling mythologies and dreams across the stage. Love, vicious and relentless, is what Philip Ridley’s play Tender Napalm (2011) endows the two actors with; it creates a heady and exhausting whirlwind. His words are uncompromised, luring the audience into the spectacle of a volatile world.

Phillip Ridley’s eighth play displays his power in writing for the stage with brutal assertiveness. The piece centres on  the interplay between a Man (Jaz Hutchins) and a Woman (Adeline Waby). It’s a two-hander that takes place on an empty pearl-white floor, splaying shadows like haunting imitators. Through their dialogue, they tell highly imaginative and improbable stories to one another, in a constant game which always keeps the opponent on the back foot. They tell stories imbued with cruel romance, describing with violence each other’s beauty and deformities, and expressing their love for one another.

Throughout the majority of the play, the audience is at a loss as to where the line between fantasy and reality lies, giving themselves up to the frequently shifting power-play between Man and Woman. In the end, an image is painted of the experience of this couple, from their first encounter to their deepest intimacies; these are hurled between each other in feverish monologues. Their love turns into venom at times, with both Man and Woman using moments of respective power to inflict pain and tenderness in turn through their fantastical stories.

The mistrust and tension between the two is expressed well by both Hutchins and Waby; their eyes never leave the other’s face, studying it with excited concentration to find a sign that will reward their scepticism, and plenty come. Throughout the play, this intensity is maintained, and Max Harrison’s direction gives the two the freedom necessary to channel their energy; they spring from one another’s clutches and hurtle around the stage, using the captured attention as weapons in some great game.

The intensity of the love portrayed requires a huge amount of concentration and physical exertion, with both actors brimming with sweat by the end. Yet while both Hutchins and Waby drive the script with energy, they lack the humility and maturity needed to carry Ridley’s demanding words. The play begins with vicious intimacy, plunging the audience into the couple’s shared consciousness without warning. For this to be conveyed as beautifully as the script allows, a space to breathe is needed that neither actor fully gives the other.

The pace of the dialogue is deceptive, and Harrison’s direction seems to misinterpret it, changing the tenderness Ridley intended into a high and heady fast-paced act. This fluctuates throughout the piece as Hutchins and Waby warm to each other, but the misjudged tone and pace never quite go away. Ridley’s grand and dizzying scale should allow for rolling emotions – from the peaks of orgasms to the depths of silent irritation. Painting the complex relationship of uncertain passion requires both settled maturity and nervous childishness, and this is what Harrison, Hutchins and Waby fail to deliver. Ellis’s lighting design eases the process by giving us moments of rose-tinted warmth that make up for the gap between the two actors. But what the script aims to deliver, an examination of how two people can come together in a chaos of grief, insecurity and euphoria to find support, is lost in Harrison’s interpretation of Ridley’s words.

The play was first performed in 2011 at the Southwark Playhouse, receiving significant praise, with Lyn Gardner’s review putting it simply as ‘so intimate you want to avert your eyes’. Although Harrison carries some of this legacy through in his adaptation, he has a tendency to push the action over areas where Ridley’s words probe intimacy in odd, hidden ways. These pieces of gold are lost, viewed as pointless to the overall movement of the couple. Given more time, they are the aspects of Ridley’s script that handle the chaos gently, but here they are wasted. Waby as ‘Woman’ is less guilty of this, convincingly flashing shades of vulnerability and anger in her strident confidence, with both actors shining at the end, when required to perform the couple’s first cervine encounter. But Hutchins as ‘Man’ has less range in his intimacy, and the chemistry that is necessary between the two falters on his end. He fails to deliver the honesty of the relationship’s giddy dance, and when performing certain passages, his inability to understand this honesty renders the connection between the two lost, leaving them as just two actors shouting at each other on a stage.

Ridley sets an enormous challenge in painting the rise and fall of love. The terrible tenderness of people weaving their identities together causes great strain, and the figures in Ridley’s script are hollow-eyed and taut with it. This is inevitably difficult to portray to an audience and, despite the energy in this production, faithfulness to Ridley’s vision has been sacrificed, and replaced with a desire to entertain.