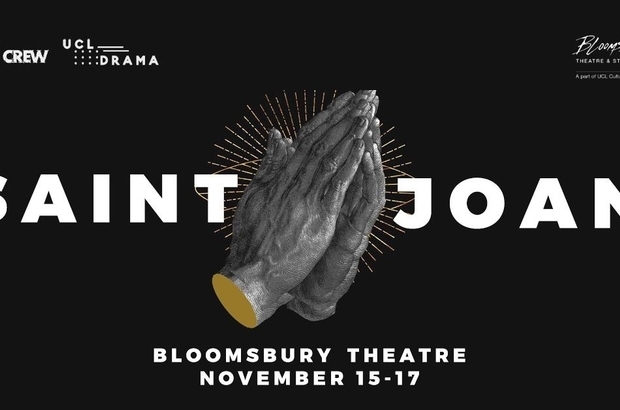 Speaking with the team behind the upcoming adaptation of George Bernard Shaw’s Saint Joan, it became clear that the biography of Joan of Arc, a French peasant girl who defied all power structures to fight during the Hundred Years’ War, will be approached from a radically new perspective. Without discounting the historical context, producer Maria Düster explains that the production will grapple with the narrative more in terms of its symbolism. The adaptation is ‘modern, without grounding itself to a prescribed time period’. She elaborates that the narrative will be ‘told through a colonial framework’: ‘the characters are symbolically separated into the “colonised” and the “colonisers’’,’ she explains, ‘as opposed to simplistically dividing up the war into England versus France’. By not ‘fixat[ing] on names and places’, the play’s themes are liberated, and allowed to be universalised.

According to Maria, Joan is ‘headstrong’ but not quite ‘anti-establishment’; she expresses an concern in applying modern terms, which, given the eponymous character lived nearly 600 years ago, seem anachronistic and reductive. ‘Joan ties herself to the faith of France,’ assistant director Udoka Maya Okonkwo explains, ‘it is this that drives all the action.’ A symbiotic relationship emerges between Joan and the people she fights for: ‘the society created Joan as much as Joan created herself’. Udoka continues that ‘Joan puts her community at the forefront and yet does not understand why she is disregarded’. Rosemary agrees with this, adding that ‘Joan is portrayed as a very immediate character who acts in the present. She serves her country with no vanity’. She hints that this idea is most potent in the epilogue: whereas ‘Joan’s martyrdom was previously watered down during the trial,’ Udoka explains, ‘the audience sees that Joan is canonised and finally praised by modern society, but in the end her glory detracts from the fact that she is still dead’.

While the play will draw out themes of colonialism and misogyny, Maria explains that their portrayal is not meant to be ‘intensely prescriptive’. The audience is not steered to ‘see the play in a particular way,’ she says. ‘There isn’t a particular message that they should take away from.’ The team weren’t afraid to play with gender, casting the traditionally older, male characters as young females, creating new tension regarding the ways in which women oppress other women. In this context, Maria’s prognosis that ‘Joan is a woman who is not believed by the patriarchal power structures’ is quite pointed. Saint Joan rejects the label of a one-dimensional feminist play, labelled as such due to the historical characterisation of Joan of Arc as archetypal heroine. Rosemary notes that this is not biographically correct: ‘Joan had a male gaze of women,’ she suggests, implying that she was not particularly supportive of other women at the time, and even looked down on them; ‘There’s a palpable difference between who Joan actually was and what her image represents’. While Joan’s resonance may have been constructed to align with certain political agendas, Rosemary states that such elevation ‘distances us from her persecution and the pain she has endured’. These conflicting views between the oppressors (the inquisitors) and the oppressed (Joan) break down the binary hero-villain dichotomy; both parties were so sure that they have respectively taken the moral high ground. ‘Sometimes you can be so sure you’re doing the right thing’, which Rosemary repeats in relation to the characters throughout the interview. The production team is interested in representing ‘Joan in real life’, or as Udoka says, portraying ‘a Joan for every age’. It is this complex dynamic, along with the way in which Shaw pens complexity in his characters, which makes the play so interesting.

Having interviewed the production team, it seems that this adaptation of Saint Joan is not interested in rarefied labels that the audience might expect of a title character typically represented as an embodiment of female courage and defiance. It is enlightening to hear of ways in which this age-old narrative will be unfolded. Udoka encapsulates these aims, noting that ‘colonialism is complex. There is no one story. When you add religion to it, it adds another level of nuance’. The team promise a refreshing, thoughtful take on a play that addresses issues that resonate both historically, and today.