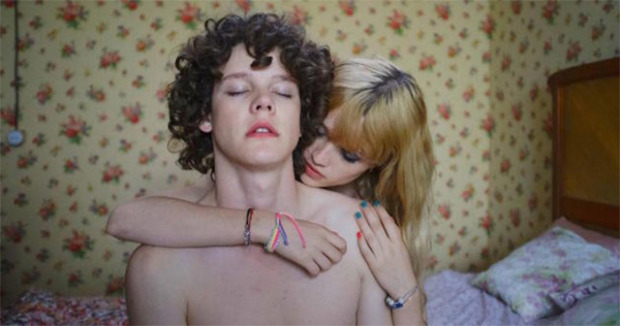 Let’s face it: excessive banging on screen is no longer the taboo that it was many years ago. From the choked dullness of 50 Shades of Grey to the creepy enticement at the centre of Eyes Wide Shut, audiences are no longer shocked by somebody flashing their penis. Husson, for the most part, is wise enough to acknowledge this. There’s nothing prudish about Bang Gang, no blushed cheek or shocked expression, and it doesn’t expect you to be amazed. The orgy scenes are shot with an overwhelming sense of excess; the frame is chock full, with tonnes of things going on at any given time. What’s abundantly clear is that these are kids that have nothing better to do than just screw about, literally.

But there’s much more on show here than what the title suggests. A cast of French up-and-comers bravely embody their characters and throw themselves fully into Husson’s vapid world. The tangled triangle of Laetitia (Daisy Broom), Gabriel (Lorenzo Lefebvre) and George (Marilyn Lima) is honestly and sensitively realised. The film, though, can’t always work out who it wants to focus on and as a result there is no constant through-line. This approach has its benefits in creating a sense of the intertwined high school cliques and the social laws that govern the classroom. Yet the film never manages to escape the fact that this approach means that one knows a bit about a lot of characters as opposed to a lot about a few, so the characters are never quite fully realised.

As with many films concerning teenagers, the picture occasionally veers into the rocky grounds of stereotype. Oldfield’s Alex, for example suffers from being a chronically cocksure, swaggering, utterly incorrigible egit. Whilst Lerebvre’s Gabriel is ‘that’ socially awkward loner with a disabled Dad to look after that proves he has a heart of gold. We’ve dealt in these stock stereotypes before. What’s frustrating is that these character traits slip in and out of the film. The film flops back onto them in its weaker moments, but it isn’t constantly relying on them. It makes it even more frustrating when otherwise well-written people suddenly become 2-D.

And yet, despite several bones of contention, Bang Gang is still an admirable first feature. This is a debut that never seems deliberately flashy or edgy, very rarely abusing its subject matter. It deals with the consequences of its protagonist’s actions in interesting and realistic ways in a final montage that ties things up in a bow. For a film with many bodily organs on display, Husson manages to put the most important one in the centre: delivering a film with balls enough to be entertaining and thought-provoking despite its weaknesses.

‘Bang Gang (A Modern Love Story)’ will be released in cinemas early next year.