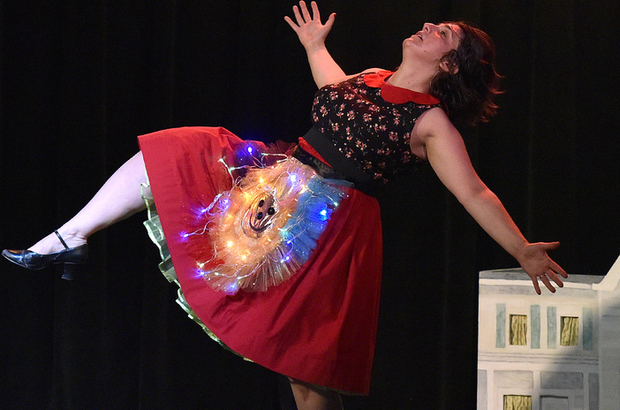 For the next week, JESS HOWLEY-WELLS will be regularly reviewing shows at the Edinburgh Fringe on gender identity and sexual politics, as part of a scheme run by the Network of Independent Critics.

Sarah Milton’s self-devised monologue is a simple but charming tale of a young girl, Daisy, battling body-image issues and a past trauma, with swimming. The set is completely bare and Daisy is clad in a black swimming costume, which is occasionally accompanied by a hoodie for the out-of-pool scenes. The focus is entirely on Daisy. Milton’s characterisation is good on the whole: she is youthful and anxious, expressing from the off that she feels herself too ‘jiggly’ to swim and her stroke too ‘feminine’ to succeed, doing a cutting impression of Kath (a fellow swimmer who appears to suffer from no such afflictions). At times, the childishness of her portrayal and her thick London/Essex accent goes too far and detracts from the subtlety of the themes – but the real shame is that the show feels too short to really get to the bottom of the issues that it begins by outlining. When her swimming teacher, Danny, says ‘Just so someone has told you – you’re good enough’, we do not get the ‘f*** you’ that should accompany the narrative of her tackling her self-confidence; it is skimmed past. Having stressed ‘this is my race’ repeatedly throughout, we do not see enough of her racing. Given twenty minutes more to expand upon moments like this, Milton’s piece would be a triumph.

When an announcement in the foyer gives the final call for everyone with tickets to Sara Juli’s Tense Vagina, it is easy to spot the people who had not heard of the show – lots of laughter, questions and gentle mockery follow. ‘That’s so Fringe’, people snigger. Surely, one would think, therein lies the necessity for such a show! Why is everyone so wound up by the word vagina? What’s going on?

Sara Juli frankly and shamelessly shares snippets of her actual diagnosis of incontinence following childbirth and what it means to be a woman with a dysfunctional vagina. This element of the show is brilliant: her deadpan face and intense attention to detail when discussing her own vagina is wonderful to witness. She re-enacts scenes with her physiotherapist that are uncomfortably funny, and the repeated instruction to the audience to join her in pelvic floor – or ‘Kegel’ – exercises is in equal parts funny and uneasy. She wittily describes the Kegel as a perfect symbol for gender inequality: when a man Kegels, his penis moves; when a woman Kegels, she says, ‘is anything happening, I can’t really tell’. She looks the men in the audience dead in the eyes as she says this.

Interspersed with these frank discussions of her diagnosis, are scenes of physical theatre relating to her journey into motherhood with a tense vagina in tow. This is where the show falls apart slightly. It is the part of the play that the folk in the foyer were anticipating. It becomes difficult to take Juli seriously as she empties a bag of vibrators onto the floor, switches them on to create music and performs a sort of interpretive dance to the sound. She darts around offering the audience snacks, tying their shoelaces, blowing their noses and tickling them. She repeats the word ‘mum’ into a microphone with an echo effect for about 5 minutes. She puts pumps on her breasts and sing/shouts Sia’s ‘Chandelier’. It becomes a bit too invasive, and there is too much of it. It is a huge shame, as it’s clear that the small audience she had gathered wanted so badly to take the subject seriously, even with respectful laughter – but the pretentiousness of it all made it borderline impossible.

If nothing else, the audience of this show is taught how to Kegel perfectly.

The B*easts is an intense and beautifully scripted exploration of the sexualisation of children, breasts and women in popular culture, and is absolutely not to be missed. Tessa, the psychotherapist of Karen (mother to Lila, the child at the centre of the story) sits centre-stage in an armchair, sipping a tumbler of something presumably alcoholic and smoking an e-cigarette. She attempts to take us through the devastating story that leads to the ‘inevitable’ (in the words of the press) rape of ten-year-old Lila from a professional, unbiased psychotherapist’s point of view – but is naturally completely incapable of doing so.

What Tessa describes is, in her words, not a ‘random and rogue flood’, but a ‘sign of climate change’. 8-year-old Lila, after obsessing over female bodies in her mother’s magazines from the age of three and being exposed to a tidal wave of blueprints for the ‘perfect woman’, twists her mother’s arm into buying her breast implants. They travel to South America, where they can get away with it – and it is done. Though this appears implausible, the show examines Lila’s society-fuelled wish to be desired and the drastic actions that are sometimes taken to make this happen – and it is devastatingly believable.

Tessa makes thought-provoking links (handled sensitively, though not necessarily sensitive in nature) to the age at which children begin to self-define as transgender. Tessa uses this analogy to examine self-definition more generally: if Lila defines as a sexual being at the age of eight, who’s job is it to take that away from her? And if we conclude, as Tessa does, that breasts are not inherently sexual, is it even possible to remove the impulse to be a woman from Lila’s very identity when it is all that she knows? When Lila returns to England, she becomes a ‘wet dream’ for the press. Pictures circulate and Lila is shamed and abused, accused of ‘asking for it’, at the age of ten. She is taken into care and Karen is taken into custody. Tessa’s determination to not point fingers allows us to truly question who is to blame for Lila’s tragic sexualisation, without looking first to Karen.

Monica Dolan (Tessa) is phenomenal. She is a woman completely run-down by trying to defend Karen and Lila, yet inflamed by the necessity to do so. It feels as though she looks every audience member in the eye, in a ‘I’m not accusing you, but I am’ kind of way, and she succeeds in creating a fraught tragi-comic tension. This one-woman show is entirely compelling and utterly heart-breaking, and demands the audience and society at large to assess its perversion of young people.