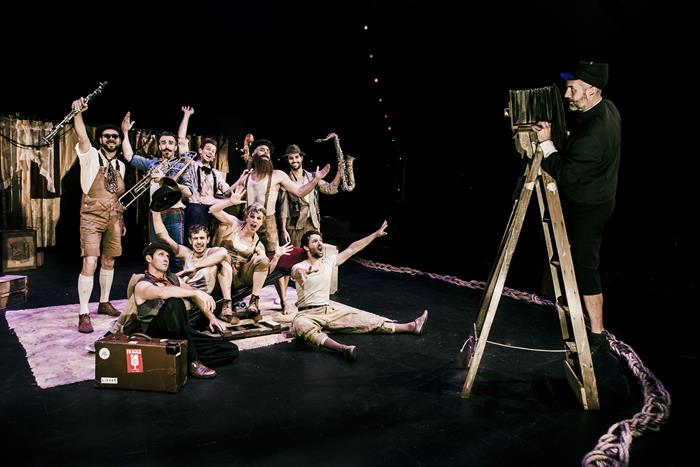 BECCA BAINBRIDGE reviews ‘Scotch and Soda’ at the London Wonderground at the Southbank Centre.

In a programme chock-a-block with quirky acts, ‘Scotch and Soda’ at the London Wonderground stands apart from the eclectic line-up by erring on the side of the weird and the wonderful. It is a spectacle to behold, albeit with rather bawdy overtones, as the raffish charm of dishevelled acrobats alongside shabbily-apparelled musicians evokes a sense of nostalgia for the Victorian touring circuses. Yet the show remains timeless – a blend of the new and old and the downright bizarre. The visual marvel of the acrobatic performances by Company 2 meets the unconventional instrumentation of the Crusty Suitcase Band’s musical accompaniment: a kooky pairing of acrobatics and jazz that makes for an evening jam-packed with vibrant personalities.

Where other circus-esque shows fall short of being truly engaging, ‘Scotch and Soda’ excels using historical characters and real stories from the circus and Australian outback to create a vividly imagined web of relationships. The show hinges upon the pervading camaraderie between and within the two troupes of artists, a tongue-in-cheek trust to which the audience cannot help but respond, raising a smile or an eyebrow. The use of scruffy props, from empty champagne bottles to disused crates and well-thumbed cards, means the aesthetic of the show is successfully maintained from beginning to end. This visual continuity accelerates the momentum of the underlying storyline, producing a unity between segments while developing characters and cultivating their relationships with each other. 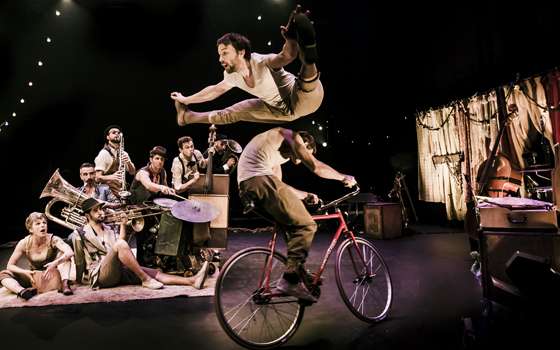 The feisty Chelsea McGuffin and dashing David Carberry, the co-founders of Company 2, have assembled a multi-talented group without rival. Carberry and Skip Walker Milne’s whimsical interactions in particular deliver moments that are nothing short of phenomena (who knew that a man could perform highly challenging gymnastics at the top of a pole balanced on another man’s shoulder?). The acrobatic fight scene is a delight to witness and proves that the troupe have the acting ability to convincingly emote even whilst performing physically arduous and painstakingly timed manoeuvres. Kate Muntz’s rope-work, despite impending peril at the misplacement of a limb, engenders a tranquil mood with the assistance of an alteration in musical tone, offering the audience relief from the more frenetic sequences that, subsequently, increases their intensity.

There is but one criticism to be voiced: the gratuitous inclusion of nudity or, in this case, the musically-timed and seemingly protracted flashing of genitals. Mozes, sporting a fluffy beard, strong eyebrows and facial tattoo, would be conspicuous without this compulsion to expose himself because he is a remarkably skilled acrobat. It is almost a shame that this somewhat mars the show (on two occasions) as a step too far into lewdness, spoiling the playful but innocuous suggestion of bawdry that is otherwise amusing during the show.

Nevertheless, in the cramped space of a small stage and a lower tent top, ‘Scotch and Soda’ demands a greater degree of dexterity from its performers and provides a more intimate experience for an audience. With the inclusion of the Crusty Suitcase Band’s homemade instruments – a tennis racket, spade, and trumpet-cum-trombone hybrid – the show quickly becomes a departure from the unusual to the charmingly outlandish.

For an evening where riding a bike is made to look extremely easy (no amount of practise could have the layman carrying two extra passengers vertically!), the see-saw is no longer a thing of the children’s playground, and card games become a feat of physical agility, Company 2 and the Crusty Suitcase Band are the artists to consult. To satisfy any desire for the curiously beautiful see ‘Scotch and Soda’, they provide it in abundance.

‘Scotch and Soda’ continues until the 2nd August at the London Wonderground at the Southbank Centre. For tickets and more information: http://www.londonwonderground.co.uk/whats-on/scotch-soda