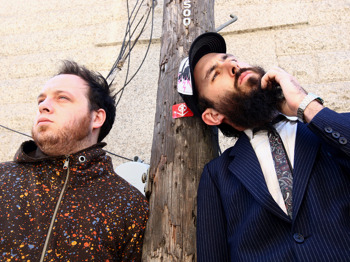 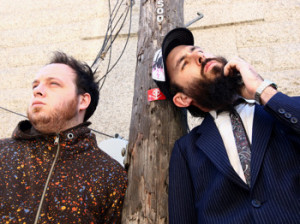 If you have yet to hear this comical electro hip-hop band, then they should be on your next must-listen-to list. Scroobius Pip + Dan le Sac were first known for their song ‘Thou Shalt Always Kill’ a parody about people following the norm, and not thinking for themselves – sung and rapped by Scroobius Pip, with engaging beats by Dan le Sac.

Onstage, the two are awesome performers, creating different scenes and atmospheres for each song. – Scroob was sitting on a chesterfield with a book for the song ‘Story Time’, and outfit changes during songs for the varying characters played in their set.

Scroob and Dan love the crowd and are known for it, interacting and laughing with us all. Scroob signing merchandise before the Birmingham show I attended, as well as causing a huge queue with everybody trying to see him. So, admirably, after the show he was waiting outside the venue for photographs and general chitchat. I was one of the lucky souls to get a photo, having a cheeky grope of his magnificent beard!!

Scroobius Pip started his musical career driving around, and sleeping, in an old Toyota and playing outside other peoples’ gigs at the end. He told me sleeping in a car made shaving quite tricky, and so he just allowed the beard to grow. Which is now a pretty prominent physical feature, as you can see below.

The two are currently on their European Tour having sold out all major venues in Sheffield, Leeds and Birmingham, just to name a few. They will be returning to their hometown, London, for two nights’ performances at Koko in Camden on the 3rd and 4th of February. Get down there if you can!