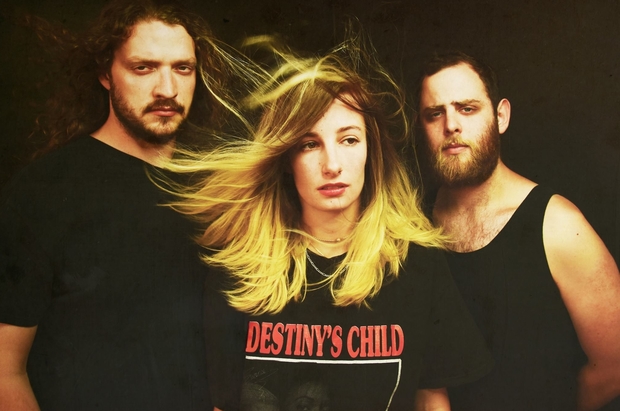 I love the sustained imagery in this album of water and the sea; there is also a lot of imagery related to dirt and grime. Do you view this album as a narrative or a collection of individual stories?

I think of this album as a collection of music and poetry, where the songs connect to each other through reoccurring themes. This is the first album where I have felt a sense of continuity and surrealist imagery throughout most of the songs. You are spot on to notice the water as well as the dirt! The other theme present on most of this record is dreams.

Some artists have talked about how fun it is to wrong-foot listeners, and trick them into thinking that songs have narratives when they don’t always do – there is a power in ambiguity. Do you have things that you want your listeners to ‘get’ when they listen to your songs?

No. I agree with you about the power of ambiguity! I like hearing different peoples’ takes on our music. I like work that speaks for itself but also leaves room for listeners to interpret independently, and relate it to their own experience.

I really like how your lyrics defy cliché. They always surprise me – like in ‘Pseudo Culture’, where you write ‘I heard your hair grew, I heard you wear make up/ I heard you make up all of the stories you tell’ (my favourite lyric on the album). Do you think it’s becoming increasingly difficult as a songwriter to avoid clichéd writing, as there is so much material out there now?

I wrote that song almost a decade ago, believe it or not! For me, it is not difficult to avoid cliches. They do not come to me naturally. I have been learning this about myself recently as I try to write more for other artists and experiment with more commercial genres of music. Throughout my life I have always thought certain things were quite obvious, and then realized they were not. This can be good for creativity, but it also makes for some isolating times. For instance, I went to a prom where the theme was “The Seven Deadly Sins”, and I assumed the majority of people would dress as a sloth. They didn’t— most people went as “lust”. Their outfits were a bit sexier than mine. That is, depending on your definition of sexy.

Online platforms like Spotify and Apple Music are changing the way in which listeners consume music – nowadays it’s rarer for a young person to sit down and listen to an album in order, in one go, like they would read a book. How do you think this changes how music is made – does it change it for you?

When deciding the order of an album, I push the digital age out of my mind completely. Our intention is to make a record that flows well and works together as a body of music. I believe in making music for the best case scenario, which is that someone sits down with a record player and listens to the whole thing front to back. I know that realistically, many people will only listen to a single track. This doesn’t bother be either. To each their own, I say!

Playing live is becoming more and more essential nowadays – how would you say the music changes from a studio setting to a live one? Do you prefer playing live or writing/recording material?

When recording music in a studio, you can do multiple takes. Often one focuses on playing the part with extreme precision. When we play live, we like to let that go and instead try to be present with the audience. It is always fun to incorporate improv into sets – this is part of the reason we include solos. There are times that I prefer playing live, and others where I would rather focus on writing or recording. It all depends on where my bandmates and I are at energetically.

A lot of people are throwing around phrases like ‘the death of guitar music’ at the moment – and you guys are obviously a guitar band. Do you think that within our lifetime we will see the demise of guitar music?

I do not think we will see the demise of guitar music in our lifetime. Clearly there has been a great decline in peoples’ interest in guitar music on mainstream radio, but there will always be people who love it. “Rock & roll is here to stay”. And so is the blues, jazz, funk, classical music – tons of genres. It’s not going anywhere for me.

How open would you be as a band to experimenting with something different from guitar based rock? Do you think that it’s important for a band to maintain some musical consistency?

We are completely open to music outside of rock. Frankly, I can grow tired of rock music quite easily and desire to listen to and play something else. It is generally something less aggressive that has a lot going on harmonically. I have been trying to get a lot better at jazz piano as well as consider instrumental music. My bandmates are I all love a really wide range of music and are not afraid to incorporate them into our sound.

What do you think about how social media influences bands nowadays? Do you have a particular online image or ‘look’ that you try to cultivate as a band?

Social media is simultaneously really simple and also very confusing. In the end, I think the best move for everybody in the world is not to obsess over it and make an effort to be more present.

Everything is very neatly packaged – do you think that record labels are afraid to take risks right now?

Definitely. There used to be a lot of money in the music industry, particularly in rock music. That is no longer the case and a lot of people are not game to put money on the line if they aren’t confident it is toward music that has mass appeal.

You guys are signed to a label. Artists like Morrissey have sung in the past about the difficulties and compromises that come with being a signed artist. Do you think record labels aid or stifle creativity?

I feel as though our current label, Dangerbird Records, helps enable our creativity. They give us all of the creative control and are always open to new ideas. I feel supported and encouraged by them, and have an overall sense of artistic freedom. It is an increasingly rare thing for a label to help you out financially and also let you take creative risks. Especially if those risks don’t create a particularly commercial product. We work with a really great team of people overall. This is part of the reason we signed with an independent label as opposed to a major— it allows more space for artistic growth, with less pressure to create something palatable in order to recoup massive amounts of money.