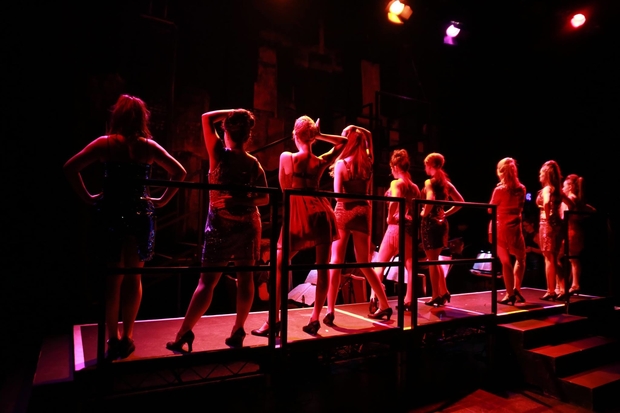 It’s that time of year when students experience the mid-term slump. It is almost reading week (for some at least), but there are still deadlines, course-works, lectures and (God forbid) examinations. The weather is grim and Donald Trump is in the White House. Everything feels a bit rotten. Fortunately, Sweet Charity provides a temporary relief from the January/February, pre-reading week, post-truth era blues: a suitably funny, light-hearted and thoroughly entertaining production that nonetheless features instances of pathos as Charity’s dreams of romance are persistently thwarted by the men in her life. I had no idea quite how many notable musical numbers the show contains: Hey Big Spender, The Rhythm of Life and If My Friends Could See Me Now all feature, and are sung with aplomb by the ensemble and soloists.

The ambitious choreography, musical ensembles and sheer amount of dialogue are partly what make UCL Musical Theatre Society’s latest offering so impressive; especially as the cast and crew had a limited number of weeks to rehearse until the opening night. The show was written in 1966 by C.Y. Coleman and lyricist Dorothy Fields and follows the life of a dancer-for-hire at the Times Square Dance Hall. As a disembodied voice tells us at the beginning of the show, Charity Hope Valentine is a woman who ‘just wants to be loved’. Alas, for poor Charity, love is somewhat hard to find – at least, that which endures. Despite her warm-hearted and generous nature, the right person never seems to comes along. Falling in love with one unsuitable man after another, she experiences a series of rejections – none of which ever succeed in diminishing her joy for life, which is more than a little infectious.

What is especially poignant about Charity’s character is her near proximity to the high life of film and theatre and her chasmic distance from it. She embodies the spirit of the American Dream, chasing after a better life without ever managing to escape from the seedy simulacrum of Broadway glamour that is the Fandango dance-hall. Grace Roberts shines as the eponymous Charity: deftly conveying the character’s warmth and cheerfulness, as well as her innocence and vulnerability. Her chance encounter with the Italian film-star Vittorio, played with charm by Charlie Smith, is comically artificial and yet strangely real; highlighting yet again the blurred division between fiction and reality.  There is a well-directed moment when, bearing Vittorio’s hat and cane, Charity sings ‘If my Friends Could See Me Now’, stepping into the spotlight and looking out into the audience with a twinkle in her eye. Grace convincingly expresses the hopefulness of the character and her willingness to believe in love; though above all it is her powerful voice that impresses: exactly the sort required for the big songs that feature in Sweet Charity.

Pilar Martin Hernandez and Julia Ravey make a wonderful comic duo as Charity’s dance-hall buddies Nikki and Helene: yet another pair of women cut-off from their ambitions, as expressed in the well-performed song: ‘There’s Gotta Be Something Better Than This.’ They effectively convey the maturity of the older dance hall hostesses, as well as the affection they feel for Charity. Sam Thomas is excellent as the overly-anxious Oscar, demonstrating a terrific nervous energy and great comic timing: indeed, his elevator scene with Charity is one of the highlights of the show. He successfully evokes the ambiguity of the character, as someone who is shy and strangely likeable, but whose lack of judgement and delusions are extremely damaging; constructing for himself a virginal image of Charity that has little foundation in reality. There are similarly strong performances from Catrin Harris, as Vittorio’s passionate love-interest Ursula, and Simon Whitaker as the unsavoury dance-hall owner, while Abel Law is certainly memorable as the be-wigged Daddy Brubeck.

The set design for the production is simple but effective, featuring an understated backdrop of New York City and metal stairs. The metal glowing frames, used variably by the cast to create closets, rooms and an elevator, are also an innovative way of quickly setting a scene. Technical difficulties did slightly detract from the performance: feedback from the mics visibly distracted the cast and often made it hard for the audience to hear what was being said or sung. Fortunately, instances of sound distortion became less frequent as the show progressed and the cast became noticeably more confident in their performances. Later scenes and songs had more of an impact and the second act went smoothly, ending the production on a definite high. The production as a whole was hugely successful and provided a much-needed buzz. ‘I Love to Cry at Weddings’ was a wonderful final song and certainly left a sweet taste after a generally sweet production.