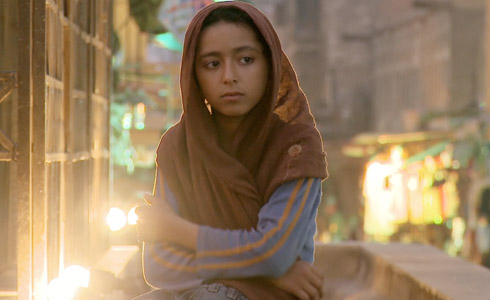 LAURIE CHEN visited the London Human Rights Watch Film Festival to check out the ‘vividly human stories’ portrayed in The Dream of Shahrazad and interview Francois Verster, the film’s director.

“Each of us has a story of our own, and each of us is the hero of our own story,” a member of a Cairo theatre troupe tells the camera as his colleagues re-enact the tragedies of the Arab uprising through music and drama. In The Dream of Shahrazad, storytelling takes on a central significance for both the eponymous heroine of The 1001 Arabian Nights and the modern-day citizens trying to rebuild their lives in the devastating aftermath of civil strife and government oppression.

The figure of Princess Shahrazad is an interesting choice for the film’s central metaphor: in the classic Arabian fairytale, she tells stories over 1001 successive nights in order to save numerous lives from her murderous husband, Sultan Shahriyar. Centuries later, the Russian composer Rimsky-Korsakov was inspired to write a dazzling symphonic suite named after the heroine which is now a mainstay of the orchestral repertoire.

In a similar way, director Francois Verster attempts to weave together the strands of music, politics, drama and storytelling into a multi-faceted cinematic tapestry documenting the lives of several ordinary people going through extraordinary circumstances in the Middle East. Throughout the film, the traditional story of Shahrazad – visualized in animated excerpts – and the music of the symphonic suite both act as a backbone structure to the rather fragmented footage of Verster’s subjects: there is the aforementioned theatre troupe who offer performances to their Egyptian crowds as a kind of mass therapy; an artist who finally manages to create a massive tapestry depicting Shahrazad as the woman of his dreams; a young Lebanese internet activist who finds her voice, and a Turkish youth orchestra who triumphantly perform Rimsky-Korsakov’s piece to make a political statement in their homeland.

These individual stories may initially seem a bit too kaleidoscopic in their sheer diversity, but Verster manages to foreground his characters’ undaunted desire to keep telling stories and creating art in the face of inhuman oppression. Reminders of political unrest are never far away in the film; part of its devastating emotive power comes from the use of real-life footage of demonstrations that are, by now, starkly familiar to us from TV news coverage of the Arab Spring.

In this vein, the beauty of music and artistic creation is continually juxtaposed with the violence of the uprising. A scene of children performing a play is cruelly spliced with grainy CCTV footage of a military policeman repeatedly slapping a citizen in the face, almost as if the video recording had somehow stalled itself into a loop at that very point. Later on, footage of demonstrators clashing with lines of armed military police in Tahrir Square coincides with the climax of the musical piece; crowds of people are forced to scramble in heaps when faced with the relentless onslaught of tanks and truncheons.

However, amidst this backdrop of political turmoil lie the vividly human stories of everyday personal struggle that are so well documented by the film itself. What makes The Dream of Shahrazad so special is that these individual stories are woven into part of a collective human fabric of life, death, joy and sorrow. By the end of the film, it is clear that no government regime can stifle the creativity and imagination of people who are desperately seeking a voice with which they can tell their stories.

Your films seem to have a running theme of social injustice. So what drew you initially to make a film about the Arab Spring?

Actually, the film wasn’t initially intended to be specifically about the Arab Spring – we started developing the film in 2007 and then we started filming in 2010, at that time people were just feeling more and more fed up with how hopeless the situation was in their country. So when the events of January 2011 happened it was just like a gift for the film. By then, it was clear that Shahrazad became a metaphor for the people of Egypt: there’s a sense of people rising up to peacefully demand change, telling their own stories to make the world a better place.

So rather than being a film simply about the Arab Spring, it locates it in a far broader cultural and historical framework – not a single isolated event or protest, but more like part of an ongoing process. What I also like to think about the film is that it’s not just about protest art; it looks at the interactions between life, art and politics in a far more fluid kind of way.

Your film focuses on a variety of different subjects and their stories interweaving together. How important is it for you as a filmmaker to build authentic connections with the people you film?

Unlike my previous films, for this film we very much came in as outsiders since I couldn’t speak Arabic or Turkish at the time. Being an outsider to a situation is a very complex position: in a way, it’s a problem because you don’t understand what’s going on, but in another way you see things that insiders cannot, so it’s much like a double-edged sword. When we finally showed them the rough cut in Egypt, people were telling me that this is the film that most accurately captures their experience over the last few years. This was a huge compliment for me; somehow by not claiming that we fully understood everything that was going on, I think we reflected the situation more honestly and truthfully.

In my previous films I started working more explicitly with music, and I was trying to think of interesting ways to work with music as a form in documentary. The problem with a lot of ‘commercial’ documentaries is the huge demand from commissioning editors for a film with a linear character narrative. I think that’s usually problematic because life doesn’t work like that – it’s much more layered, much like how storytelling in the traditional sense is a lot more fluid. So I guess it’s also a fluid, quite organic form of human expression that’s not limited to as many rules and limitations as writing a documentary might be.

Apparently Shahrazad has great significance in the Arab world – she’s like a proto-feminist figure in a way. In your opinion, does the metaphor of Shahrazad help give a voice to Arab women?

That’s a debatable point. I would like to say yes, but there are so many different shades to Shahrazad. In the film you can see that the artist Hani has a sexualized, romantic idea of Shahrazad but at the same time she also fulfills a very strong political function – like he says, he himself is also a Shahrazad. You get a lot of young Arab poets or bloggers who call themselves Shahrazad; I think a lot of people see her as someone who’s creative, who gives inspiration, who takes life into her own hands and has the courage to use whatever means she can within an oppressive system to try to make the world a better place.