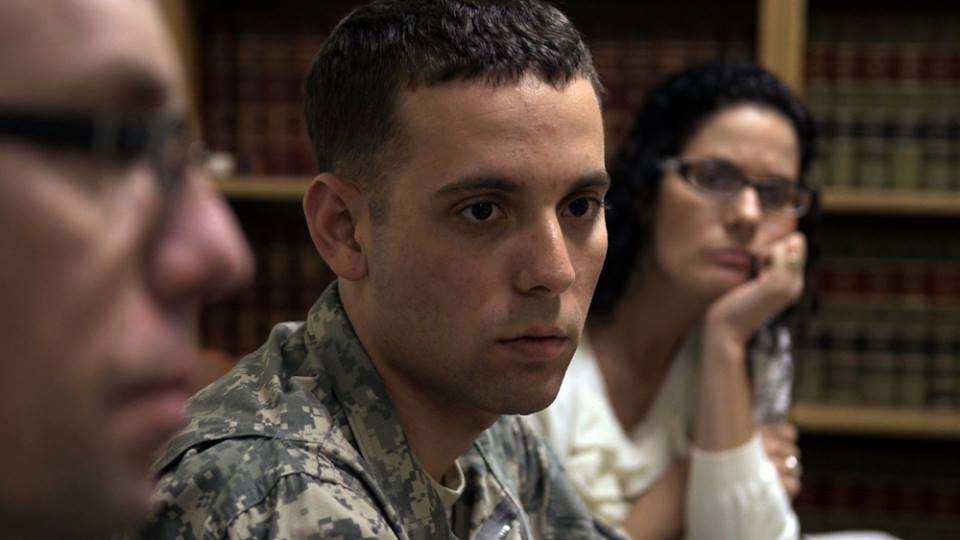 LUCY FEIBUSCH reviews THE KILL TEAM DOCUMENTARY and the Q & A with its DIRECTOR, DAN KRAUSS, organised through THE DOC HOUSE at THE RICH MIX CINEMA

Adam Winfield was part of a platoon that began killing Afghans for sport. The Kill Team follows Adam’s unique position as both a whistle-blower and a murder suspect, in a stunningly personal tale, informing its shocked audience about the inhumanities that occur during war.

The moving documentary shows terrifyingly stark images of American soldiers posing around their prized human ‘kills’, smiling proudly. Sergeant Gibbs was the ringleader, a fierce man who wore a necklace of Afghans’ finger bones. The audience’s minds are put to work as we attempt to reconcile this devastation and immorality with the faith regular citizens put in their troops. The Kill Team looks at how the psychology of young boys is heavily affected when put into war zones, and specifically here, confronted with enemies both on the ground and inside your own platoon.

It is not implied that Adam was completely innocent. Regardless of the defence of extreme peer pressure, he did participate in murder. However, Adam’s sincerity and multiple attempts to alert his father and forces higher than him of the misdeeds being committed were taken into account.

Adam’s attitude was heavily contrasted with another solider from his platoon, Stoner. Stoner had no part in the killings and he too was a whistle-blower; however, he continually used the pronoun ‘we’ when talking about his killing platoon team. He wanted to be involved, and would rather be seen as one of the men – murderer or not – than a tell-tale.

The Kill Team is a brilliant documentary, enlightening viewers to the extreme conditions and atrocities that can happen at war. The contrasting individual testimonies of the soldiers in this platoon make it hauntingly personal.

QUESTION AND ANSWER WITH DAN KRAUSS, THE DIRECTOR OF THE KILL TEAM

After the film, the audience had the privilege of speaking to the director, Dan Krauss, live through transatlantic Skype.

Krauss spoke about his decision not to blur the victims faces, he said that although ‘blurring the victims respectable thing to do, it would made them objects, not human being – which is where the problem started in the first place’.

Taking my opportunity, I asked about the part of the documentary I disagreed with: why did Krauss decide to heavily humanise Adam and the Afghan victims, while drastically dehumanising the kill team ringleader, Sergeant Gibbs? While childhood footage of Adam of him innocently playing as a boy, Sergeant Gibbs face was shown once, while wearing sunglasses, in uniform.

Krauss said that there was ‘no way of getting access to Gibbs, so he grew to mythic proportions’. He was synonymised with ‘a mind-set, a psychology’. Indeed, Krauss said that Sergeant Gibbs’ ‘absence made [the documentary] better… his denial would have distrusted the truth behind the film’

Although Gibbs is guilty of more than a lifetime’s worth of murder, intentionally reducing him to nothing more than a killing machine is unproductive. Viewing a human being as an object mimics Gibbs’ own abhorrent mind-set, and should not be intentionally reproduced in the documentary that is bringing his crimes to light.

However, every other aspect of the documentary was faultlessly executed and powerfully stirring.

Krauss explained to this audience how he was drawn to the story because of an article in the New York Times, September 2011, wherein Adam’s unique position as victim and potential murderer was described. Krauss found it hard to reconcile how one person could embody ‘both ends of the moral spectrum’. He therefore became an unpaid consultant for the trial, giving him unlimited access to Winfield’s family, lawyer and legal proceedings. As a member of the defence team, the film could not be used, edited or superseded by government, which allowed for depictions of raw truths.

Krauss told of how one of the soldiers, Morlock, participated in The Kill Team because he ‘wanted to have a voice, as the US government was the only person holding the microphone.’ Krauss saw members of the platoon, like Morlock, as ‘victims of an institution’.

The Kill Team is a revealing, thought-provoking documentary, which was enhanced by the fantastic opportunity to speak with Director, Dan Krauss.

Keep your eyes on The Doc House and The Rich Mix Cinema for more opportunities like this one.