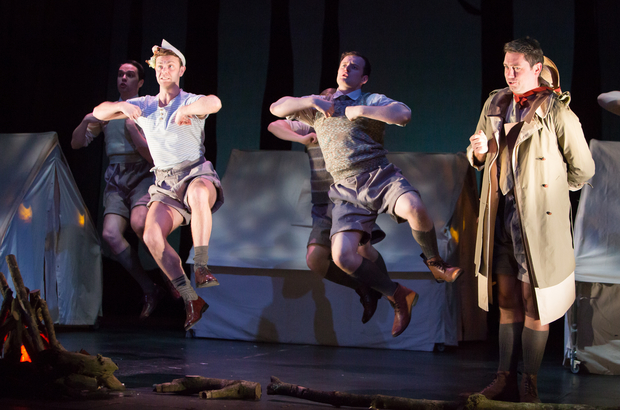 AMY MACPHERSON reviews Gilbert and Sullivan’s The Mikado at the Richmond Theatre.

As is to be expected from a Victorian operetta set in a fictionalised Japan, performances of The Mikado have attracted a great deal of controversy over the years for its perceived caricatures of Japanese people. The original performance at the Savoy Theatre in 1885 featured actors such as George Grossmith (co-author of comedic novel ‘The Diary of a Nobody’ (1885) with his brother Weedon Grossmith) in ‘yellow-face’. As Josephine Lee writes in The Japan of Pure Invention: Gilbert and Sullivan’s ‘The Mikado’ (2004), a 2004 production involved ‘a man with a Fu Manchu mustache and impossibly long fingernails.’ Most theatre companies have avoided such controversy either by employing a cast of Asian actors or setting the action somewhere else.

In Sasha Regan’s all male production of Gilbert and Sullivan’s classic, the operetta is still nominally set in the imagined Japanese kingdom of Titipu, as the chorus gleefully inform us in the opening number: ‘If you want to know who we are…’, professing themselves to be ‘… gentlemen of Japan.’ But aside from the occasional reference to the location or the Emperor’s title ‘Mikado’, there is very little else to suggest that this is indeed the setting. The characters in their grey high-waist shorts, high-knee socks and braces most resemble boy-scouts on an ill-advised expedition – the set of tents and tree silhouettes against a backdrop of blues and purples only reinforces this impression. Badminton rackets take the place of fans, and cricket bats replace scimitars as deadly implements of decapitation.

The Mikado was originally intended by Gilbert and Sullivan as a satire of England and Englishness, rather than of Japan: the foreign context was mainly contrived as a medium through which to comment on the issues in the writers’ own country, such as governmental nepotism, emphasis on family ancestry and the prudery of Victorian etiquette and society. In Regan’s production, the satire is a little closer to home, poking fun at Londoners and Richmond-living (where the production played in London). One of the highlights of the show is David McKechnie’s performance of ‘As some day it may happen’ as the Lord High Executioner Ko-Ko, in which he sings about the kind of people whose loss, as he puts it, ‘would be a distinct gain to society.’ His list of men and women deserving of the chop includes vegetarians, irritating colleagues and sandaled liberals. These are executees of the metropolitan variety. There are also references during the show to the familiar sight of ‘No Ball Games’ signs found in London residential areas, and the appearance of a bicycle midway through the production is suggestive. Ko-Ko himself is portrayed by Mckechnie as something of a cockney geezer, which fits well with this rendition.

The most defining element of the show is the all-male cast. In addition to The Mikado’s controversial setting, Gilbert and Sullivan musicals have historically received criticism of their representation of women: the female characters range between that of flibbertigibbet maidens without a noodle of intelligence and the jilted mature woman of unprepossessing appearance, whose advances upon a strapping young gentleman are far from welcome. Having men in the role of these female stock characters enhances the comedic potential of the show and is a device exploited very well by the cast. The chorus of young maidens, though dressed no differently from the male characters save for a few flowers in their hair, were uncannily feminine, and their stereotypically girlish giggles and frivolous antics were for the most part suitably ludicrous.

However, there were occasionally missed opportunities for comedy. A little more flamboyancy on the part of the male and the female characters could have provided the audience with a few more laughs. More colourful costumes for peacock characters such as Pooh-Ba and the Mikado could have also elevated the comic atmosphere of the show. Furthermore, the cast were at times a little too static and some of the musical numbers could have done with a little more energy. This improved as the show progressed and the actors hit their stride. The ballet in between scenes, with the male chorus prancing around, their faces plastered with grins of elation, was a delight to watch. Another of the show’s greatest strengths was the vocals of some of its main female characters: leading lady Yum-Yum, played by Alan Richardson, frequently sustains a powerful vibrato on notes at the top of end of the treble stave. The interaction between the character of Katisha (Alex Weatherhill) and Ko-Ko was also very entertaining and the Mikado (James Waud), who appears in act two, was appositely camp.

Sasha Regan’s gender-bending rendition of The Mikado is on the whole entertaining, with some stand-out performances among the cast. There were moments when opportunities for comedy were missed, but individual musical numbers were well-executed and the singing and dancing of the chorus and leading players was impressive. This was a very enjoyable performance which, from the sound of the applause at the end of the show, was well-received by the audience.

The Mikado is on tour now until July 29th.  Find more information here.